Astronomers from the University of Göttingen in Germany have discovered two, and possibly three, super-Earth exoplanets orbiting the nearby red dwarf star Gliese-887. 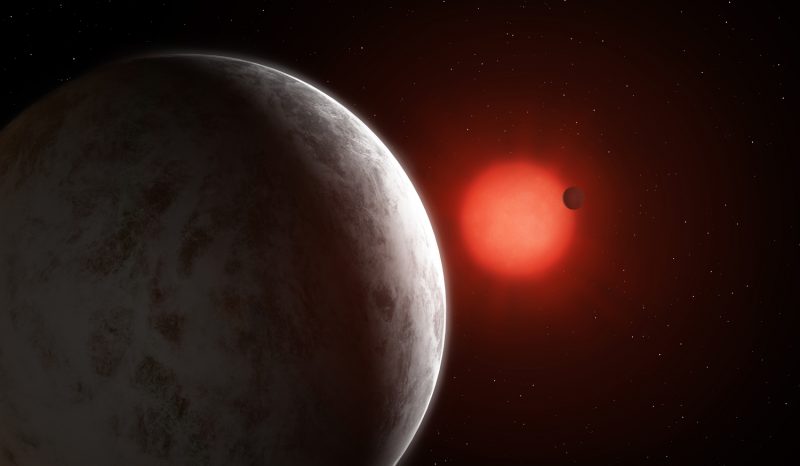 Artist’s concept of Gliese 887b and Gliese 887c orbiting their red dwarf star. Image via Mark Garlick/ University of Göttingen.

Among the various types of exoplanets discovered so far, those larger than Earth but smaller than Neptune are among the most common. Astronomers call these worlds super-Earths. The nearby TRAPPIST-1 planetary system actually has seven known super-Earths orbiting its star! Now, RedDots researchers at the University of Göttingen in Germany have announced the discovery of another nearby planetary system with at least two super-Earths and possibly a third.

Details of the peer-reviewed findings have been published in the June 26, 2020, issue of the journal Science.

The two planets are orbiting the nearby red dwarf star called Gliese 887 (also known as GJ 887 or Lacaille 9352), which is only 11 light-years away. While not quite within the habitable zone, where liquid water could exist on the surface of rocky worlds, the planets are close to the inner edge of the zone. According to the abstract of the new paper:

The closest exoplanets to the sun provide opportunities for detailed characterization of planets outside the solar system. We report the discovery, using radial velocity measurements, of a compact multiplanet system of super-Earth exoplanets orbiting the nearby red dwarf star GJ 887. The two planets have orbital periods of 9.3 and 21.8 days. Assuming an Earth-like albedo, the equilibrium temperature of the 21.8-day planet is ~350 kelvin [77 Celsius or 170 Fahrenheit]. The planets are interior to, but close to the inner edge of, the liquid-water habitable zone. We also detect an unconfirmed signal with a period of ~50 days, which could correspond to a third super-Earth in a more temperate orbit. Our observations show that GJ 887 has photometric variability below 500 parts per million, which is unusually quiet for a red dwarf.

Illustration depicting the size of a super-Earth called CoRoT-7b. Super-Earths are larger and more massive than Earth, but smaller and less massive than Neptune. Image via Aldaron/ Wikipedia. 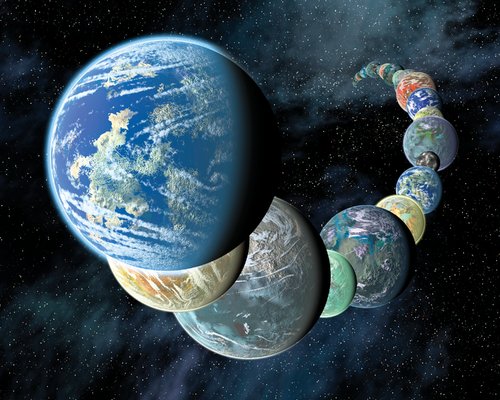 Super-Earths are one of the most common types of planets in our galaxy. Some of them may be habitable for some kind of life to exist. Image via NASA/ JPL-Caltech/ R. Hurt (SSC-Caltech)/ Earth Magazine.

The temperature of Gliese 887c has been estimated at 158 degrees Fahrenheit (70 degrees Celsius). A bit hot, but perhaps not enough to render the planet uninhabitable. If the third planet does exist, it could have cooler temperatures since it is in a more temperate orbit within the habitable zone.

The planets were discovered using the “Doppler Wobble” technique, which enables the researchers to measure the tiny back and forth wobbles of the star caused by the gravitational pull of the planets. The researchers used the High Accuracy Radial velocity Planet Searcher (HARPS) spectrograph at the European Southern Observatory (ESO) in Chile.

Red dwarf stars, although smaller and dimmer than our sun, are known for typically being very active, emitting strong bursts of radiation that could strip close-in planets of their atmospheres and make conditions difficult or impossible for life to exist. But Gliese 887 has only a very few star spots and appears to be less active than most red dwarfs. That’s good news for the possibility of any of the planets retaining their atmospheres and perhaps being habitable.

If someone had to live around a red dwarf, they would want to choose a quieter star like GJ 887. If further observations confirm the presence of the third planet in the habitable zone, then GJ 887 could become one of the most studied planetary systems in the solar neighborhood. 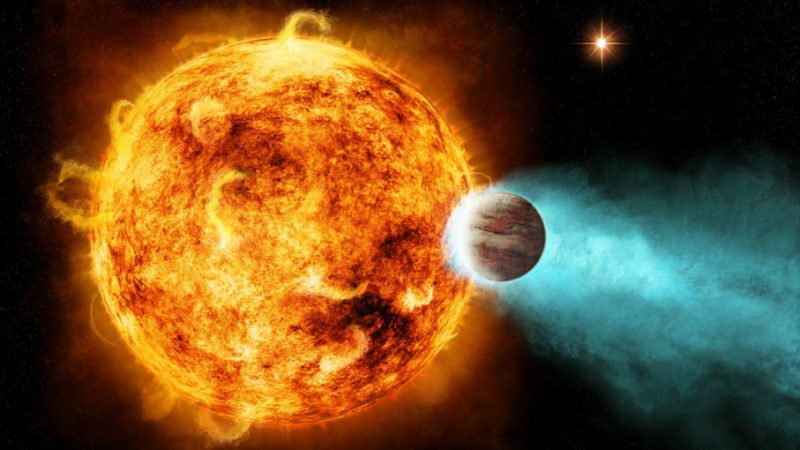 Red dwarf stars are known for being very active, emitting powerful blasts of solar radiation, which can strip atmospheres off planets that are too close, as in this artist’s concept. But Gliese 887 is less active than most red dwarfs, increasing the chance that some of its planets might be potentially habitable. Image via NASA/ Ames/ JPL-Caltech/ HowStuffWorks.

The Gliese 887 worlds will also be ideal candidates for follow-up studies by the upcoming James Webb Space Telescope (JWST), not only because they are close by, but also because the brightness of the star is almost constant, making it easier to detect any atmospheres. As Sandra Jeffers, from the University of Göttingen and lead author of the study, said in a statement:

These planets will provide the best possibilities for more detailed studies, including the search for life outside our solar system.

The discovery reinforces two previous findings about exoplanets: one, super-Earth worlds are common (as well as Earth-sized planets), even though there isn’t one in our solar system (unless the elusive Planet Nine turns out to be one, as some scientists think), and two, exoplanets are abundant around red dwarf stars, which are the most common stars in our galaxy. This is exciting, since many, if not most, super-Earths are thought to be rocky like our own planet. But we still don’t know how habitable these kinds of worlds could be. Scientists think that some super-Earths could have extensive or even global oceans. Others might be dry and barren.

New upcoming telescopes like JWST will be able to take a closer look at some of these worlds, and provide a much better idea of what the actual conditions are like. If there are millions or billions of them in our galaxy, as seems likely – and scientists now say there are more exoplanets in total than stars, including an estimated six billion ‘Earth-like’ planets – then it seems reasonable that some of them should be potentially habitable.

Via University of Göttingen