Rovers on Mars today are amazing, but slow, and still mostly controlled by humans back on Earth. Europe is testing new self-driving software to help future Mars rovers travel faster and farther each day. 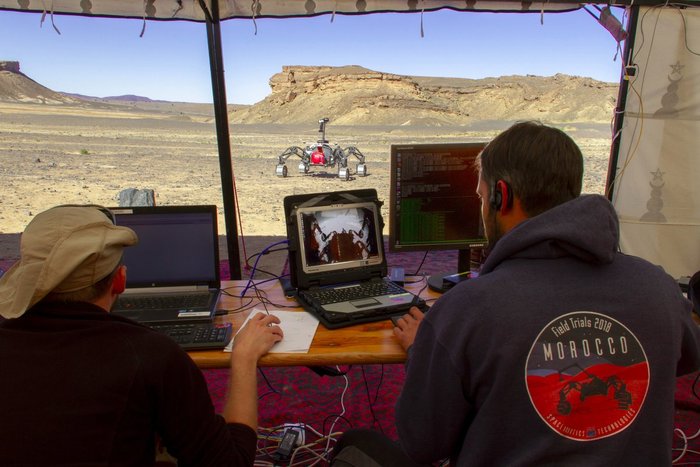 Engineers watch the progress of one of the test rovers in Morocco. Image via ESA.

Despite the fact that landing on Mars is hard, robotic rovers and landers have now become a regular feature of Mars exploration. These advanced exploratory machines are sending back unprecedented information about this fascinating red world. One limitation, however, has been that rovers and landers are still, for the most part, controlled by human operators back on Earth. On December 18, 2018, the European Space Agency (ESA) announced the testing of software for new Mars rovers that’ll help make their future exploration more autonomous – “smarter” and more capable of making their own decisions, such as deciding where to go and how to get there – i.e. self-driving.

Three different rovers – Sherpa, Mana and Minnie – were tested at five locations at the Ibn Battuta Test Centre in Morocco, near Erfoud on the northern edge of the Sahara Desert, in December 2018. With more than 40 engineers involved, this was the end of the first phase of the Strategic Research Cluster on space robotics technologies, a scheme funded by the European Union’s Horizon 2020 programme.

As explained by Gianfranco Visentin, head of ESA’s Automation and Robotics section:

This is important for the future, when there will be many more rovers going to Mars and they’ll be moving hundreds of meters [yards] per day. There won’t be schools of analysts to scrutinize every image – intelligent rover systems will be needed to detect what is interesting and send it back to Earth. 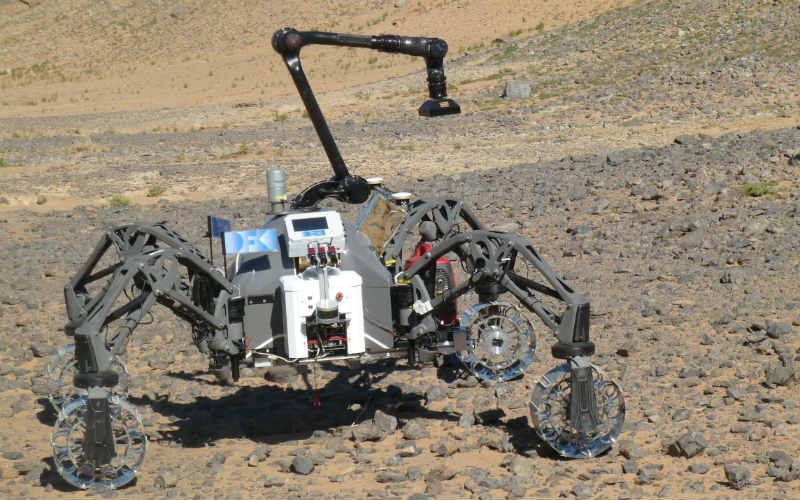 Another view of the U.K.’s test rover Sherpa. Image via Crown copyright. 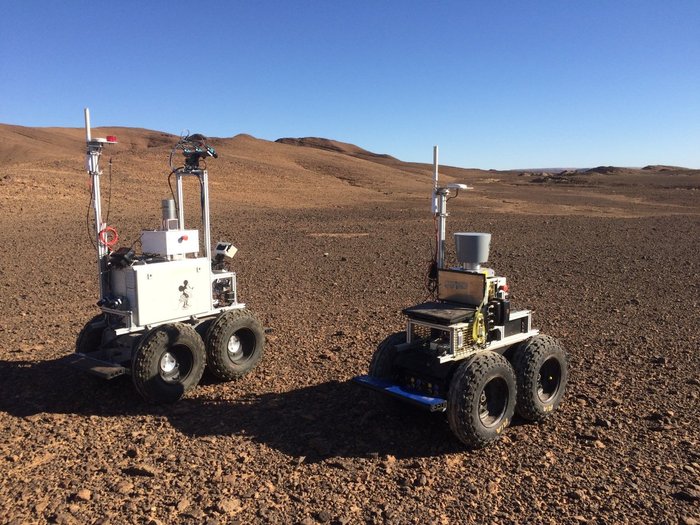 The Mana and Minnie rovers, during the field test in Morocco in December 2018. Image via ESA.

The research cluster is coordinated by the PERASPERA Ad Astra (Latin for “to the stars through hardships”) project, which is a partnership of Italy’s ASI space agency, France’s CNES space agency, the DLR German Aerospace Center, Spain’s CDTI technology agency and the U.K. Space Agency, UKSA, coordinated by ESA.

The wind-blown desert environment in Morocco was selected by the EU’s Europlanet Research Infrastructure as a good match for Mars, with its red, rocky and dusty terrain. The location has also been used by Hollywood and Chinese documentary makers. The Ibn Battuta Test Centre is named after the 14th century Islamic explorer of the same name.

A variety of new technologies were tested on the rovers, including data fusion systems, a plug-and-play sensor suite and an open-source operating system for robotic control. More specifically, according to a U.K. Government press release:

The ERGO Autonomy framework: The autonomy framework lets the rover make decisions by itself without the need for human intervention. These decisions could be about the path a rover needs to take to get to its destination. It also means the rover can make decisions about managing its resources, for example shutting down certain functions to conserve power. It will also give the rover the ability to investigate things it deems to be interesting, things which human operators might miss.

The INFUSE Data Fusion: Data fusion is about the fusing together of data from different sensors and sources in order to create useful information such as maps, which the rover can then use to navigate successfully across the difficult Martian landscape. The data will be provided by different types of camera, sensors, trackers and torches to give the rover a full understanding of the Martian world around it.

The I3DS Plug And Play Sensor Suite: The rover needs various sensors to enable it to see, perceive and understand the Martian world. Using a ‘plug-and-play’ approach means that sensors can be installed and removed easily according to the mission requirements. The Sensor suite also has a unique, built-in computer called an ICU (Integration Control Unit) that processes the signals from the sensors into information before passing that information to the Data Fusion system.

The ESROCOS Operating System: Robots need operating systems to function, just like your computer, tablet, phone or laptop at home. The operating system provides the low-level software and libraries required by the robot to undertake basic functions. It also provides the language and framework with which the other software (such as the ERGO Autonomy Framework and the INFUSE Data Fusion) must adhere in order to create a coherent and integrated system. In other words, this is the core software that provides the rules which bind all the other systems and software together.

What this kind of field test gives you is the proof of the pudding that your design is working well, even in some of the most challenging environments we can imagine.

Lab testing of the hardware we design doesn’t take account of the variability nature brings, from the light of the sky to the shape of the landscape, the texture and colours of the sand and rock. Operating outdoors in this way proves that our systems work in much more complex and elaborate settings than can ever be simulated.

To give an example during this field test, the very smoothness and homogeneity of some of the big sand dunes proved difficult for computer vision algorithms to navigate, because they are based on identifying features based on difference, so they started to behave in unexpected ways we haven’t seen before.

Our excellent results also included some good successes: the SherpaTT rover managed a 1.3-km [.8 mile] journey on an entirely autonomous basis, while its autonomous science element triggered a scientific acquisition on its own, unprompted: it spotted some strange shaped stones then asked the main planner to move into a better position to take more images.

This is important for the future, when there will be many more rovers going to Mars and they’ll be moving hundreds of meters [yards] per day. There won’t be schools of analysts to scrutinize every image – intelligent rover systems will be needed to detect what is interesting and send it back to Earth. 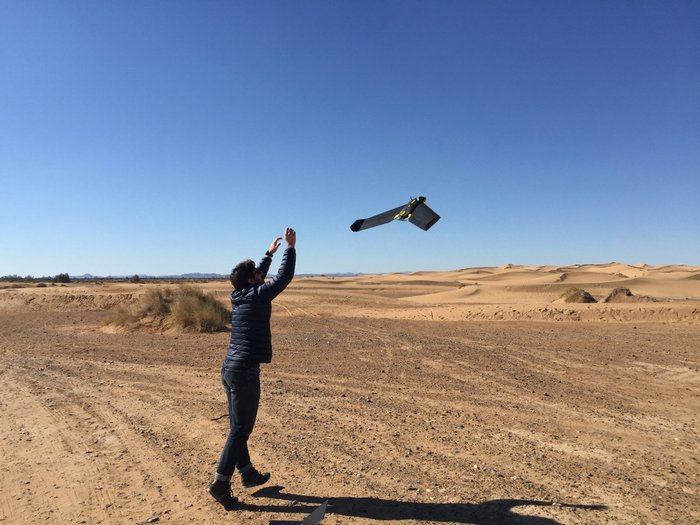 A drone being used to map the surrounding terrain where the rovers were being tested. Image via ESA, 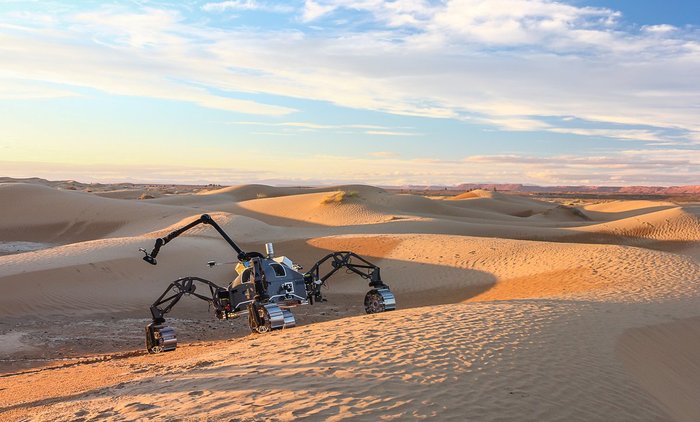 The U.K.’s Sherpa rover during the field test in Morocco in December 2018. Image via ESA.

Before the testing began, ESA also flew a drone to map the location, producing digital elevation models down to a resolution of 4 cm (1.6 inches). This kind of “ground truthing” was needed to compare data from the rovers with observed reality.

Current rovers are limited to driving a few dozen meters (yards) per day, but with the new software, future rovers could travel up to a kilometer (.6 miles) per day, a big improvement which would let rovers investigate a greater number of scientifically interesting locations during their missions.

Various companies and universities in the U.K. also participated in the testing, including Airbus Defence & Space, Thales Alenia Space, Scisys, King’s College London, the University of Strathclyde and GMV-UK. 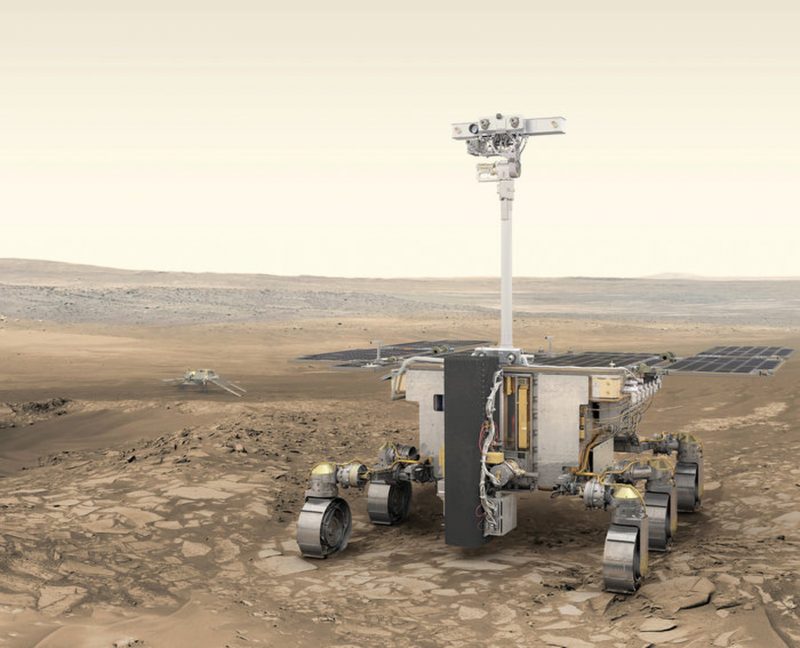 Illustration of the upcoming ExoMars rover, scheduled to launch in 2020. New rovers like this will be able to use more advanced software to become “self-driving.” Image via ESA/ATG medialab.

More advanced self-driving technology will be essential for future Mars rovers, so they can navigate the terrain without needing to be so dependent on human engineers uploading commands to them from Earth. NASA’s Curiosity rover does have a certain amount of autonomous capability, but it will need to be improved as new rovers land in potentially even more challenging terrain, including the upcoming Mars 2020 rover (NASA) and ExoMars rover (ESA).