JADES will go deeper than the Hubble Deep Fields

Astronomers announced this month that a new deep-field survey called JADES will be carried out with the James Webb Space Telescope, Hubble’s much-anticipated successor. The Webb is due to launch later this year. 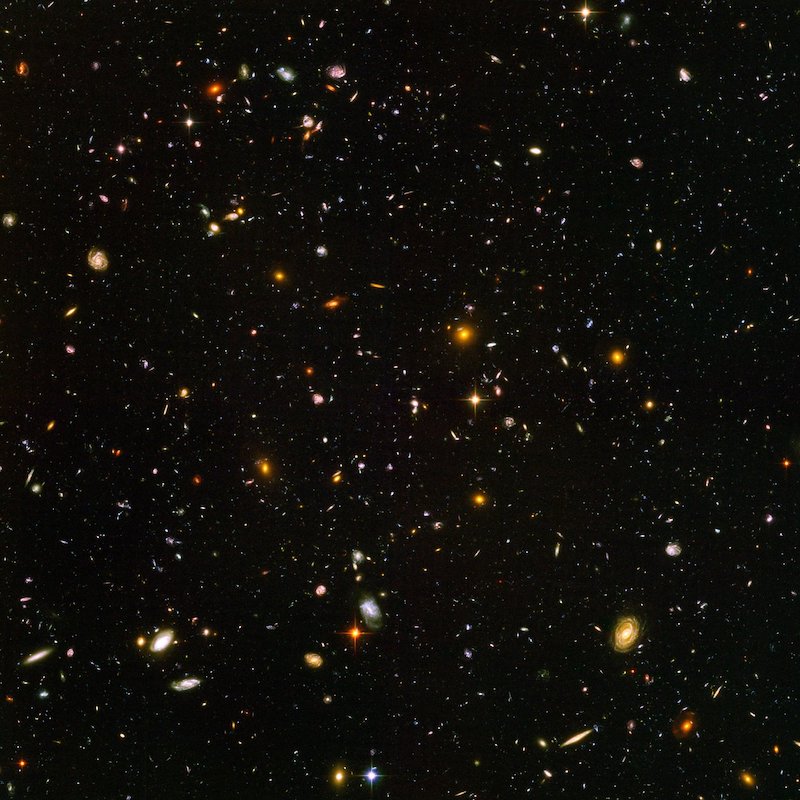 The Hubble Ultra Deep Field (in its eXtreme version) is the deepest view of the universe yet obtained … and will be, until JADES takes over. It stretches approximately 13 billion light-years and includes approximately 10,000 galaxies. It took 11.3 days for the Hubble Space Telescope to collect these ancient photons. Try downloading the largest version and zoom in on different sections. We’re seeing these galaxies as they were billions of years ago. How might they look today? Image via NASA/ ESA/ S. Beckwith (STSci)/ HUDF team.

Astronomers announced a new deeper-than-ever sky survey this month (January 15, 2021), to be conducted with the James Webb Space Telescope, the Hubble telescope’s successor, scheduled for launch in October of this year. The new survey is abbreviated JADES, which is short for James Webb Space Telescope Advanced Deep Extragalactic Survey. The survey will be like the Hubble Deep Fields, but deeper still. Its main goal is to see far away in space – and thus far back into the very young universe – and image it just at the end of the so-called Cosmic Dark Ages, that is, at the time when gas in the universe went from being opaque to transparent. This is also the time when the very first stars were forming – very large, massive and bright stars – in a veritable firestorm of star birth when the young universe was less than 5% of its current age.

The Webb telescope will be located near the second Lagrange point – a relatively stable region of space, gravitationally speaking, known as L2 – some 930,000 miles (1.5 million km) from Earth. To conduct the new survey, the Webb telescope will be staring at a small point of space for nearly 800 hours (approximately 33 days) to be able to see fainter objects than those ever seen before and thus to find the first generation of galaxies. Astronomers want to know, among other things, how fast did these galaxies form, and how fast did their stars form? They also want to look for the very first supermassive black holes, which are thought to lie at the hearts of nearly all large galaxies, including our Milky Way.

The long-anticipated launch of the James Webb Space Telescope has been postponed a number of times for a variety of reasons, most recently because of effects of the Covid-19 pandemic. It is the formal successor to the Hubble Space Telescope, but is equipped with instrumentation able to image further into the infrared part of the electromagnetic spectrum than Hubble could.

This capability also makes it a worthy successor to the infrared Spitzer Space Telescope which recently went into retirement.

What makes the infrared part of the spectrum so important for surveys like JADES? If you look really deep, you will also look back in time, and the farther back in time you look, the more redshifted the galaxies are (the farther away they are, the faster they move away from us, and the more their light has been shifted towards the red part of the spectrum). This means that the light we want to observe, originally in the optical (visible) part of the electromagnetic spectrum, might not even show much in the optical part anymore. Instead, it’s been shifted to longer wavelengths, into the infrared regime.

In other words, the use of infrared cameras is necessary to be able to see the light from the first generation of galaxies. Daniel Eisenstein, a professor of astronomy at Harvard University, said:

Galaxies, we think, begin building up in the first billion years after the Big Bang, and sort of reach adolescence at 1 to 2 billion years. We’re trying to investigate those early periods. We must do this with an infrared-optimized telescope because the expansion of the universe causes light to increase in wavelength as it traverses the vast distance to reach us. So even though the stars are emitting light primarily in optical and ultraviolet wavelengths, that light is shifted quite relentlessly out into the infrared. Only Webb can get to the depth and sensitivity that’s needed to study these early galaxies.

In fact, the James Webb Space Telescope was built specifically for this purpose. Up to now, infrared images are much less resolved – less clear – than optical images, because of their longer wavelength. With its much larger collecting area, the Webb will be able to image, in infrared, at the same resolution – detail – that Hubble could obtain in the optical part of the spectrum.

Get ready for a whole new set of mind-blowing images of the universe, this time in the infrared, from Webb! 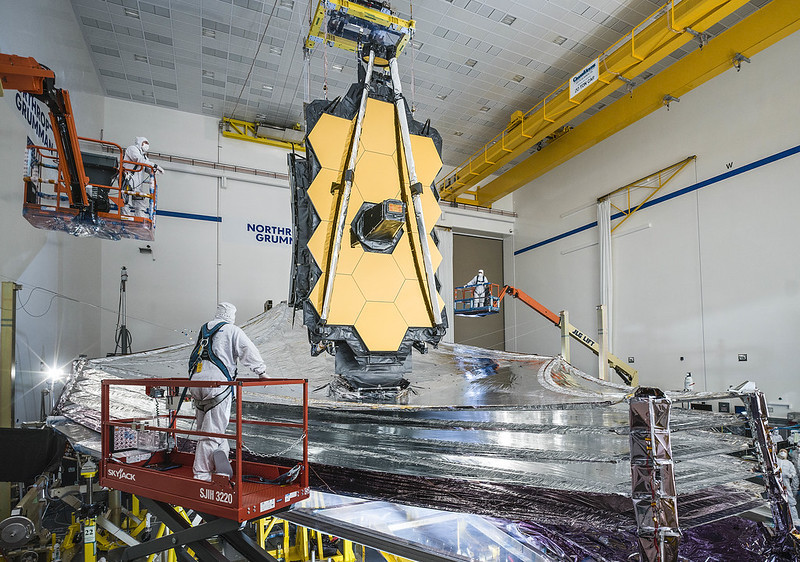 After having successfully deployed its solar panels – precisely as it’s supposed to do once it’s in space – the Webb telescope is shown here ready for the final tests on December 17, 2020, at NASA’s Goddard Space Flight Center. Then it will be packed up and transported to French Guyana, to be launched on October 31, 2021, via an Ariane V rocket. Image via NASA/ Chris Gunn.

The use of deep field surveys is a young science, for two reasons. First, astronomers didn’t have the right instrumentation before Hubble to do them. Second, it’s also because no one initially knew the result of staring into a piece of empty space for a long time. Such a long stare into the unknown would require valuable observation time, and if this long observation didn’t produce any results, it would be considered a waste.

But in 1995, Robert Williams, then the director of the Space Telescope Science Institute (STSci), which administrates the Hubble telescope, decided to use his “director’s discretionary time” to point the Hubble toward a very small and absolutely empty-looking part of the sky in the direction of the constellation Ursa Major the Great Bear. There were no stars visible from our Milky Way (or extremely few), no nearby galaxies visible in the field, and no visible gas clouds. Hubble collected photons for 10 consecutive days, and the result, the Hubble Deep Field, was a success and a paradigm changer: A patch of sky about as small as the eye of George Washington on an American quarter (25-cent coin) held out at arm’s length, showed a 10 billion-light-years-long tunnel back in time with a plethora of galaxies – around 3,000 of them – at different evolutionary stages along the way. The field of observational cosmology was born.

This was done again in 1998 with the Hubble telescope pointed to the southern sky (Hubble Deep Field South), and the result was the same. Thus we learned that the universe is uniform over large scales.

Next was the installation of a new, powerful camera on Hubble (the Advanced Camera for Surveys) in 2002. The incredible Hubble Ultra Deep Field was acquired in 2004, in a similarly small patch of sky near the constellation Orion, about 1/10 of a full moon diameter (2.4 x 3.4 arc minutes, in contrast to the original Hubble Deep Fields north and south, which were 2.6 x 2.6 arc minutes). And so our reach was extended even deeper into space, and even further back in time, showing light from 10 thousand galaxies along a 13-billion-light-years-long tunnel of space. If you’ll remember that the universe is about 13.77 billion years old, you’ll see this is getting us really close to the beginning!

The Hubble Ultra Deep Field was the most sensitive astronomical image ever made at wavelengths of visible (optical) light until 2012, when an even more refined version was released, called the Hubble eXtreme Deep Field, which reached even farther: 13.2 billion years back in time.

The JADES survey will be observed in two batches, one on the northern sky and one on the southern in two famous fields called GOODS North and South (abbreviated from Great Observatories Origins Deep Survey).

Marcia Rieke, a professor of astronomy at the University of Arizona who co-leads the JADES Team with Pierre Ferruit of the European Space Agency (ESA), explained:

We chose these fields because they have such a great wealth of supporting information. They’ve been studied at many other wavelengths, so they were the logical ones to do. 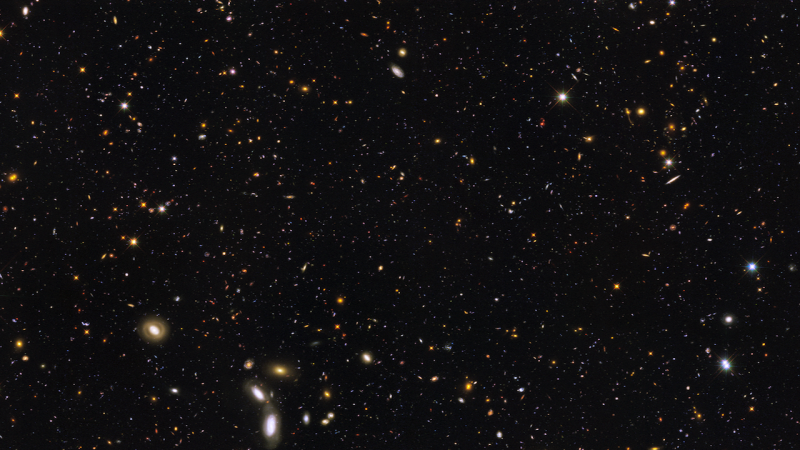 View larger. | Look closely. Every single speck of light in this image is a distant galaxy (except for the very few ones with spikes which are foreground stars). This telescopic field of view is part of the GOODS South field. It’s one of the directions in space that’ll be observed in JADES, a new survey that aims to study the very first galaxies to appear in the infancy of the universe. Image via NASA/ Hubble Space Telescope/ James Webb Space Telescope site.

The GOODS fields have been observed with several of the most famous telescopes, covering a great wavelength range from infrared through optical to X-ray. They are not fully as deep (the observations don’t reach as far back) as the Ultra Deep Field, but cover a larger area of the sky (4-5 times larger) and are the most data-rich areas of the sky in terms of depth combined with wavelength coverage. By the way, the first deep field, HDF-N, is located in the GOODS north image, and the Ultra deep field/eXtreme (don’t you love these names?) is located in the GOODS south field.

There are a large number of ambitious science goals for the JADES program pertaining to the composition of the first galaxies, including the first generation of supermassive black holes. How these came about at such an early time is a mystery. As well, the transition of gas from neutral and opaque to transparent and ionized, something astronomers call the epoch of reionization, is not well understood. JADES team member Andrew Bunker, professor of astrophysics at the University of Oxford in the United Kingdom, who is also part of the ESA team behind the Webb telescope, said:

This transition is a fundamental phase change in the nature of the universe. We want to understand what caused it. It could be that it’s the light from very early galaxies and the first burst of star formation … It is kind of one of the Holy Grails, to find the so-called Population III stars that formed from the hydrogen and helium of the Big Bang.

People have been trying to do this for many decades and results have been inconclusive so far.

But, hopefully, not for much longer!

Bottom line: JADES is an ambitious new deep sky survey to be observed with the James Webb Space Telescope, once launched. It will reach further back in time and space than any survey before, to study the very first generation of galaxies after the universe transitioned from opaque to transparent.