Peering toward the Cosmic Dark Ages

During the Cosmic Dark Ages, our universe matured from a primordial soup of neutral gas to the star-filled cosmos we see today. A new study probes this mysterious time.

View larger. | Milestones in the history of the universe (not to scale). Gas was in a neutral state from about 300,000 years after the Big Bang until light from the first generation of stars and galaxies began to ionize it, that is, strip atoms in the gas of their electrons. A new study examines the universe at 800 million years (yellow box) to investigate when and how this transformation occurred. Image via NAOJ/ NOAO.

Starlight is the lingua franca of our universe; it’s the language astronomers must learn to speak if they want to understand our place in space and time. But starlight hasn’t always been a feature of the universe. In Big Bang cosmology, shortly after the blazingly bright Big Bang itself, there came a time when the universe was utterly dark. This period, before the first stars were born, and is thought to have lasted several hundred million years in our 13.8-billion-year-old universe. Astronomers call it the Cosmic Dark Ages. Last week (July 11, 2017), the National Optical Astronomy Observatory (NOAO) said astronomers took another step forward in probing the early universe with the discovery of 23 small star-forming galaxies – called Lyman alpha emitting galaxies, or LAEs – found when the universe was only 800 million years old. Finding these galaxies helps them pinpoint when the Cosmic Dark Ages ended, and the first stars and galaxies formed. NOAO said:

The results suggest that the earliest galaxies, which illuminated and ionized the universe, formed [even earlier than 800 million years].

What are the Cosmic Dark Ages? Here’s a good description from the Kavli Institute for Particle Astrophysics and Cosmology, suggesting that, only a few hundred thousand years after the Big Bang, the universe:

… began to enter the cosmic ‘dark ages,’ so named because the luminous stars and galaxies we see today had yet to form. Most of the matter in the cosmos at this stage was dark matter with the scant remaining ordinary matter comprised largely of neutral hydrogen and helium.

Over the next few hundred million years, the universe entered a crucial turning point in its evolution, known as the Epoch of Reionization. During this period, the predominant dark matter began to collapse into halo-like structures through its own gravitational attraction. Ordinary matter was also pulled into these halos, eventually forming the first stars and galaxies, which, in turn, released large amounts of ultraviolet light. That light was energetic enough to strip the electrons out of the surrounding neutral matter, a process known as cosmic reionization.

That’s a good description of what might have happened to end the Cosmic Dark Ages. Astronomers doing studies like this one are trying to gather as much observational evidence as they can. They picture the end of the Cosmic Dark Ages as occurring sometime in the interval between 300 million years and 1 billion years after the Big Bang. Thus they want to observe galaxies as close as possible to the end of this period, but, as NOAO said in its recent statement, those observations remain “a challenge:”

The intergalactic gas … strongly absorbs and scatters the ultraviolet light emitted by the galaxies, making them difficult to detect. 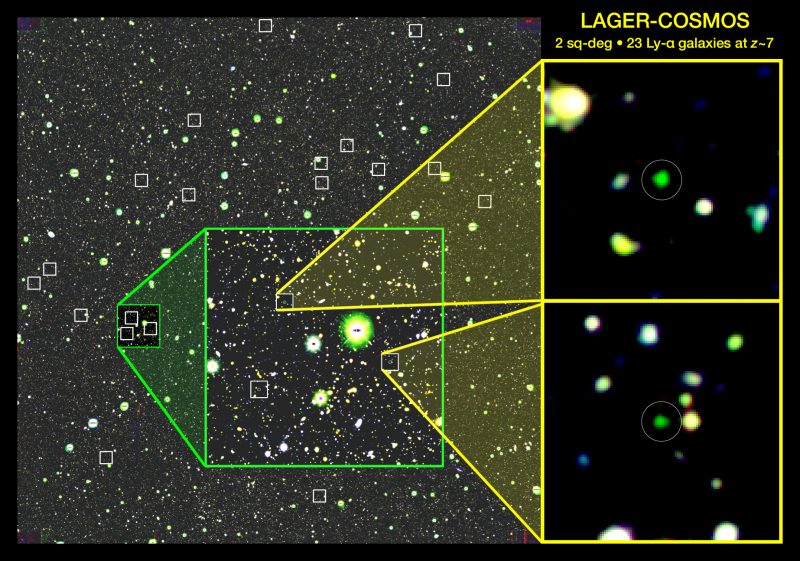 View larger. | False-color image of a 2-square-degree region of the LAGER survey field. The small white boxes indicate the positions of the 23 LAEs discovered in the survey. The detailed insets (yellow) show two of the brightest LAEs; they are 0.5 arcminutes on a side, and the white circles are 5 arcseconds in diameter. Image via Zhen-Ya Zheng (SHAO) & Junxian Wang (USTC)/ NOAO.

One way of probing this period in the early universe is to look for the Lyman alpha emitting galaxies, or LAEs. NOAO said:

To home in on when the transformation occurred, astronomers take an indirect approach. Using the demographics of small star-forming galaxies to determine when the intergalactic gas became ionized, they can infer when the ionizing sources, the first galaxies, formed.

If star-forming galaxies, which glow in the light of the hydrogen Lyman alpha line, are surrounded by neutral hydrogen gas, the Lyman alpha photons are readily scattered, much like headlights in fog, obscuring the galaxies. When the gas is ionized, the fog lifts, and the galaxies are easier to detect.

NOAO went on to describe the astronomers’ new work, which resulted in the discovery of 23 candidate LAEs, the largest sample of such galaxies discovered to date at that epoch of the universe. These small star-forming galaxies:

… were present 800 million years after the Big Bang.

The study also found that LAEs were 4 times less common at 800 million years than they were a short time later, at 1 billion years. NOAO said:

The results imply that the process of ionizing the universe began early and was still incomplete at 800 million years, with the intergalactic gas about half neutral and half ionized at that epoch.

Sangeeta Malhotra of Goddard Space Flight Center and Arizona State University, one of the co-leads of the survey, said the study shows that:

…the fog was already lifting when the universe was 5% of its current age.

Malhotra was part of an international team of astronomers from China, the U.S., and Chile, who conducted this study. They used the Dark Energy Camera on the Blanco 4-meter Telescope at the Cerro Tololo Inter-American Observatory in Chile to carry out the study – Lyman-Alpha Galaxies in the Epoch of Reionization (LAGER) – published in the peer-reviewed Astrophysical Journal Letters. 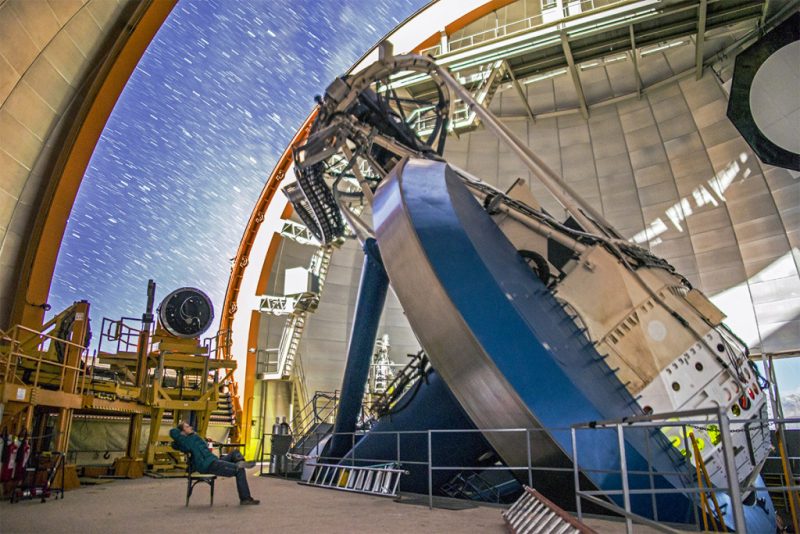 Bottom line: Astronomers discovered 23 small star-forming galaxies – called Lyman alpha emitting galaxies, or LAEs – at a time when the universe was only 800 million years old. Finding these galaxies helps them pinpoint when the Cosmic Dark Ages ended, and the first stars and galaxies formed.