A new look at the universe’s oldest light

New work agrees with older research suggesting the oldest light in the universe – from the most distant galaxy yet known – started its journey toward us 13.77 billion years ago. 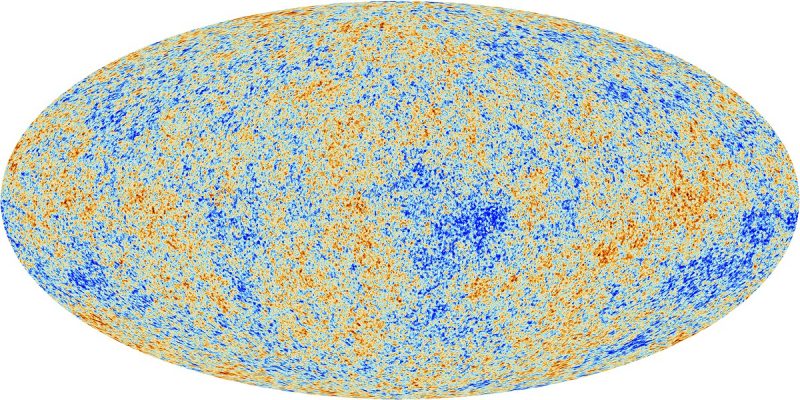 View larger. | In 2013, the Planck space telescope released the most detailed map to date of the cosmic microwave background, the relic radiation from the Big Bang. It was the mission’s first all-sky picture of the oldest light in our universe, imprinted on the sky when it was just 380,000 years old. Now a new, independent study agrees with Planck’s results. That’s good news for astronomers trying to pin down the universe’s age and rate of expansion. Image via ESA.

How old is our universe? That’s one of humanity’s oldest and most fundamental questions. Now, astronomers using the Atacama Cosmology Telescope (ACT), high in the Andes of northern Chile, have announced a new measurement of the cosmic background radiation, our universe’s oldest light, discovered in 1965 and sometimes called an echo of the Big Bang. The new measurement suggests the universe is 13.77 billion years old, give or take 40 million years. This new result agrees strongly with results from the European Space Agency’s Planck satellite, which measured the cosmic background radiation from 2009 to 2013. And it agrees with what’s called the Standard Model of particle physics, developed in the 1970s and refined in the years since then. The Standard Model encapsulates scientists’ best current understanding of how elementary particles and the fundamental forces of nature relate to one another.

The new peer-reviewed results were published in the Journal of Cosmology and Astroparticle Physics on December 30, 2020.

Agreement between independent studies gives scientists confidence their work is correct. Non-agreement does the opposite: it makes scientists think their ideas need more work. In 2019, a study had suggested the age of the universe might be hundreds of millions of years younger than Planck’s data had indicated. The new results from the Atacama Cosmology Telescope, on the other hand, agree with Planck’s results. Simone Aiola of the Flatiron Institute’s Center for Computational Astrophysics – a co-author on the new study – commented:

Now we’ve come up with an answer where Planck and ACT agree. It speaks to the fact that these difficult measurements are reliable.

The 2021 lunar calendars are here! Running low. Order yours before they’re gone! 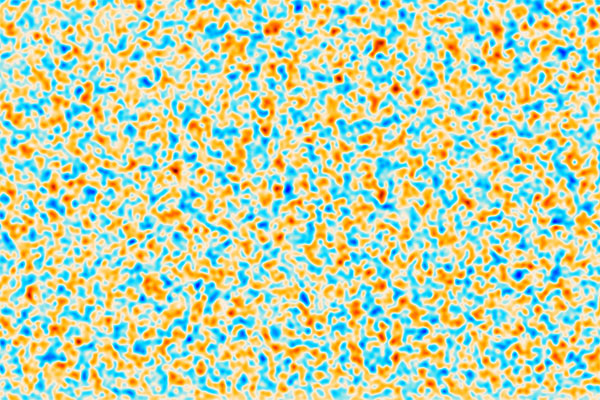 Like the Planck satellite, the Atacama Cosmology Telescope (ACT) in Chile also studies the cosmic microwave background. Here’s a portion of a new ACT image, covering a section of the sky 50 times the width of a full moon. This image represents a region of space 20 billion light-years across. Image via ACT Collaboration/ The College of Arts and Sciences.

The new measurements don’t just tell us the age of the universe. They also suggest how fast the universe is expanding.

In the early universe, there were small fluctuations of density and temperature within the hot dense sea of the Big Bang. As the universe expanded, the fluctuations expanded as well. So the scale of fluctuations we see in the cosmic microwave background today tells us how much the universe has grown. On average, the fluctuations are about a billion light-years across, and this gives us a value for the rate (the Hubble parameter) as somewhere between 67.2 and 68.1 kilometers per second per megaparsec.

I didn’t have a particular preference for any specific value; it was going to be interesting one way or another. We find an expansion rate that is right on the estimate by the Planck satellite team. This gives us more confidence in measurements of the universe’s oldest light. 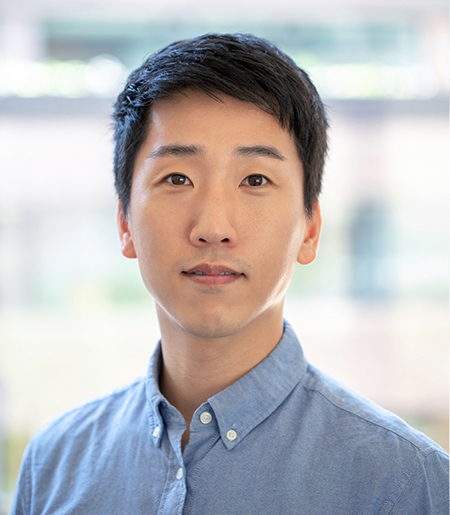 … you can use variable stars and distant supernovae to create a cosmic distance ladder that tells you the rate of expansion. The problem is, this alternative method gives a larger value for the Hubble parameter. If the supernova method is right, then the universe is younger and has expanded more quickly than the [work on the cosmic background radiation] seems to support. For a while, the hope has been that new observations and new methods of measuring cosmic expansion would solve this problem …

But, Koberlein said, the new study from ACT dashes those hopes.

According to Michael Niemack, a co-author of the new paper:

The growing tension between these distant versus local measurements of the Hubble Constant suggests that we may be on the verge of a new discovery in cosmology that could change our understanding of how the universe works. It also highlights the importance of improving our measurements of the cosmic microwave background with the Atacama Cosmology Telescope as well as the future Simons Observatory and CCAT-prime projects that we are now building. 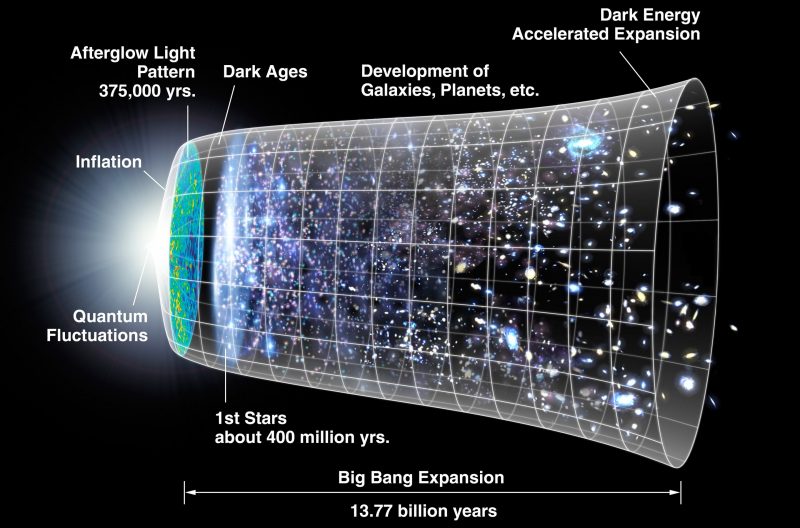 The universe is ancient, but how ancient? The current answer appears to be 13.77 billion years, give or take 40 million years. Image via NASA/ WMAP Science Team/ Wikipedia.

To calculate the universe’s age, scientists need to estimate how far light from the cosmic microwave background (CMB) – the “afterglow” of the Big Bang and the measurable record of when photons first escaped the “fog” of the early universe – has traveled to reach Earth. But that is not an easy task, so astronomers use triangulation by measuring the angle in the sky between two distant objects. With Earth as the third point of the triangle, they can then estimate the distance of both objects from Earth.

ACT is able to measure slight fluctuations in the cosmic microwave background with great precision, which helps to refine the estimates. Suzanne Staggs at Princeton University commented:

The Planck satellite measured the same light, but by measuring its polarization in higher fidelity, the new picture from the Atacama Cosmology Telescope reveals more of the oldest patterns we’ve ever seen. 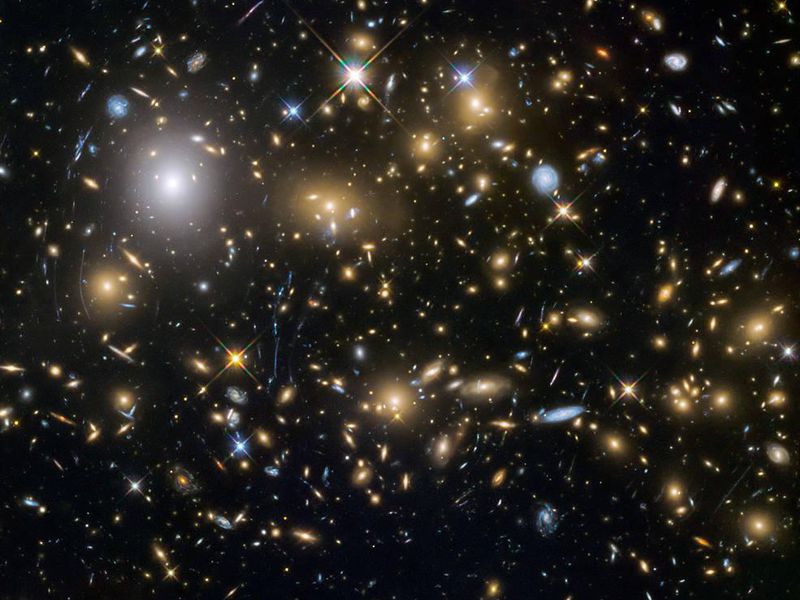 Stunning view of some of the oldest known galaxies in the universe, from the Hubble Space Telescope in 2015. Image via ESA/ NASA/ Smithsonian Magazine.

Bottom line: New observations of the oldest light in the universe indicate that the cosmos is 13.77 billion years old, and help resolve inconsistencies with other previous estimates.

Source: The Atacama Cosmology Telescope: a measurement of the Cosmic Microwave Background power spectra at 98 and 150 GHz

Via The College of Arts and Sciences