How close to finding alien life? 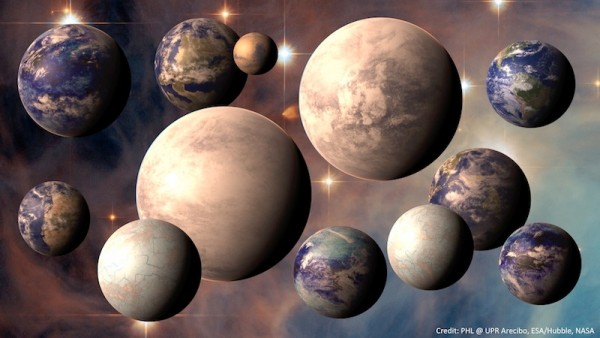 In recent years, astronomers have become increasingly certain that planets are common in our Milky Way galaxy. It’s possible that every single star we see at night has at least one planet. That would mean a hundred billion planets, at least, in our Milky Way alone. According to a recent study, it’s possible that most stars have planets in their habitable zones, an area around stars within which liquid water – and therefore life as we know it – can exist. How many of those worlds are inhabited by simple or complex life forms? And when will we on Earth discover alien life? Follow the links below to learn more:

Next steps in the search for life beyond Earth

Microbial life vs. little green men It would be awesome if, like Jodie Foster’s character in the movie Contact, scientists involved in the Search for Extraterrestrial Intelligence (SETI) suddenly realized that incoming radio signals could have originated only from an intelligent alien civilization. That discovery would be world-shaking, to say the least.

But – since we have absolutely no idea when or if that discovery might occur – ongoing discussions of life beyond Earth among most astronomers today typically focus more simply. When you hear today’s astronomers speak of finding life on other worlds, they’re most often talking about microbial life.

Microbes are single-cell organisms. They’re so tiny that millions can fit into the eye of a needle. They’re Earth’s oldest form of life, dating back more than 3.5 billion years, hundreds of millions of years before the age of dinosaurs. Could there be microbial life on other worlds in our solar system, and if so how close are we to finding it?

It seems that – according to scientists – we’re pretty close.

Earlier this month (June 16, 2015), NASA and university scientists hosted a panel in Washington D.C. to discuss the latest advancements in the search for life, with the focus on habitable planets. Another similar discussion – focused on water in the universe – was held on April 7, 2015, also in Washington D.C. At the April discussion, NASA chief scientist Ellen Stofan made a bold statement when she predicted that we would find “strong indications” of microbial life within a decade and “definite evidence” of it within 20 to 30 years.

At the same time, NASA also released an infographic outlining evidence for or indications of water on a number of worlds in our solar system. Those worlds with possible water include the dwarf planet Ceres, now being orbited by the Dawn spacecraft, a world with two mysterious bright spots that might be icy plumes. And NASA included Jupiter’s moon Europa on its new infographic. This month, NASA announced that it was moving forward with plans to send a spacecraft to study Europa, which was found recently to have salt water in the dark fractures on its surface. That salt water is presumably from the liquid ocean thought to lie below Europa’s frozen crust.

Remember, water is needed for life as we understand it, even microbial life.

Next steps in the search for life beyond Earth On April 15, 2015, astrophysicist Mario Livio, writing in Nature, said:

The most intriguing question in astronomy is, in my view, whether life exists in our galaxy beyond the solar system. Thanks especially to the Kepler space telescope, we know that the galaxy is teeming with hundreds of millions of Earth-sized planets in the ‘habitable zones’ of their host stars that allow for liquid water on a rocky surface …

A more powerful telescope will be needed to place meaningful statistical constraints on how common or rare life in the galaxy is. One with a mirror at least 12 meters across and with a resolution 25 times that of Hubble’s would be able to image a planet next to its star and detect spectrally the presence of oxygen and other biosignatures in its atmosphere.

WFIRST/AFTA [Wide Field Infrared Survey Telescope, a proposed space observatory selected by National Research Council committee as the top priority for the next decade of astronomy] should be able to detect a planet 1 billion times fainter than its star; a brightness contrast of 10 billion will be required to image an Earth analogue next to a sun-like host star …

A large sample of planets — around 50 — would have to be tested. Calculations show, for example, that if no biosignatures are detected in more than about three dozen Earth analogues, the probability of remotely detectable extrasolar life in our galactic neighborhood is less than about 10%.

Note Livio’s use of the word biosignatures. That’s an important new buzzword in the alien life search. A biosignature is any substance – any element, isotope, molecule, or phenomenon – that provides unmistakeable scientific evidence of past or present life on another world. Scientists who study extrasolar planets, aka exoplanets – planets orbiting distant stars – are increasingly optimistic that we will eventually find biosignatures on worlds far beyond our solar system, many light-years away.

In July, 2014, NASA representatives said at a public talk on extraterrestrial life that the agency would continue the search for life with the launch of at least three future space observatories. They are:

– The Transiting Exoplanet Surveying Satellite (TESS), scheduled for launch in 2017. It’ll search for exoplanets, using the same technique as the very successful Kepler Space Telescope. Thanks to Kepler, we now know 4,601 exoplanet candidates, with 1,021 planets confirmed, but only eight of Kepler’s discoveries are small planets like Earth in their stars’ habitable zones. TESS is Kepler’s successor. It will use an array of wide-field cameras in an all-sky survey, scanning nearby stars for exoplanets. With TESS data, astronomers will study masses, sizes, densities and orbits of exoplanets, including, NASA hopes, an increased number of rocky worlds in the habitable zones of their host stars. Will they look for biosignatures from these worlds? No, not with TESS. For that sort of study, you need to be able to split starlight into its component colors, or spectra, which is why some astronomers are looking to …

– The James Webb Space Telescope, scheduled for launch in 2018. Kepler and TESS (and a multitude of other searches) reveal exoplanets. But the search for biosignatures will be conducted via the powerful spectrographs of the largest ground-based telescopes and by the James Webb Telescope.

– The Wide Field Infrared Survey Telescope WFIRST/AFTA, mentioned above), hopefully to be launched early in the coming decade.

Where is everybody? As we mentioned at the top of this post, astronomers now believe that virtually every stars in our galaxy has at least one planet. It’s easy to see why we haven’t found microbial life on any of these worlds. We haven’t been to very many worlds – or returned samples from many worlds (although sometimes, as in the case of Martian meteorites, interesting samples of other worlds do sometimes come to us).

So we haven’t found microbial life yet because our technology hasn’t advanced far enough to let that happen. But it very probably will happen, and probably within the timeframe – 20 to 30 years – suggested by NASA chief scientist Ellen Stofan in April.

Intelligent extraterrestial life is a different question. Hundreds of billions of planets in our galaxy alone? Surely some have intelligent life. If so, some of those intelligent aliens must have developed interstellar travel by now; we’re discussing how to do it, after all. If we can conceive of it, perhaps some have done it.

Physicists Enrico Fermi and Michael H. Hart thought of many of those same arguments in 1950. The sun is a typical star. There are billions of planets. Assuming Earth is typical, some planets should have intelligent life and should have developed interstellar travel. They added that:

Even at the slow pace of currently envisioned interstellar travel, the galaxy can be completely colonized in a few tens of millions of years.

And, of course, our galaxy is vastly older than that, some 13 billion years old.

Whatever you personally believe about visitations by aliens, Fermi saw no convincing evidence of it. He famously asked:

That question is known as Fermi’s Paradox, and while no one knows the answer to it for certain, there are some standard answers. For example, maybe interstellar travel simply uses too much energy, and hence it too costly to undertake. Or maybe we have been – or are being – visited, and, for some reason, alien intelligences have declined to make themselves known.

As it stands now, some astronomers – like those at the SETI Institute in California – will continue searching for intelligent life.

Many other astronomers, especially young astronomers just entering the field, will likely join in the search for biosignatures among the planets in our solar system and among the thousands of exoplanets discovered so far, orbiting distance stars.

Why search for life? At the June 16, 2015 NASA panel discussion, panelist John Grunsfeld – a physicist and former astronaut and Associate Administrator for the Science Mission Directorate at NASA Headquarters in Washington, D.C. – said:

We’re trying with the science to answer some fundamental questions … where do we come from?

What’s the evolution, the path, by which the Earth was formed in such a way to allow life to form?

What’s the future of the Earth and solar system, and what’s our role in that future?

Are we alone? Is there any other life out there?

As always, there are more questions than answers, but it’s a safe assumption that – in the weeks and months and years ahead – we’re going to be hearing a lot more about this subject!

Bottom line: If you’re looking for a precise answer to the question “how close are we to finding alien life,” you can stop reading. No one knows the answer for certain. However, over the past year, the search for alien life has heated up in the scientific community. This post outlines some of the ways that scientists are thinking about, talking about and implementing the search for life beyond Earth.

Thank you! Your submission has been received!
Oops! Something went wrong while submitting the form.
END_OF_DOCUMENT_TOKEN_TO_BE_REPLACED