Most exoplanets orbiting close to their stars don’t have atmospheres. But Gliese 486b – orbiting a red dwarf star only 24 light-years away – does. It’s close enough to see well. Astronomers will be watching it! 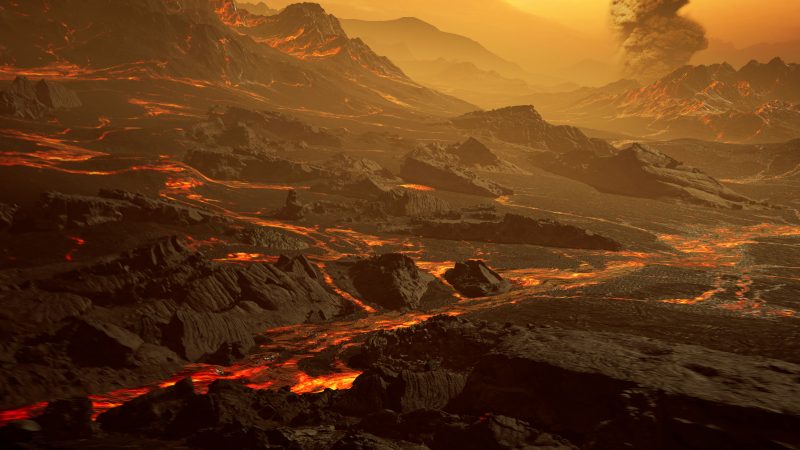 Artist’s concept of the surface of Gliese 486b, a very hot super-Earth world, only 24 light-years away. Image via RenderArea/ MPIA.

Super-Earth exoplanets are defined as being larger and more massive than Earth, but smaller and less massive than Neptune (about 17 times Earth’s mass). Some super-Earths orbit near their stars and are likely too hot for life. Others orbit farther out and so would be more temperate, in some cases potentially habitable. Hot super-Earths, if too close to their stars, are thought to be prone to losing their atmospheres. Super-Earths with atmospheres can be challenging to study, too. That’s why astronomers with the CARMENES consortium in Europe are excited today (March 4, 2021) to announce the discovery of a hot super-Earth, with an atmosphere, orbiting a nearby star!

The star is Gliese 486, a red dwarf only 24 light-years away. The exoplanet is called Gliese 486b. It does appear to retain its atmosphere, despite its close orbit around its star.

This blazing hot super-Earth – with an atmosphere – is therefore an ideal target for future telescopes and for testing different scientific models depicting rocky exoplanet atmospheres.

Astronomer Trifon Trifonov from the Max Planck Institute for Astronomy led the new research on Gliese 486b. The work was published in the peer-reviewed journal Science on March 4. 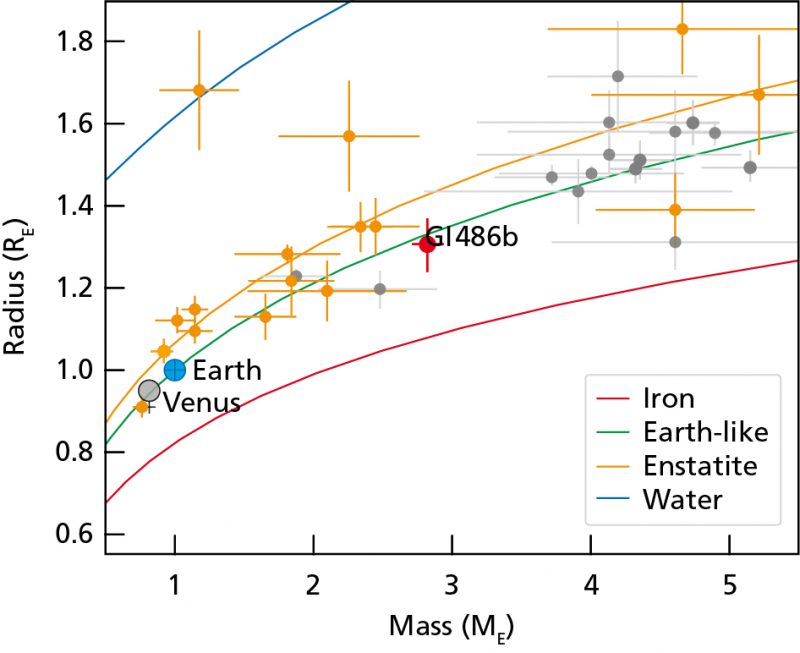 Comparison of estimated interior composition of selected exoplanets to that of Earth and Venus. The red marker represents Gliese 486b, the orange symbols depict planets around cool stars like Gliese 486 and gray dots show planets hosted by hotter stars. Image via Trifonov et al./ MPIA.

Trifonov said in a statement:

The proximity of this exoplanet is exciting because it will be possible to study it in more detail with powerful telescopes such as the upcoming James Webb Space Telescope and the future Extremely Large Telescope.

Gliese 486, a red dwarf star, is only 24 light-years away – right next door in cosmic terms – and the planet, Gliese 486b, has a mass 2.8 times that of Earth and is 30% larger. Using the mass and radius, the researchers were able to calculate the mean density of the planet and found that its composition is likely similar to Earth and Venus, including a metallic core.

The planet orbits very close to its star, completing an orbit in only about 1.5 days. It is also tidally locked to the star, meaning that the same side of the planet always faces the star, much like how the same side of our moon always faces Earth. Like other red dwarfs, Gliese 486 is smaller and cooler than our sun. But Gliese 486b is still a hot hellhole, with an estimated surface temperature of 430 degrees Celsius (806 degrees Fahrenheit), due to the irradiation coming from the star.

Generally, this makes Gliese 486b more like scorching Venus than Earth, but there is one big difference: the planet’s atmosphere is probably much thinner and tenuous at best. Venus’ atmosphere on the other hand is dense with crushing pressure at the surface, like being deep in the ocean on Earth.

Depiction of the tight orbit of a super-Earth type planet around a red dwarf star. If the viewing angle is right, the planet will transit in front of its star as seen from Earth. Image via MPIA.

According to the researchers, it is fortunate that Gliese 486b happens to be ideal for follow-up observations. As co-author José A. Caballero of the Centro de Astrobiología in Spain described it:

The discovery of Gliese 486b was a stroke of luck. A hundred degrees hotter and the planet’s entire surface would be lava. Its atmosphere would consist of vaporized rocks. On the other hand, if Gliese 486b were a hundred degrees colder, it would have been unsuitable for follow-up observations.

So what else can astronomers learn about Gliese 486b?

The researchers want to catch the planet while it transits in front of its star as seen from Earth. This would enable them to use spectroscopy, which reveals various compounds according to how they absorb light at specific wavelengths. In this way, they could find out more about the composition of the planet and its thin atmosphere. 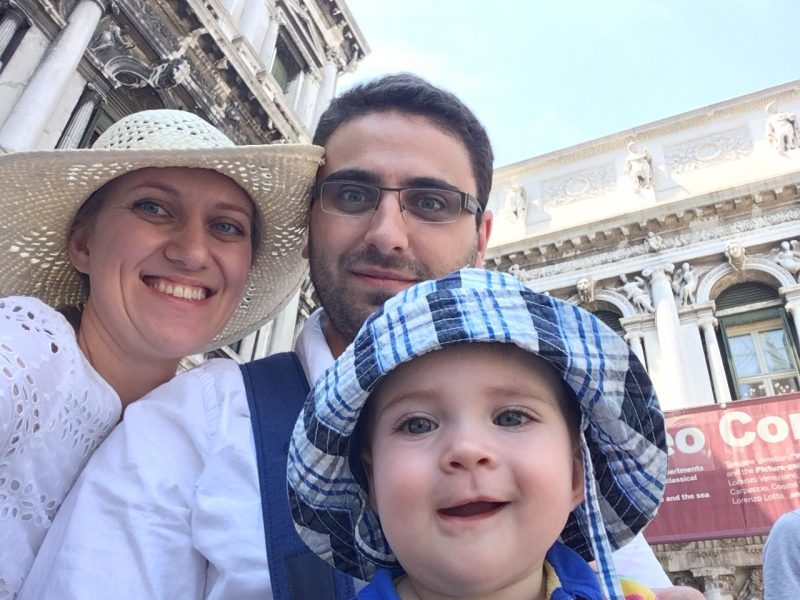 Trifon Trifonov from the Max Planck Institute for Astronomy, who led the CARMENES consortium research team. Image via Trifon Trifonov.

We can hardly wait for the new telescopes to become available. The results will help us to understand how well rocky planets can hold their atmospheres, what they are made of and how they influence the energy distribution on the planets.

Knowing how many super-Earths retain their atmospheres when close to their stars could even provide vital clues about the potential habitability of these worlds overall. Of course, the more temperate ones, a bit farther out from their stars, will be of greater interest when it comes to searching for evidence of possible life. There is actually a lot of debate among scientists as to whether super-Earths can be habitable at all, and there is still a lot that we don’t know about them. We already know that the atmospheres of some super-Earths contain water vapor, and scientists think it is possible that some of them could have long-lasting oceans.

They are not, however, simply larger versions of Earth, they are unique worlds on their own. But with the upcoming new generation of telescopes, astronomers say, we’ll be able to learn more about what they are really like and how they formed. 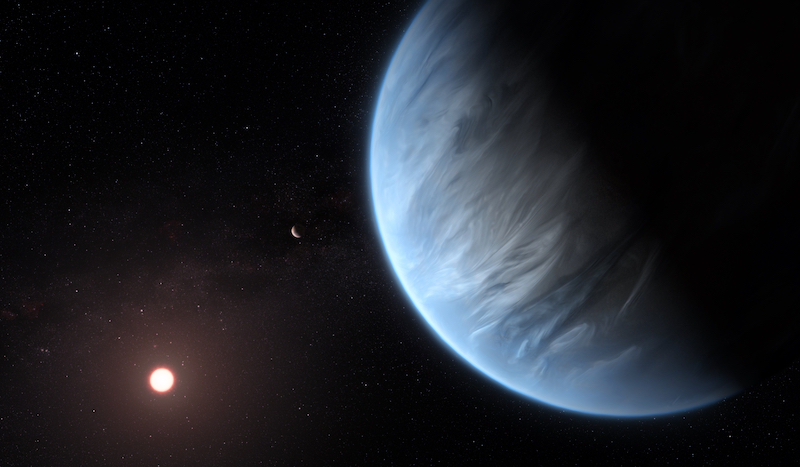 Artist’s concept of super-Earth K2-18b, a distant world now known to have both water vapor in its atmosphere and relatively moderate temperatures. Can it – does it – support life? Image via ESA/ Hubble/ M. Kornmesser.

Source: A nearby transiting rocky exoplanet that is suitable for atmospheric investigation