The planets are 2-10 times as massive as Earth. They orbit near their stars and receive some 650 times the radiation that Earth receives from our sun. 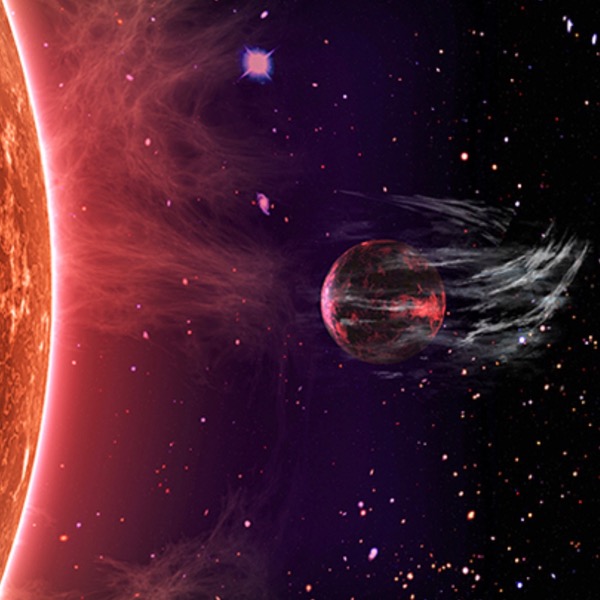 View larger. | Artist’s concept of a planet’s atmosphere being stripped by its star. Illustration by Peter Devine via Yale University.

Yale University announced today (April 11, 2016) that a global team of astronomers has discovered super-Earths – planets outside our solar system with masses roughly 2-10 times that of Earth – whose atmospheres are being stripped away by their own stars. They say their discovery constitutes a new category of planets beyond our solar system. Their work is published in the journal Nature Communications, and Mia Lundkvist of Aarhus University in Denmark is lead author. Yale astronomy professor Sarbani Basu, a study co-author, commented:

It’s as though [these planets] are standing very close to a blow-dryer set at maximum speed and heat.

All that is loose gets blown away. In this case, it is the planet’s atmosphere.

Data from NASA’s Kepler mission, which has found more than all of all known exoplanets, or planets orbiting distance suns, was used by these astronomers to study the super-Earths. They focused on super-Earths receiving:

… more than 650 times the radiation from their host star that Earth receives from the sun.

This violent stripping occurs in planets that are made up of a rocky core with a gaseous outer layer. Due to the planets’ proximity to the star, the heat that they suffer means that their envelopes have been blown away by the intense radiation.

These astronomers used asteroseismology — also known as stellar seismology, a study of the internal structure of stars through the interpretation of the rate at which they pulsate — to characterize the host stars and their planets. This, in turn, let them characterize the sizes of the extra-solar planets precisely, they said. Base added:

Our results have important implications for understanding how stellar systems, like our own solar system, and their planets evolve over time and the crucial role that the host star plays in the evolution of a planetary system.

Bottom line: An international team of astronomers has discovered what they say is a new category of exoplanets: super-Earths whose atmospheres are being stripped away by their parent stars.