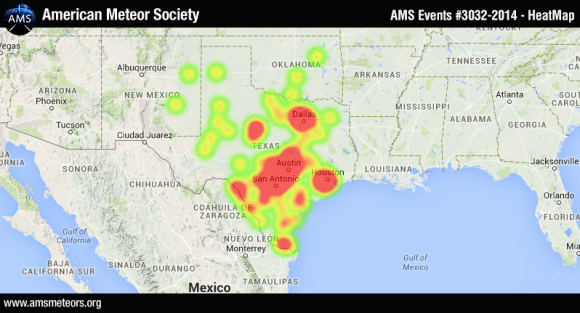 The American Meteor Society (AMS) says that it received over 200 reports of a bright meteor – or fireball – over San Antonio, Texas on Saturday night, November 8, 2014 at approximately 8:45 CST (2:45 UTC on November 9). Local news outlets in San Antonio likewise reported hundreds of calls. Witnesses reported an extremely bright green light that reportedly “rivaled the brightness of the sun,” AMS said. Some caught the meteor on dashboard cameras, like YouTube user shadeth, who posted a video online.

Did you see it? Report it here to the American Meteor Society

There were even reports of ground-shaking! But these are unconfirmed, and no meteorite candidate has been reported.

Bright fireballs like the one observed Saturday night over San Antonio are not unusual. In fact, given the Earth as a whole, they are extremely common. It’s just that Earth is big, so it’s rare to see one over your own locale.

These sightings are typically caused by random chunks of space debris that enter Earth’s atmosphere and vaporize due to friction with the air. Occasionally, a meteor does make it all the same to the ground, and then its name changes to meteorite.

Could Saturday night’s bright fireball have been part of a meteor shower? Yes, possibly. There are three relatively minor meteor showers going on in early November: the South Taurids, the North Taurids and the Andronmedids. To know if the meteor was associated with one of those regular showers, you would have to know the meteor’s path across the star background. If it radiated from one of the known radiant points of one of these known showers, then, yes, it was probably a shower meteor.

I have not heard, however, if anyone tracked this meteor’s path across the stars so precisely.

Bottom line: Hundreds of sky watchers in Texas reported a bright meteor or fireball Saturday night, November 8, 2014. It was said to be greenish in color and to rival the brightness of the sun!

Thank you! Your submission has been received!
Oops! Something went wrong while submitting the form.
END_OF_DOCUMENT_TOKEN_TO_BE_REPLACED