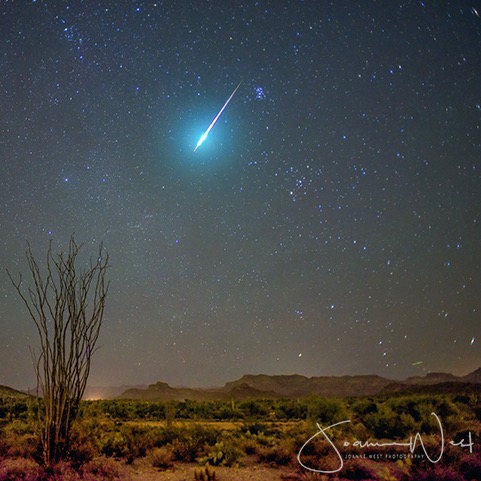 Photo top of post: Taurid fireball on the evening of October 21, 2017, from Joanne West at Gold Canyon, Arizona. Read more about this photo.

This year probably won’t be like 2015, which was an incredible year for seeing Taurid fireballs (2015 photos here). This long-lasting North Taurid shower – along with its sister shower, the South Taurids – runs throughout late October and November. The nominal peak of the North Taurid meteor shower is on the night of November 11-12, 2020, but don’t let that stop you from watching throughout the month. Generally, this shower is at its strongest for several hours, centered around midnight local time (that’s midnight, the time on your clock, no matter where you are on the globe).

Check out this dust trail! Gregory Thompson in Ulster County, New York, captured this meteor on November 4, 2018, as well as the dust trail it left behind. He wrote: “The camera captured the dust trail for more than 18 minutes. This .gif image shows about 10 minutes of frames!”

In 2015, we received many reports and photos of bright and amazing Taurid fireballs. The Taurids may have a seven-year cycle for such amazing activity. We’re still waiting on the final word on the 2020 Taurids.

Still, keep watching. Meteor showers – by their nature – are hard to predict. They are, after all, the result of streams of debris in space. We don’t have those debris streams precisely mapped. So you never know for sure what is in store, when you watch a meteor shower. Some tips for watching below … 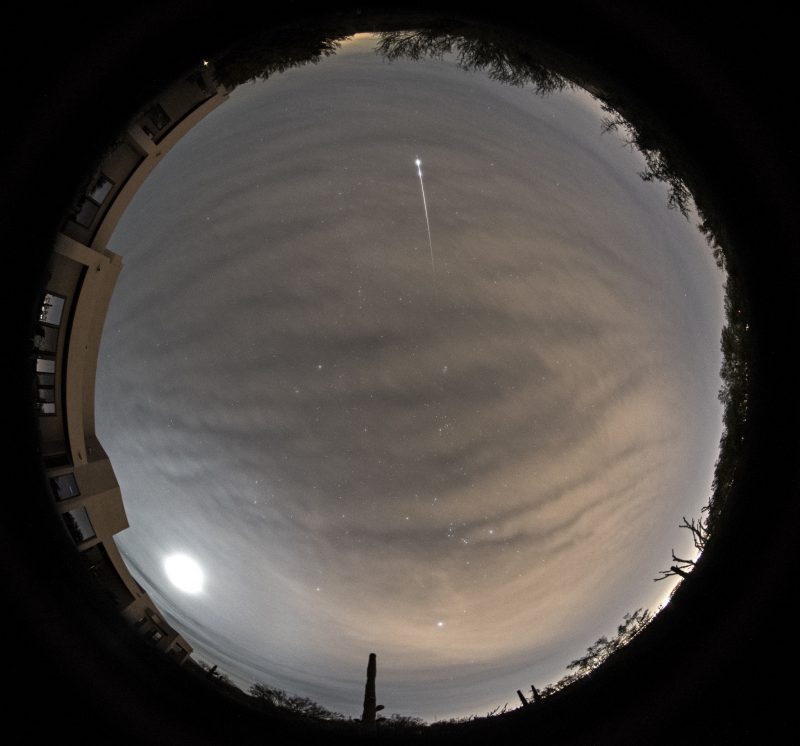 Note for Southern Hemisphere stargazers: Everything we’re saying here applies to you, too!

Luckily, in 2020, the waning crescent moon won’t seriously intrude on the North Taurid shower on the expected peak night of November 11-12, 2020. In fact, it’ll be a good way to cap off a night of meteor watching by watching the morning crescent moon with Venus and Mercury in the eastern predawn/dawn sky. 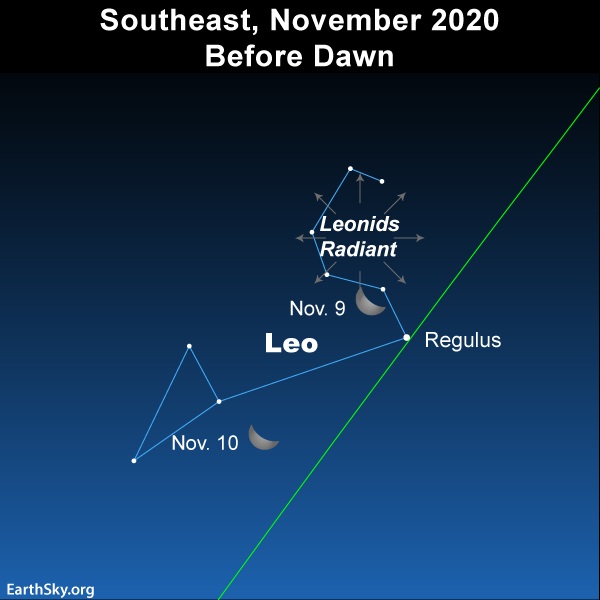 If you’re watching the Taurids before dawn November 9 and 10, 2020, you’ll see the moon in front of the constellation Leo the Lion. Incidentally, Leo is the radiant for the upcoming Leonid meteor shower, which is expected to peak on the night of November 16-17, 2020. Better yet, there will be no moon to ruin the show. Read more. 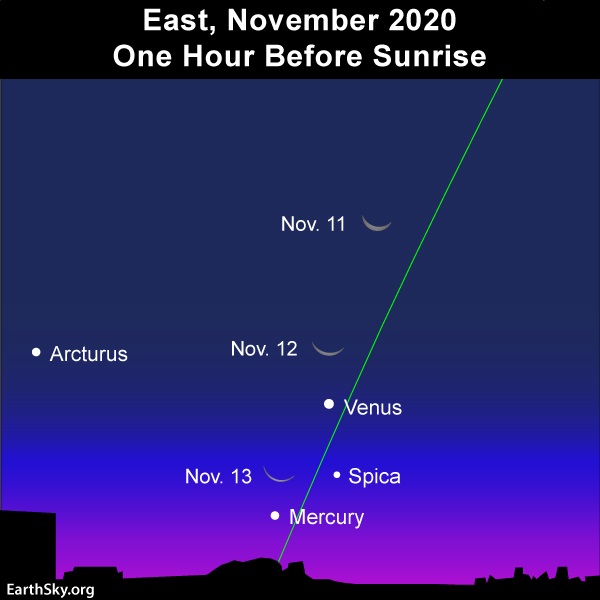 1. Keep your expectations real. The South Taurids peak has already passed. And there’s no sharp peak to North Taurids, so don’t expect a shower in the sense of a shower of rain. You might not see any more than five North Taurids an hour, but you still might see a few South Taurid meteors in the mix. It’s not necessarily the number of Taurids that makes this shower amazing. Instead …

2. Watch for fireballs! Both the North and South Taurids are known for having a high percentage of fireballs – extra-bright meteors. That’s what you want to watch for this year. To increase your chances of seeing a really bright meteor …

3. Watch in the hours around midnight. That’s when the radiant point, in the constellation Taurus the Bull, will be well above your horizon. That’s true for both the Northern and Southern Hemisphere, by the way.

4. If you do need to watch in the evening hours, be aware that the meteors tend to be few and far between at that time. However, if you’re lucky, you might catch an earthgrazer meteor, which is a sloow-moving and loong-lasting meteor that travels horizontally across the sky. Worth a try! Plus, the waning crescent moon should’t too greatly disrupt this shower!

5. The North Taurid meteors’ radiant point is in the constellation Taurus the Bull. In fact, the radiant for this shower is not far from the famous Pleiades star cluster, also known as the Seven Sisters, in Taurus. You don’t need to identify this constellation to see the meteors. They will appear all over the sky. Still, it helps to know when the radiant rises. Taurus rises over the northeast horizon around 7 to 8 p.m. at mid-northern latitudes. At temperate latitudes in the Southern Hemisphere, Taurus rises a few hours later.

6. Yes, you can watch the shower no matter where you are on Earth. The constellation Taurus climbs upward as evening deepens into late night, and soars highest for the night shortly after midnight. The higher that Taurus appears in your sky, the more meteors that you’re likely to see. Because Taurus is a northern constellation, it climbs higher in the Northern Hemisphere sky than for our cousins in the Southern Hemisphere.

7. Find a dark place to observe. You don’t need to find the constellation Taurus to enjoy the North Taurid meteor shower. But it does help to find a dark, open sky. Be sure to take along a reclining lawn chair for comfort.

8. Clouded out? Missed it? Nah! This shower will be active for another month or so. However, the waning moon will make moonlight less of a factor in the week ahead. 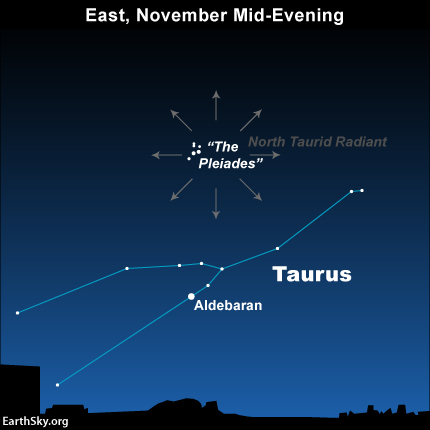 The radiant point of November’s North Taurid meteor shower is in the constellation Taurus the Bull, near the Pleiades star cluster, also known as the Seven Sisters.

A close-up of the Pleiades star cluster. See the little dipper-shaped cluster on the chart above? That’s the Pleiades. It’s easy to see in the night sky. Photo by Dave Dehetre on Flickr.

Bottom line: Meteor forecasters are calling for the night of November 11-12, 2020, to be the peak night of the North Taurid meteor shower. This shower has been known to produce fireballs – very bright meteors. Watch for them.