Scientists measure the space-time warp in the gravity of a binary star and find the mass of a fast-spinning pulsar — just before the pulsar disappears. 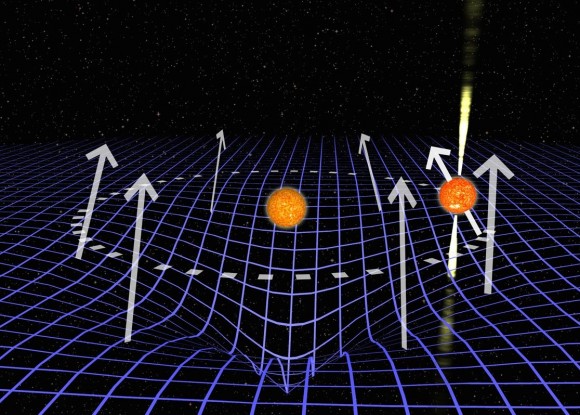 A model of the binary pulsar system PSR J1906+0746,. The arrow through the orange sphere on the right represents the precession axis of the pulsar; that is, the pulsar is now known to wobble in the curved space-time of this system. Image via Astron.

Astrophysicists say they pinned down some of the characteristics of a distant and exotic inhabitant of our universe, a binary millisecond pulsar, shortly before it disappeared from our view. They call this system a relativistic binary pulsar, because the masses and densities of the two objects are so extreme that they’re best understood in light of Einstein’s relativity theory. The system is called PSR J1906+0746, or J1906 for short. It consists of a neutron star orbiting another dense object (possibly another neutron star, or a white dwarf), in a little under 4 hours. Before it disappeared, the neutron star was seen to spin rapidly and emit a lighthouse-like beam of radio waves every 144 milliseconds.

An international team of researchers studied the system and was able to describe the masses of the two objects, as well as measure the space-time warp in the gravity of the system. They say that space-time warp ultimately caused the disappearance of the pulsar from our earthly vantage point. These astronomers published their study today (January 8, 2015) in the Astrophysical Journal, and they are presenting their results today at the 225th meeting of the American Astronomical Society, in Seattle.

Not sure about pulsars? Check out the video below, from NASA.

Joeri van Leeuwen, an astrophysicist at The Netherlands Institute for Radio Astronomy ASTRON, and University of Amsterdam, The Netherlands, led the study. He said in a press release:

Our result is important because weighing stars while they freely float through space is exceedingly difficult. That is a problem because such mass measurements are required for precisely understanding gravity, the force that is intimately linked to the behavior of space and time on all scales in our universe.

Astronomers have measured the masses of only a handful of other double neutron stars. This group says J1906 – which was was discovered in 2004 with the Arecibo Observatory – is by far the youngest measured so far. The supernova explosion that formed it took place only 100,000 years ago. According to these scientists, that means:

… the binary is in a remarkably pristine and unevolved state. Normal pulsars live to be around 10 million years old; they can then be recycled by binary companion to live for yet another 1 billion years. If the companion to J1906 is a neutron star, it is likely recycled, although it appears to not be shining our way.

After its 2004 discovery, the team monitored J1906 almost daily with the five largest radio telescopes on Earth: the Arecibo Telescope (USA), the Green Bank Telescope (USA), Nançay Telescope (France), the Lovell Telescope (UK) and the Westerbork Synthesis Radio Telescope (The Netherlands). Over 5 years, that campaign kept exact score of all rotations of the pulsar — an astounding one billion in total. co-author Ingrid Stairs, professor of physics and astronomy at The University of British Columbia, Canada, said:

By precisely tracking the motion of the pulsar, we were able to measure the gravitational interaction between the two highly compact stars with extreme accuracy.

These two stars each weigh more than the sun, but are still over 100 times closer together than the Earth is to the sun. The resulting extreme gravity causes many remarkable effects.

One of these is geodetic precession of the spin axis of the pulsar. When you start a spinning top, it doesn’t only rotate — it also wobbles. According to general relativity, neutron stars, too, should start to wobble as they move through the gravitational well (the highly curved space-time) of a massive, nearby companion star.

The team kept track of the geodetic precession in J1906 and noticed a change of 2.2 degrees in the orientation of the pulsar spin axis. Van Leeuwen said:

Through the effects of the immense mutual gravitational pull, the spin axis of the pulsar has now wobbled so much that the beams no longer hit Earth.

The pulsar is now all but invisible to even the largest telescopes on Earth. This is the first time such a young pulsar has disappeared through precession. Fortunately this cosmic spinning top is expected to wobble back into view .. but it might take as long as 160 years. 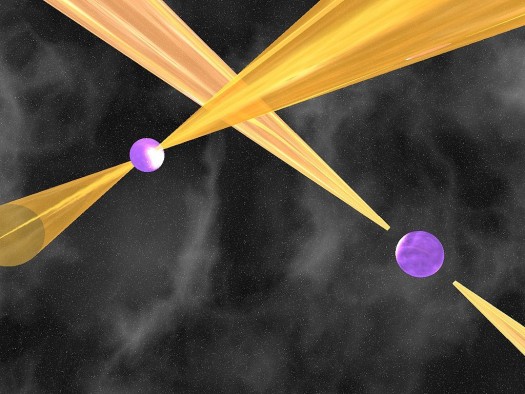 A binary pulsar might be two pulsars orbiting each other, as shown in this artist’s illustration. Or it might be a pulsar orbiting a white dwarf. Image via Michael Kramer (Jodrell Bank Observatory, University of Manchester) and Wikimedia Commons.

Bottom line: Astronomers identified a binary pulsar system, which they called PSR J1906+0746, in 2004. It consists of a rapidly spinning neutron star, a pulsar, and possibly another neutron star or white dwarf. For five years afterwards, they tracked the system and were able to pin down the masses of the two orbiting bodies, plus recognize relativistic features of the system’s mutual orbit. They say the pulsar’s spin axis was precessing (wobbling) so quickly that its lighthouse-like beam of radio waves, previously seen every 144 milliseconds, has now disappeared as seen from Earth.