Among other discoveries, a team of astronomers found that the core of our Milky Way galaxy drives a wind at 2 million miles per hour. 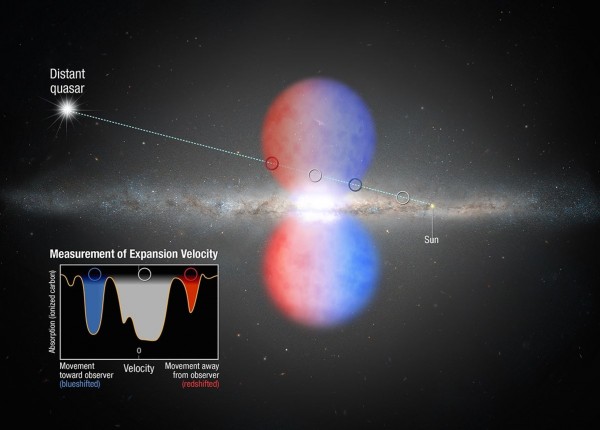 View larger. | The Fermi Bubbles, discovered in 2010, extend above and below the plane of our Milky Way galaxy. They shine in gamma rays, x-rays and radio waves but are invisible to the human eye. The graphic shows how the Hubble Space Telescope was used to probe the light from a distant quasar … to analyze the Fermi Bubbles. The quasar’s light passed through one of the bubbles. Imprinted on that light is information about the outflow’s speed, composition, and eventually mass. Image via HubbleSite.

There’s news this week (January 5, 2014) from the ongoing meeting of astronomers in Seattle about the wonderful Fermi Bubbles, a vast apparent shock wave feature discovered in 2010, extending above and below the plane of our Milky Way galaxy. The bubbles look like a giant number “8” at the center of our galaxy. From the beginning, astronomers assumed these huge outflow features were caused by some major disruption from our galaxy’s core. They also identified high-energy jets extending through the bubbles in 2012. Now astronomers have ingeniously used the light of a quasar to probe one of the Fermi Bubbles, greatly increasing what we know about it. They’ve learned, among other things, that a wind is blowing from our galaxy’s core, driving the material that pushes the bubbles outward, at some 2 million miles per hour (3 million kph).

If you could see them, the Fermi Bubbles would span more than half of the visible sky, from the constellation Virgo to the constellation Grus. In other words, when you look at the night sky, chances are you’re looking right at these bubbles and jets. But – since your eyes can’t detect gamma rays, x-rays or radio waves, all of which have been used to study the bubbles – you can’t see them.

But we do see similar outflow features from the cores of other galaxies. Andrew Fox of the Space Telescope Science Institute in Baltimore, Maryland, lead researcher of the new study, said:

When you look at the centers of other galaxies, the outflows appear much smaller because the galaxies are farther away. But the outflowing clouds we’re seeing are only 25,000 light-years away in our galaxy. We have a front-row seat. We can study the details of these structures. We can look at how big the bubbles are and can measure how much of the sky they are covering.

In this recent work, astronomers used the Hubble Space Telescope to measure the velocity and composition of the Fermi Bubbles. They used an instrument mounted on Hubble called the Cosmic Origins Spectrograph (COS) to probe the ultraviolet light from a distant quasar that lies behind the base of the northern bubble.

Imprinted on that light as it travels through the lobe is information about the velocity, composition, and temperature of the expanding gas inside the bubble, which, the astronomers said, “only COS can provide.”

Fox’s team determined that the gas on the near side of the bubble is moving toward Earth and the gas on the far side is traveling away. COS spectra show that the gas is rushing from the galactic center at roughly 2 million miles an hour (3 million kph). Rongmon Bordoloi of the Space Telescope Science Institute, a co-author on the science paper, said:

This is exactly the signature we knew we would get if this was a bipolar outflow. This is the closest sightline we have to the galaxy’s center where we can see the bubble being blown outward and energized. 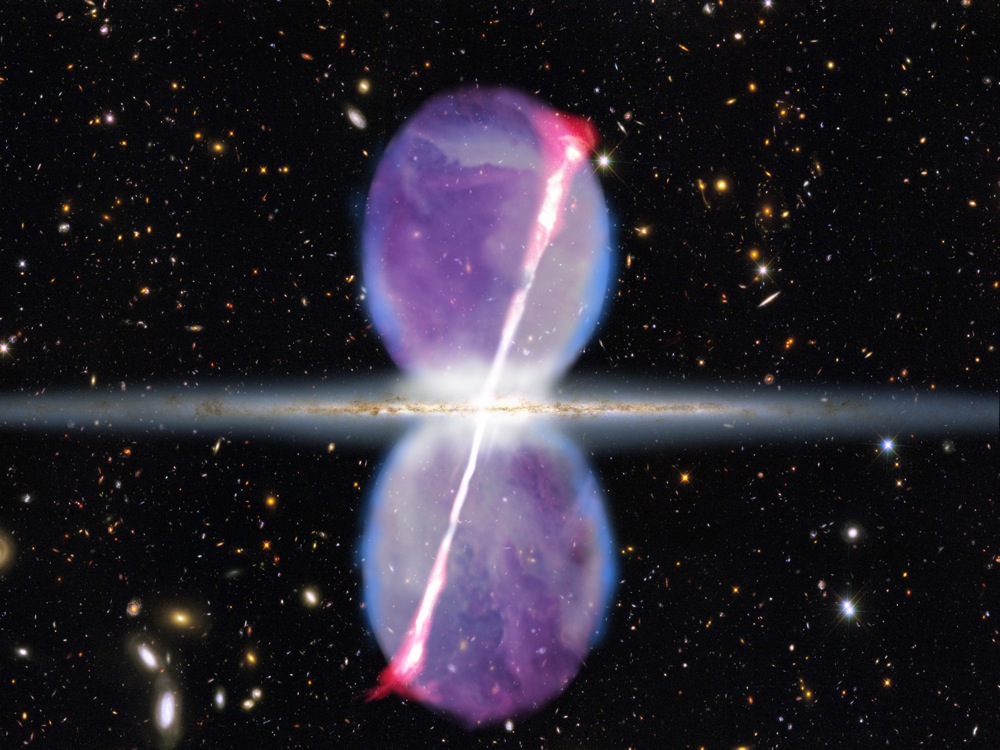 In May, 2012, astronomers announced gamma-ray jets (shown in pink) extending through the Fermi Bubbles. Read more about the 2012 discovery of the jets. Image via David A. Aguilar (CfA)

The new observations also measured, for the first time, the composition of the material being swept up in the gaseous cloud. COS detected silicon, carbon, and aluminum, indicating that the gas is enriched in the heavy elements produced inside stars and represents the fossil remnants of star formation.

COS measured the temperature of the gas at approximately 17,500 degrees Fahrenheit, which is much cooler than most of the super-hot gas in the outflow, thought to be at about 18 million degrees Fahrenheit. Fox explained:

We are seeing cooler gas, perhaps interstellar gas in our galaxy’s disk, being swept up into that hot outflow.

These astronomers say this is the first result in a survey of 20 faraway quasars whose light passes through gas inside or just outside the Fermi Bubbles — like a needle piercing a balloon.

An analysis of the full sample will yield the amount of mass being ejected. The astronomers can then compare the outflow mass with the velocities at various locations in the bubbles to determine the amount of energy needed to drive the outburst and possibly the origin of the explosive event.

Astronomers have proposed two primary theories for the possible origins for the bipolar lobes. One idea is a frenzy of star birth at the Milky Way’s center. The other is a major eruption of our Milky Way’s central supermassive black hole. In either case, the event that created the bubbles apparently took place at least 2 million years ago, at a time when our earliest human ancestors had recently mastered walking upright.

And, whatever the origin of the Fermi Bubbles, they indicate that our Milky Way’s center was much more active in the past than it is today.

Astronomers initially spotted the Fermi Bubbles using NASA’s Fermi Gamma-ray Space Telescope in 2010. The detection of high-energy gamma rays suggested early on that a violent event in the galaxy’s core aggressively launched energized gas into space. The video below describes the 2010 discovery.