A flare from our galaxy’s core 400 times brighter than usual, in September, 2013. Over a year later, a second large flare. Now scientists are trying to explain why. 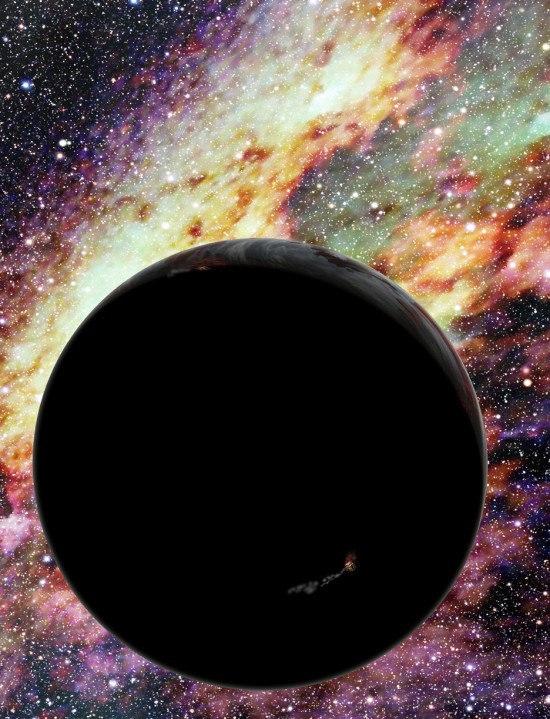 Artist’s concept of the supermassive black hole at the center of our Milky Way. Illustration via David A. Aguilar (CfA)

On September 14, 2013, the Chandra X-ray observatory caught a flare from the supermassive black hole at the center of our Milky Way galaxy. The flare was 400 times brighter than the hole’s usual output! Over a year later, the orbiting observatory caught a second large flare. Now scientists are trying to explain why, and they have two possible theories.

The first flare was the largest X-ray flare ever detected from the center of our Milky Way. This region, thought to hold a black hole some four million times more massive than our sun, is known as Sagittarius A* (pronounced Sagittarius A-star) by astronomers. The second flare from Sgr A*, in October 2014, was 200 times brighter than normal.

Astronomers have two theories about what could be causing these megaflares from Sgr A*.

The first idea is that the strong gravity around Sgr A* tore apart an asteroid in its vicinity, heating the debris to X-ray-emitting temperatures before devouring the remains. The second idea involves the strong magnetic fields around the black hole. If the magnetic field lines reconfigured themselves and reconnected, this could also create a large burst of X-rays. Such events are seen regularly on the sun and the events around Sgr A* appear to have a similar pattern in intensity levels to those.

Interestingly, researchers were looking at something else when they noticed the big X-ray flares. In 2011, astronomers had discovered a cloud of gas – with several times Earth’s mass – accelerating fast towards the Milky Way’s supermassive black hole. The cloud appeared to be undergoing spaghettification – sometimes called the noodle effect – stretching and elongating as it neared the black hole. It was thought at first the cloud – which came to be called G2 – would meet a fiery end as it passed into the Milky Way’s black hole. It did not, and now astronomers say it passed closest to the hole – but survived the passage – in northern spring or summer of 2014. Read more about how G2 survived the black hole at our Milky Way’s heart.

Astronomers estimate that G2 was 15 billion miles from the Milky Way’s central black hole, at its closest. The Chandra flare observed in September 2013 was about a hundred times closer to the black hole. So, weirdly enough, the astronomers say G2 was not related to the flare. Makes you wonder, though.

In addition to the giant flares, the G2 observing campaign with Chandra also collected more data on the magnetar located close to Sgr A*. This magnetar is undergoing a long X-ray outburst, and the Chandra data are allowing astronomers to better understand this unusual object.

This graphic shows the area around Sgr A* – the supermassive black hole at the center of our Milky Way galaxy. Low, medium, and high-energy X-rays are red, green, and blue respectively. The inset box contains an X-ray movie of the region close to Sgr A* and shows the giant flare, along with much steadier X-ray emission from a nearby magnetar – a neutron star with a strong magnetic field – to the lower left. Image via Chandra X-Ray Observatory.

Bottom line: The Chandra X-ray observatory caught a flare from our galaxy’s core 400 times brighter than usual, in September, 2013. Over a year later, it caught a second large flare. Now scientists are trying to explain why.