Astronomers found 96 new open star clusters in our Milky Way – the first time so many have been found at once. Each spans light-years and contains 10-20 stars.

An international team of astronomers has discovered 96 open star clusters hidden by dust in our Milky Way galaxy. These faint objects – clusters of stars that were born together and still moving through space as a family – were invisible to previous surveys. They were seen now by the infrared detectors of the VISTA Infrared Survey Telescope at the European Southern Observatory’s Paranal Observatory in northern Chile. Because it can see at infrared wavelengths, this telescope can peer through dust.

This is the first time so many faint and relatively small clusters have been found at once. Each one spans many light-years and contains 10-20 stars.

The team’s findings will appear in the journal Astronomy & Astrophysics. 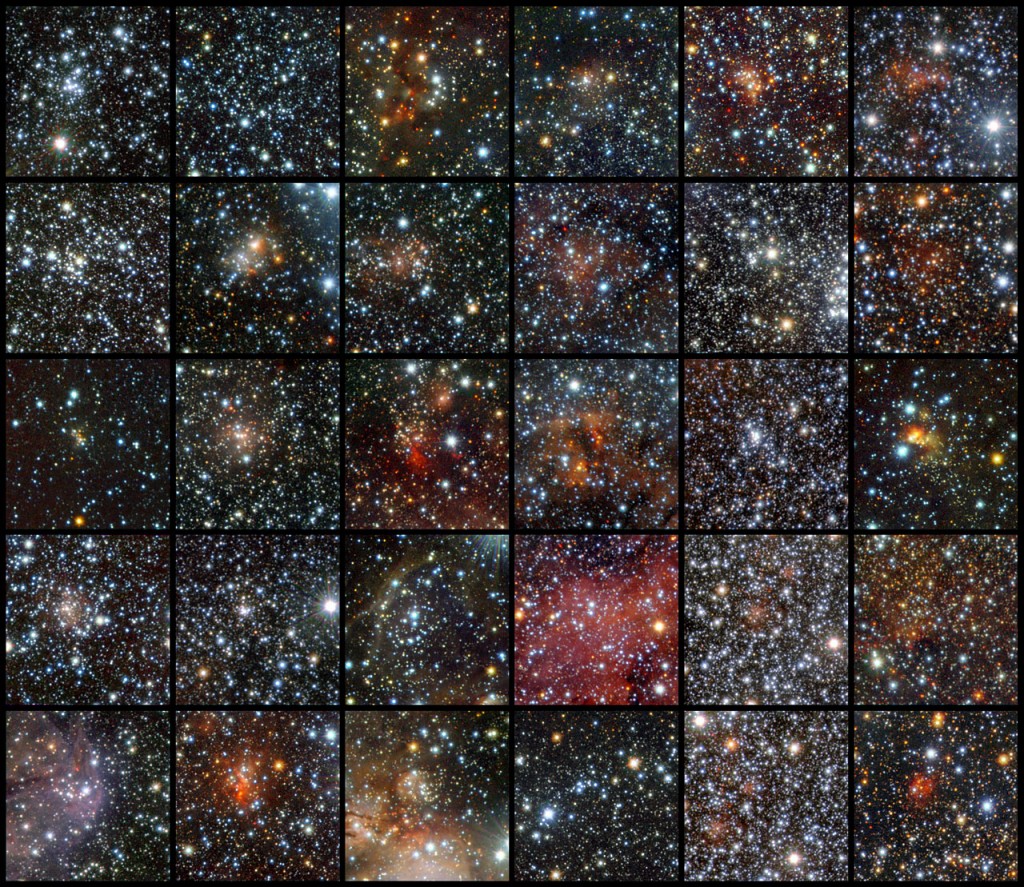 Open star clusters are dear to us, because our sun must once have been part of one, and perhaps still is. Stars with more than half the mass of our sun form in such groups – like families – of stars. Thus open star clusters are the building blocks of galaxies like our Milky Way. They are vital for the formation and evolution of galaxies such as our own.

But though a few open star clusters – such as M6 and M7 between the constellations Scorpius and Sagittarius – are common sights to amateur astronomers, these objects are by nature hidden from astronomers. That is because stars form in clouds of dust in winding spiral arms of galaxies, and thus open star clusters form in very dusty regions that diffuse and absorb most of the visible light that their emerging and young stars emit. Until now, no large number of them had been discovered at once, although astronomers estimate that tens of thousands of open star clusters must exist in our galaxy. 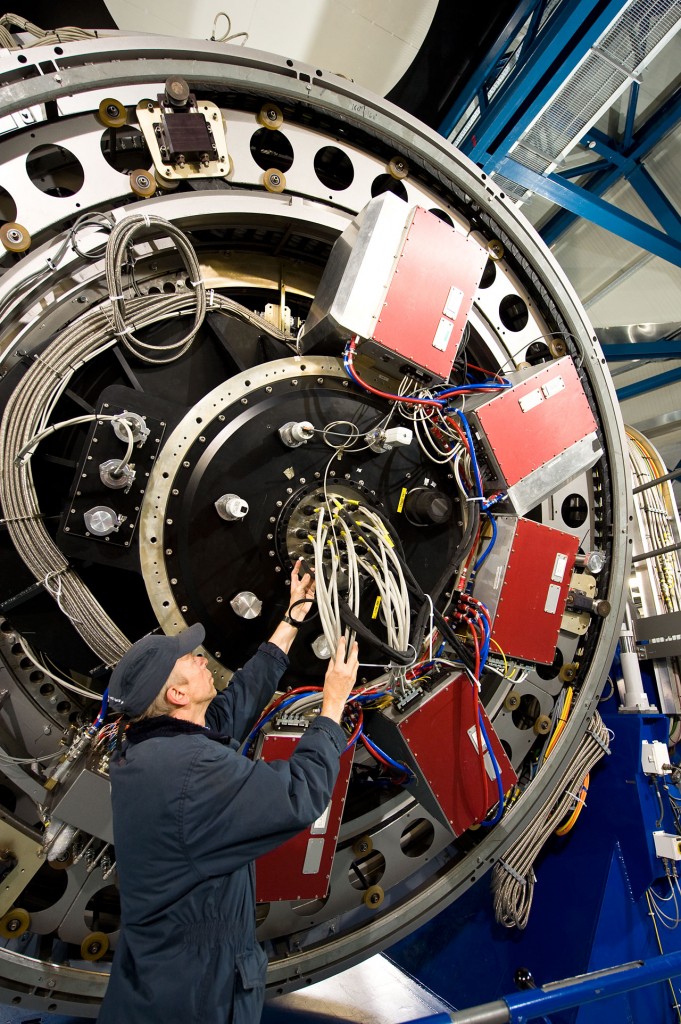 Gerhard Hüdepohl checks below the main mirror of VISTA. The powerful eye is a 3-ton camera containing 16 special detectors sensitive to infrared light. VISTA is the largest telescope in the world dedicated to surveying the sky. Image Credit: ESO

Dante Minniti, lead scientist of the survey that discovered the 96 new clusters, said:

In order to trace the youngest star cluster formation, we concentrated our search towards known star-forming areas. In regions that looked empty in previous visible-light surveys, the sensitive VISTA infrared detectors uncovered many new objects.

By using carefully tuned computer software, the team was able to remove the foreground stars appearing in front of each cluster in order to count the genuine cluster members. Afterwards, they made visual inspections of the images to measure the cluster sizes, and for the more populous clusters they made other measurements such as distance, age, and the amount of reddening of their starlight caused by interstellar dust between them and us.

We found that most of the clusters are very small and only have about 10–20 stars. Compared to typical open clusters, these are very faint and compact objects — the dust in front of these clusters makes them appear 10,000 to 100 million times fainter in visible light. It’s no wonder they were hidden.

Furthermore, these new 96 open clusters could be only the tip of the iceberg. Jura Borissova, lead author of the study, said:

We’ve just started to use more sophisticated automatic software to search for less concentrated and older clusters. I am confident that many more are coming soon. 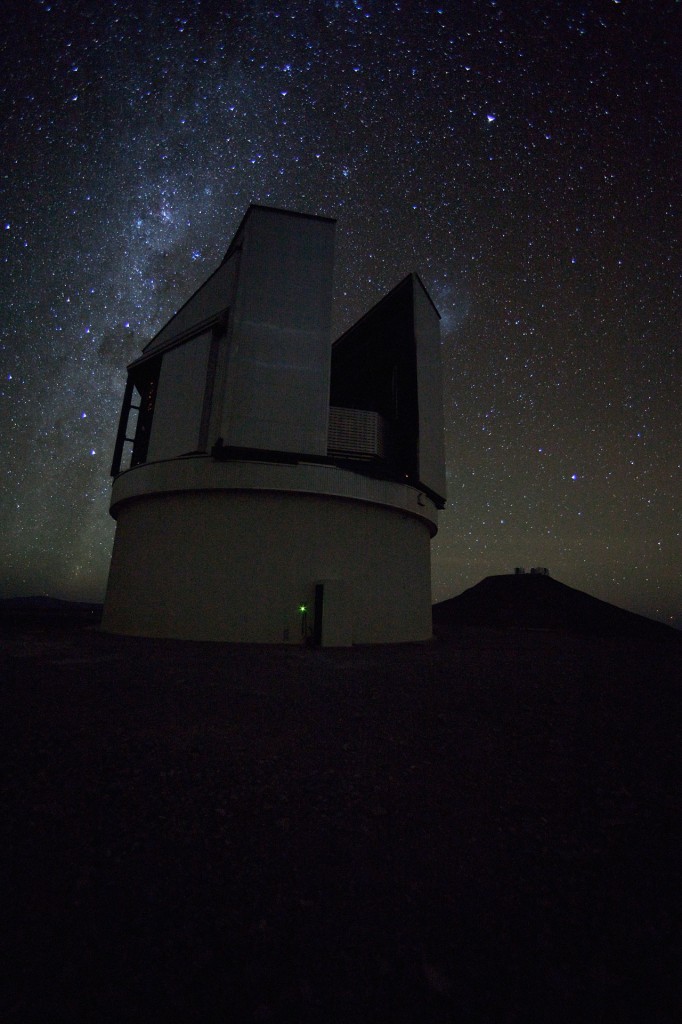 Bottom line: The VISTA infrared survey telescope at ESO’s Paranal Observatory has discovered 96 open star clusters hidden by dust in the Milky Way. Astronomers Jura Borissova, Dante Minniti, and Radostin Kurtev were members of a team who made the discovery. Their paper will appear in the journal Astronomy & Astrophysics.