This image was created by the European Southern Observatory (ESO) from data identified by Manu Mejias from Argentina, who participated in ESO’s Hidden Treasures astrophotography competition. Hot young stars in star cluster NGC 1929 are emitting intense ultraviolet light and causing gas to glow. This effect highlights the aptly named superbubble, a vast shell of material about 325 by 250 light-years across. The official name of this nebula is LHA 120-N 44, or just N 44 for short. It resides in the Large Magellanic Cloud and is visible as a faint glow through an amateur telescope. 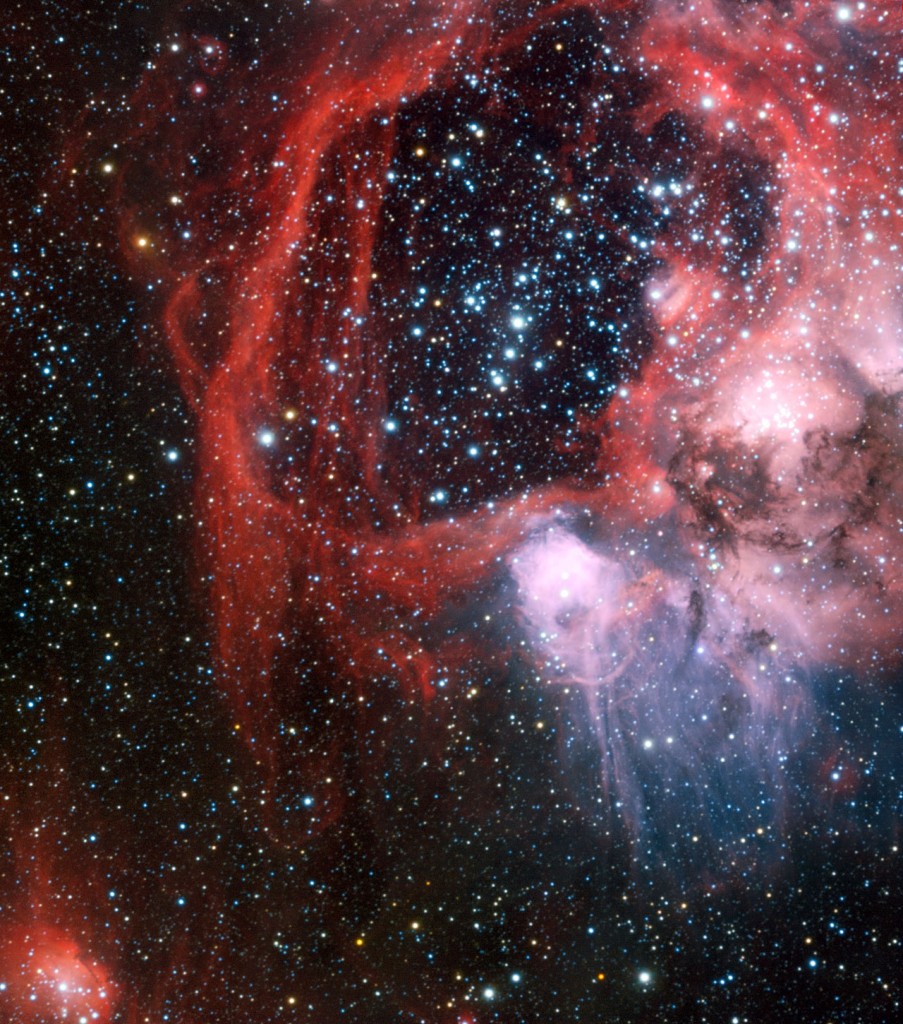 The N 44 superbubble was formed by the combination of two processes. Stellar winds – streams of charged particles from the very hot and massive stars in the central cluster – cleared out the central region. Then massive cluster stars exploded as supernovae, creating shockwaves and pushing the gas out further to form the glowing bubble.

Although the superbubble is shaped by destructive forces, new stars are forming around the edges where the gas is being compressed. Like recycling on a cosmic scale, this next generation of stars will breathe fresh life into NGC 1929. 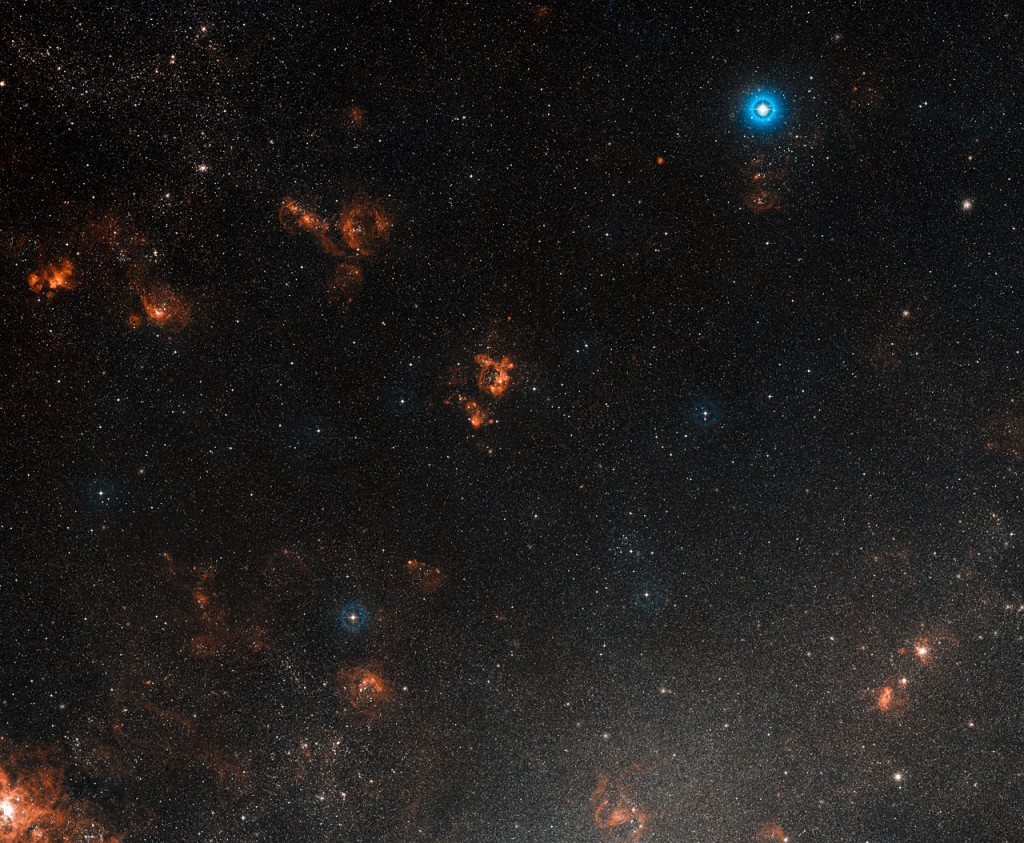 This visible-light wide-field image of the area around N 44 was created from photographs taken through red and blue filters and forming part of the Digitized Sky Survey 2. The superbubble appears close to the center. Several other star formation regions are visible in the surrounding sky. The field of view is approximately three degrees across. Image Credit: ESO and Digitized Sky Survey 2 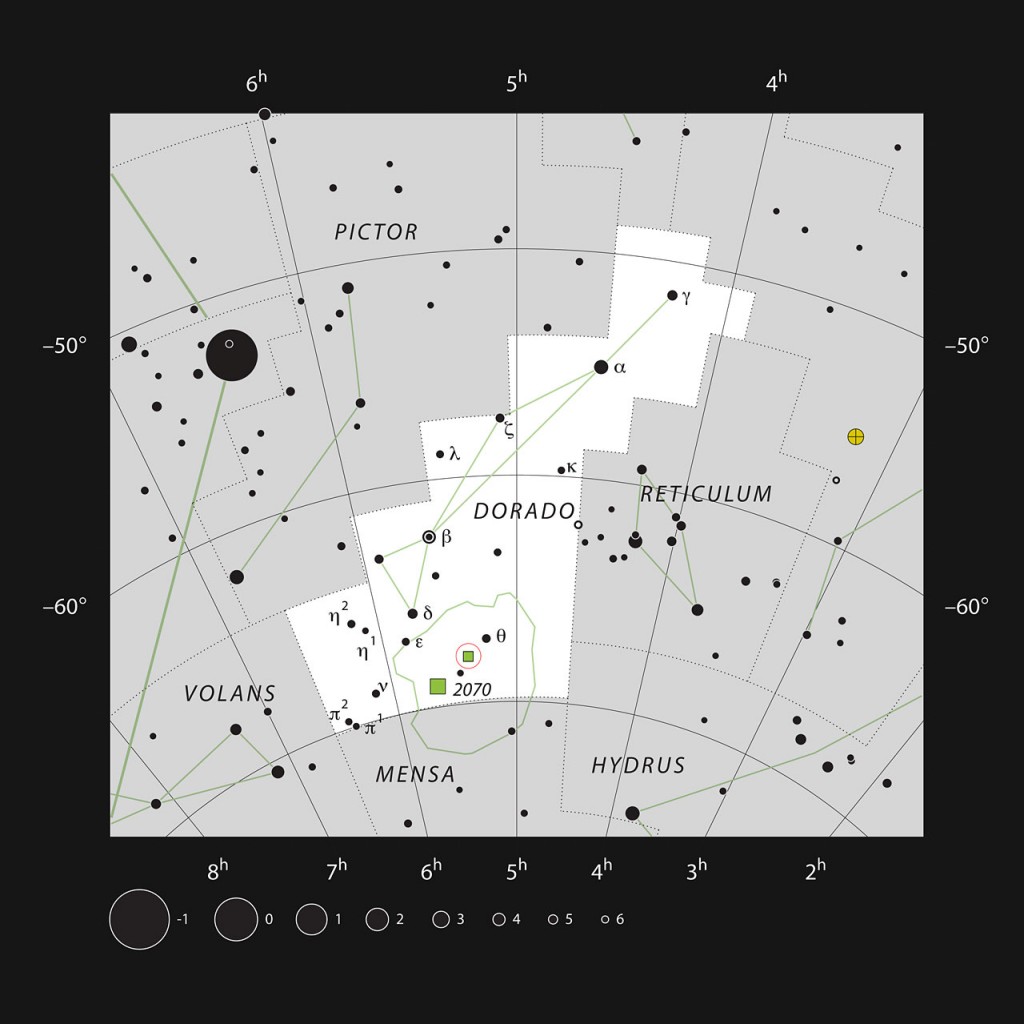 This chart shows the location of the star formation region and superbubble N 44 around the star cluster NGC 1929 within the constellation of Dorado (The Dolphin Fish). The map shows most of the stars visible to the unaided eye under good conditions. The nebula is marked as a green square within a red circle. Through a moderate-sized amateur telescope, this object appears as a faint glow. Image Credit: ESO, IAU and Sky & Telescope

Mejias searched through ESO’s archive and identified datasets that he used to compose his image of NGC 1929, which was ranked joint seventh in the Hidden Treasures competition out of almost 100 entries. His original work is shown here. The competition was organized by ESO in October-November 2010, for people who enjoy making beautiful images of the night sky using astronomical data obtained from professional telescopes.

Bottom line: ESO released this image of LHA 120–N 44 on July 20, 2011. This superbubble surrounds star cluster NGC 1929 in the Large Magellanic Cloud. Manu Mejias identified the data for this image as part of his participation in the ESO Hidden Treasures astrophotography competition.

Our Milky Way is special for its bright, nearby satellite galaxies