Messier 6 and Messier 7 are star clusters near Scorpius’ stinger. But you’ll need a dark sky to see these faint but stunning stellar aggregations. 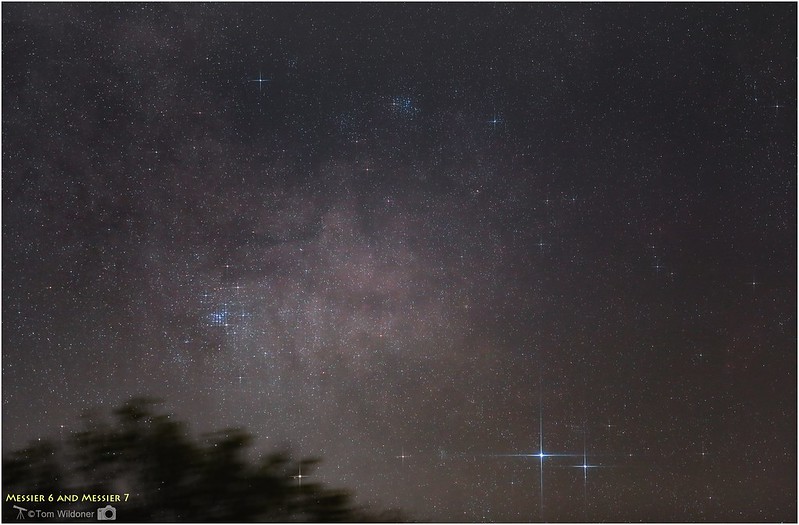 If you have a dark sky, you can see 2 famous star clusters – Messier 6 and Messier 7 – in the constellation Scorpius the Scorpion. In this photo, Messier 7 – aka Ptolemy’s Cluster – is above the tree on the left. Messier 6, the Butterfly Cluster, is a bit smaller, positioned near the center top of the image. Shaula and Lesath, the stinger stars in Scorpius are prominent in the lower right. Image via Tom Wildoner/ Flickr.

Two spectacular star clusters glitter near the “stinger stars” – Shaula and Lesath – in the constellation Scorpius. Messier 6 and Messier 7, abbreviated by astronomers as M6 and M7, are what’s known as open star clusters. Each is a crowd of stars that were formed from the same interstellar cloud. You can see them on summer evenings in the Northern Hemisphere, or winter evenings if you live in the Southern Hemisphere. They’re best viewed in a dark sky, and are a stunning sight through binoculars. 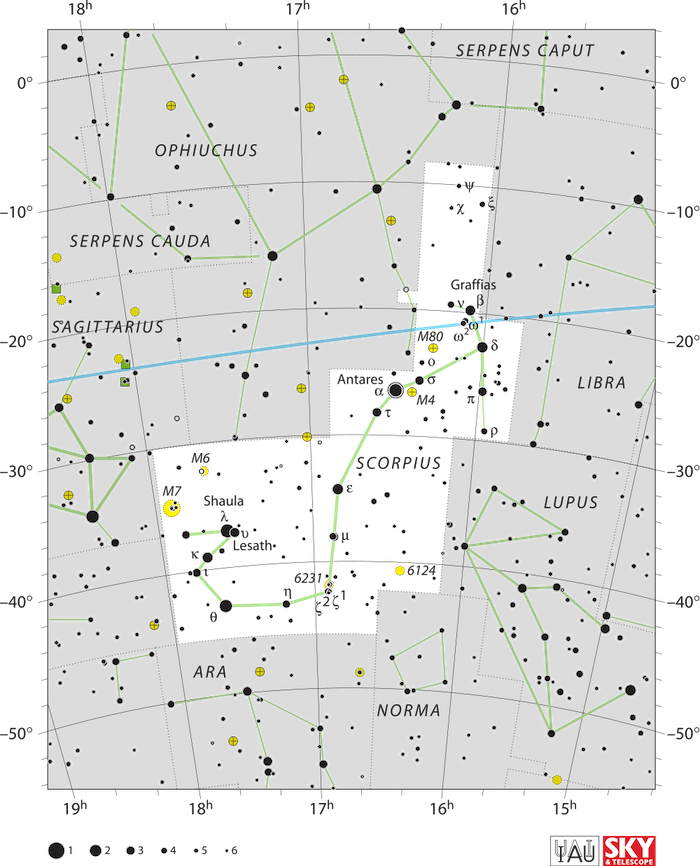 A map of the constellation Scorpius. The stinger stars, Shaula and Lesath, are at the end of the J-shaped constellation. If you draw an imaginary line from Lesath through Shaula, it will lead you to the star cluster M7. Image via IAU/ Sky & Telescope/ Wikimedia Commons.

How to find M6 and M7. These two star clusters are easy to spot in a dark sky near the curved tail of the constellation Scorpius. Scorpius is shaped like the letter J. There are two stars, Shaula and Lesath, at the end of the curved part of the J – the Scorpion’s Tail. They’re known as the Cat’s Eyes, or the stinger of Scorpius. If you draw an imaginary line from Lesath through Shaula, you’ll find M7, which is the brighter and larger of the two star clusters. From M7, M6 is only a short hop away.

Although M6 and M7 can be seen with the unaided eye on a dark, moonless night, the brilliance and beauty of these deep sky objects are magnificent through binoculars. You can’t miss them, assuming you have a dark sky. 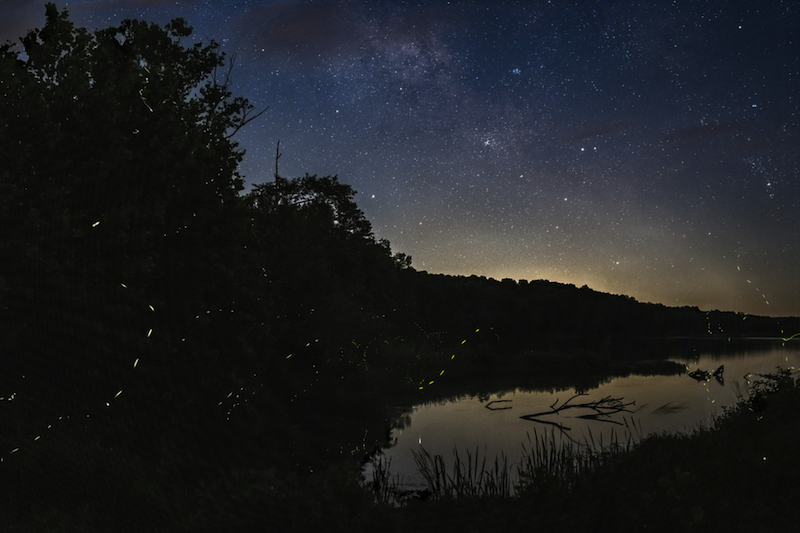 The 2 stars noticeably close together in this photo are Shaula and Lesath, representing the Stinger of the constellation Scorpius the Scorpion. The 2 fuzzy objects near these stars – to their left in this photo – are Messier 7 and Messier 6. And the streaks in the foreground? Fireflies dancing on a summer night in Yellowwood Lake, Indiana. Image via Zolt Levay/ Flickr.

If you’re in the northern U.S., Canada, or a similar latitude, you’ll need an unobstructed horizon towards the south to find M6 and M7. They are highest in the sky when due south, and even then, never climb very high in the sky. Meanwhile, from latitudes like those in the southern U.S., the clusters are easy to spot when highest in the south, above the Scorpion’s Tail. From the equator and most of the Southern Hemisphere, Scorpius is much easier to view,

M6 and M7 science. Even though M6 (Butterfly Cluster) and M7 (Ptolemy’s Cluster) appear close together on the sky’s dome, they are actually far apart in space. M6 is thought to be about 1,600 light-years away, while M7 is about 980 light-years. Thus the clusters are not related to each other, but only appear near each other along our line of sight.

But, within each cluster, the stars are related. Each cluster was born from a single interstellar cloud of gas and dust. The hundreds of stars in each cluster are indeed sibling stars, in that they are gravitationally bound to one another and travel in the same direction through space. Such a collection of stars is known as an open star cluster. 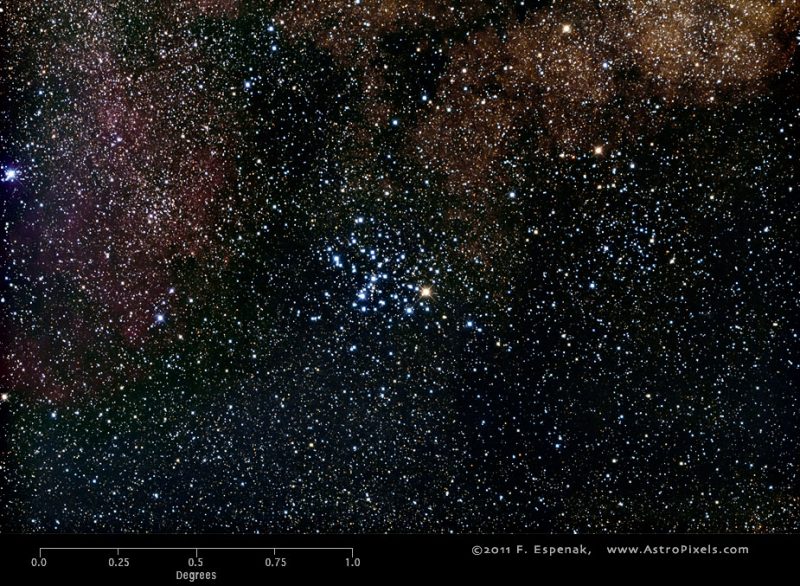 Messier 6 through a wide field telescope and camera. Image via Fred Espenak. 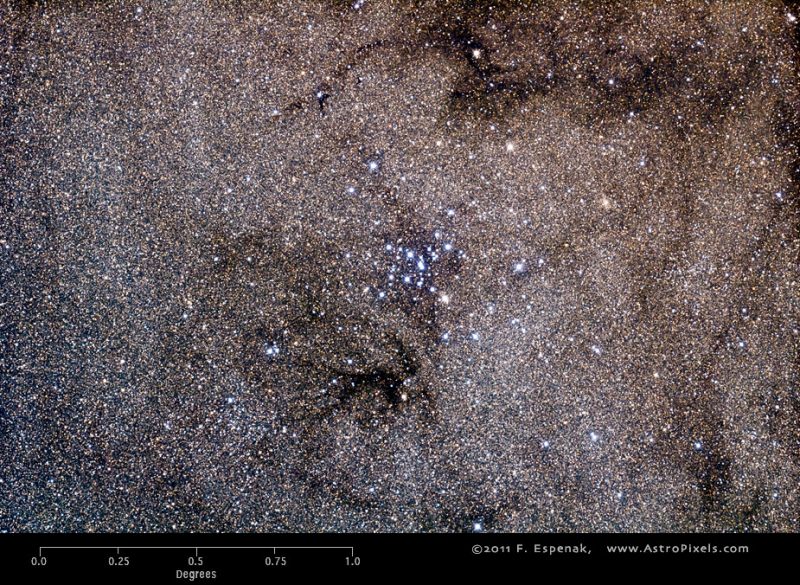 Messier 7 through a wide field telescope and camera. Image via Fred Espenak.

M6 and M7 reside near the galactic equator, the region on the sky’s dome where star clusters, star clouds, and nebulae most abound. Once you find M6 and M7, try locating other deep-sky binocular doubles, such as M8 and M20, and M16 and M17. Unlike M6 and M7, which reside within the Orion spiral arm of the Milky Way galaxy, these deep-sky wonders loom farther away, in the next spiral arm inward, the Sagittarius arm. (M6 and M7 are established open star clusters. But M8 and M20, and M16 and M17, are still incubating clouds of star formation.)