Posted by Eddie Irizarry and Deborah Byrd in Space | September 18, 2019

Why is the internet so chock-full of stories about asteroids on a collision course with Earth? At this rate, we should have been obliterated many times over already. Here comes the newest scare story: asteroid 2007 FT3. No, it won’t hit us, either. 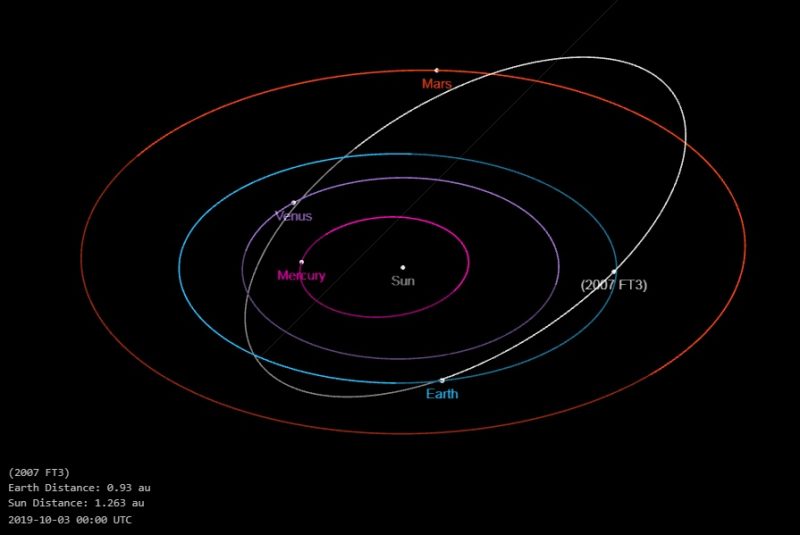 This illustration shows the positions of Earth and asteroid 2007 FT3 on October 3, 2019. Note the space rock’s orbit (not the object itself) does come close to the orbit of the Earth. Image via NASA/JPL.

Asteroid 2007 FT3 – a 1,115-foot (340-meter) space rock – is appearing in doomsday headlines suggesting the asteroid could hit our planet on October 3, 2019. Here’s an example: Deadly 1,100-Foot Asteroid Could Hit Earth In October, NASA Reveals. Sounds scary, right? But is it true? Is this asteroid really deadly? It’s only deadly if it kills something, and that’s not going to happen. Asteroid 2007 FT3 is not going to hit us. Of course, NASA knows that. What’s going on here? Why does the headline say NASA reveals?

The truth is, asteroid 2007 FT3 is likely to pass Earth at such an extreme distance that even big professional telescopes at major observatories won’t be able to detect it this October. How far will it be at its closest distance? Preliminary estimates indicate asteroid 2007 FT3 will pass on October 3, 2019, at almost 360 times the Earth-moon distance. That’s many millions of miles, an enormous distance!

Asteroid 2007 FT3 was discovered on March 20, 2007, from Mount Lemmon, in Arizona. It was observed only briefly – just 14 times over 1.2 days – and then became too faint to observe, disappearing back into the depths of space. Because it was observed for such a short time, there are uncertainties in its orbit. Those sorts of uncertainties for a newly observed, or briefly observed, asteroid are very, very normal and ordinary. They’re just part of the process.

Because of the uncertainties, however, 2007 FT3 does appear in a “risk list” maintained by astronomers at the Center for Near Earth Object Studies (CNEOS) at NASA’s Jet Propulsion Laboratory in Pasadena, California. The Sentry Risk Table is part of a highly automated collision monitoring system that continually scans the most current asteroid catalog for possibilities of future impact with Earth over the next 100 years. Asteroid 2007 FT3 does appear on the current Sentry Risk Table (although objects are removed from this table as their orbits become better known).

But being in a “risk table” doesn’t mean there’s actual risk. Look at the table carefully. Click into the numbers in the column labeled Impact Probability (Cumulative). You’ll see that 2007 FT3 has an extremely low chance of impacting Earth in October:

Let’s linger on the Sentry Risk Table a little longer. CNEOS, which maintains this table, explains on its website:

When interpreting Sentry pages, where information on known potential NEA [Near-Earth Asteroid] impacts is posted, one must bear in mind that an Earth collision by a sizable NEA is a very low probability event. Objects normally appear on the Risk Page because their orbits can bring them close to the Earth’s orbit and the limited number of available observations do not yet allow their trajectories to be well-enough defined. In such cases, there may be a wide range of possible future paths that can be fit to the existing observations, sometimes including a few that can intersect the Earth.

Whenever a newly discovered NEA is posted on the Sentry Impact Risk Page, by far the most likely outcome is that the object will eventually be removed as new observations become available, the object’s orbit is improved, and its future motion is more tightly constrained. As a result, several new NEAs each month may be listed on the Sentry Impact Risk page, only to be removed shortly afterwards. This is a normal process, completely expected. The removal of an object from the Impact Risk page does not indicate that the object’s risk was evaluated mistakenly: the risk was real until additional observations showed that it was not.

And so on and so on. We encourage you to read all of this page if you want to understand the Sentry system. 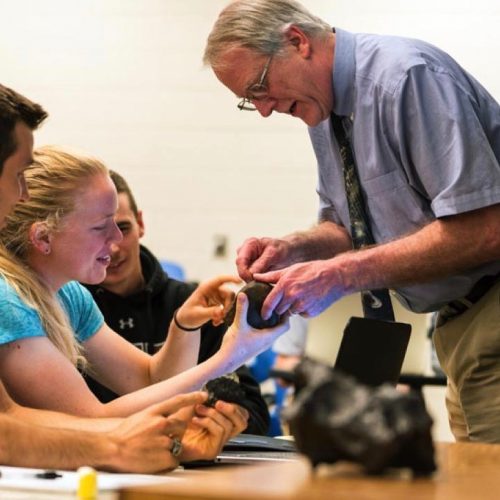 This MIT professor – Richard P. Binzel – helped develop an important tool for understanding asteroid risk and conveying it to the public: the Torino Scale. If you’re ever fearful of a particular asteroid, be sure to find out its ranking on the Torino Scale. That’ll nearly always make you feel better! Image via MIT.

Now let’s look at another important tool for understanding Near-Earth Asteroids (NEAs): the Torino Scale. It was created by astronomer Richard P. Binzel of MIT in 1995 and presented at a United Nations conference that year. CNEOS described the Torino Scale this way:

The Torino Scale, adopted by the [International Astronomical Union] in 1999, is a tool for categorizing potential Earth impact events. An integer scale ranging from 0 to 10 with associated color coding, it is intended primarily to facilitate public communication by the asteroid impact hazard monitoring community. The scale captures the likelihood and consequences of a potential impact event, but does not consider the time remaining until the potential impact. More extraordinary events are indicated by a higher Torino Scale value.

Asteroid 2007 FT3 has a Torino Scale ranking of 0, which indicates:

The likelihood of a collision is zero, or is so low as to be effectively zero.

Even with the poorly constrained orbit or limited data, NASA scientists estimate that on October 3, 2019, asteroid 2007 FT3 should pass at some 86 million miles (138 million km) from Earth.

2007 FT3 is categorized as an Apollo-type asteroid. It takes 1.2 years (438 days) to complete an orbit around the Sun. Its orbit – not the object itself – does come close to the orbit of the Earth, and it is therefore considered a potentially hazardous asteroid, by CNEOS:

Potentially Hazardous Asteroids (PHAs) are currently defined based on parameters that measure the asteroid’s potential to make threatening close approaches to the Earth. Specifically, all asteroids with a minimum orbit intersection distance (MOID) of 0.05 au [astronomical units] or less and an absolute magnitude (H) of 22.0 or less are considered PHAs.

We can’t see asteroids very well, because they’re small. This animation is built from Arecibo radar images of near-Earth asteroid 3200 Phaethon, acquired from December 15 through 19, 2017. Read more about these observations.

Do you see what’s going on here? In recent decades, astronomers have realized the potential for asteroids to strike Earth. That is a very real potential. The world as a whole has recognized that it’s important for a planet with 7.6 billion humans to understand the potential threat of asteroids, and to track asteroids, and even to discuss what we might do if we did learn an asteroid was heading our way. Hopefully, we would learn this some years before it happened, and not days before.

But all of this formalization of a potential threat – nomenclature, lists, acronyms – has also created a potential to create misunderstandings and fear. And, we all know, on the internet fear means clicks, and clicks mean $$.

Meanwhile, the asteroids are just out there, as they’ve been for billions of years, pursuing their orbits around the sun. If asteroid 2007 FT3 is re-observed in late September or early October 2019, the new observations might let astronomers better refine its orbit. Then, perhaps it’ll be removed from the Sentry Risk Table.

In the meantime, don’t worry. What you’re seeing here is just astronomy in action, and, in particular, the branch of astronomy that aims to keep us safe from asteroids. And the preliminary data – based on these astronomers’ best-possible observations and most careful orbit calculations – clearly indicate that this particular asteroid, 2007 FT3, poses no risk to our planet. 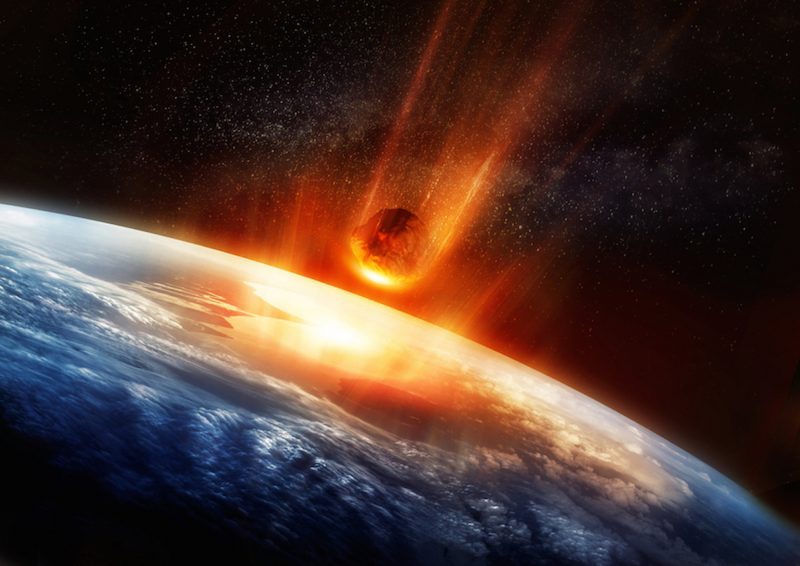 Artist’s concept of a large asteroid hitting Earth. Has this ever happened? Sure. Large asteroids have struck Earth in the past. Large craters on Earth – for example, Meteor Crater in Arizona – bear witness to an asteroid strike. Could a large asteroid strike us in the future? It’s possible, and that’s why astronomers are so busy nowadays with asteroid tracking. But, at this writing, no large asteroid is known to be on a collision course with Earth. Image via SolarSeven/ Shutterstock.