Asteroid 2004 BL86 came closer than any known asteroid this large until 2027. Information and photos of the asteroid, plus links to more.

Cool! Asteroid 2004 BL86 – passing closer on January 26 than any large asteroid of its size until 2027. Jean Paul Mertens this image and said it was seen through the telescope of Slooh.com in Chile.

An asteroid called 2004 BL86 by astronomers – twice as big as a cruise ship – swept safely past Earth on January 26, 2015. It came closer of any known space rock this large will until asteroid 1999 AN10 flies past Earth in 2027. This was the closest this particular asteroid will come to Earth for at least the next 200 years. Closest approach came at 16:19 UTC, or 11:19 a.m. EST, when the asteroid was approximately 745,000 miles (1.2 million kilometers) from Earth, or about three times the moon’s distance. Best night for observing with a small telescope and/or strong binoculars was the night of January 26. There’s still one online observation ahead that we know of, which you can access here beginning at 18:30 UTC, or 1:30 p.m. EST on January 27. Professional astronomers will continue watching in the days ahead. Even at its peak brightness, the asteroid was not be bright enough to view with the unaided eye. View best images of it here. Follow the links below for more:

How to watch the asteroid passage online on Tuesday, January 27

Monday, January 26 was the best night to observe through a telescope or strong binoculars

Be sure to check out this link to a cool video! It’s from Slooh.com’s live show, which took place this morning. Dr. Lance Benner, principal investigator for Goldstone Solar System Radar, was able to show an incredible video of images just taken last night (January 25) via Goldstone of the close approach of asteroid 2004 BL86. The video shows never-before-seen detail of this asteroid, including its newly discovered moon. 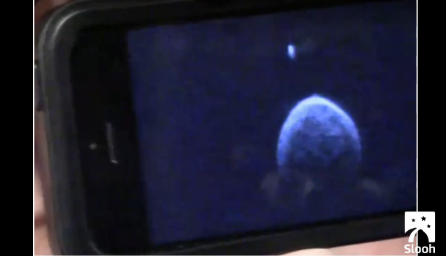 A video still of asteroid 2004 BL86 and its newly discovered moon from Goldstone Solar System Radar. The asteroid swept safely past Earth earlier on January 26. Image via Slooh.com. View the video segment.

Asteroid 2004 BL86 passed about three times the distance from Earth to the moon on January 26, 2015. Image via NASA/JPL-Caltech

Translate UTC to your timezone here. 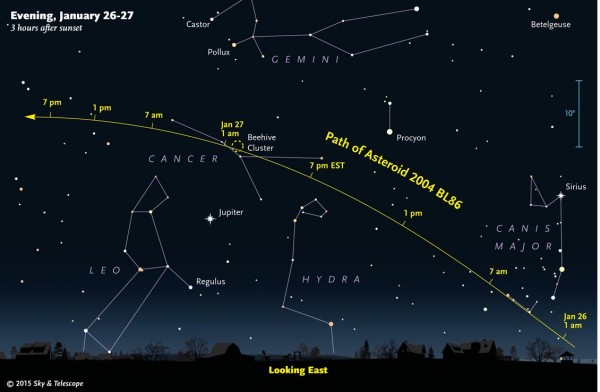 View larger. | The path of asteroid 2004 BL86 on January 26-27 carries it northward among the winter stars and makes it well positioned for viewing with a backyard telescope. Eastern Standard Time is shown, so be sure to make a time-zone correction for your location. Translate to your time zone here. Chart via skyandtelescope.com 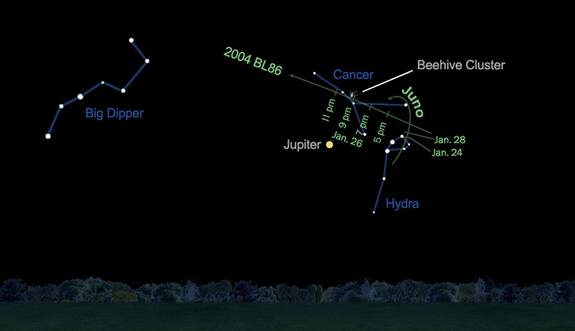 Through large binoculars and telescopes, near-Earth asteroid 2004 BL86 skimmed the edge of the Beehive star cluster. Image via NASA/JPL-Caltech 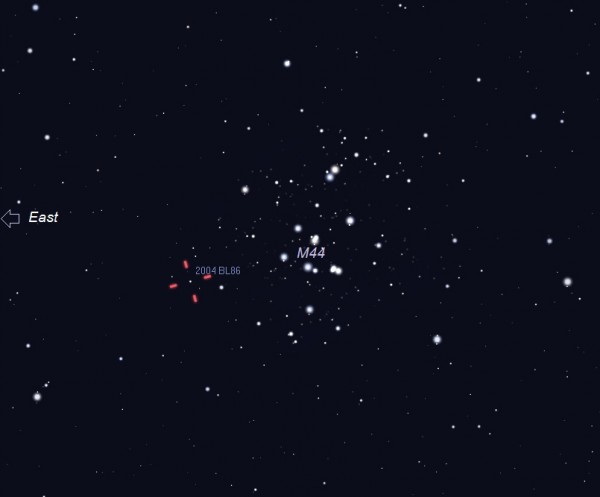 This illustration depicts asteroid 2004 BL86 at 12:22 a.m. EST (05:22 UTC) on the morning of January 27. As that time, it is passing near the famous Beehive star cluster, also known as M44, in the constellation Cancer. Graphic and caption via Stellarium via Eddie Irizarry / Astronomical Society of the Caribbean.

Monday, January 26 was the best night to observe through a telescope or strong binoculars The information that follows was written prior to January 26, for observers.

As night falls on January 26, both professional and amateur astronomers will be pointing their telescopes at the constellation Cancer, where the space rock’s motion will be observed as it flies past us in space. 2004 BL86 will reach visual magnitude of 9, meaning it will be observable as a faint star through telescopes with an aperture of 4 inch (10 cm) and bigger. Although it may be visible even with big binoculars, a steady mount and bigger optics will let an observer see the asteroid’s motion better.

In one way, the motion of 2004 BL86 will appear “slow,” that is, not as fast as an ordinary meteor or shooting star streaking across our night sky.

In another way, the asteroid’s motion will appear “fast,” faster than the moon moves in front of the stars. Astronomers estimate the asteroid will appear to move the equivalent of the width of a full moon in about 11 minutes. It will be moving at nearly three degrees every hour through the course of the night, in contrast to about half a degree per hour for the moon.

That means that observers with 6″ and bigger diameter telescopes will clearly see the asteroid moving across the sky!

Observers in the Americas, Europe and Africa may have the best views. Meanwhile, Australians and east Asians will have to look a few hours before the asteroid is brightest, when it night for them.

At 7:44 p.m. EST on January 26 (0044 UTC on January 27), the asteroid will be between the apparent position of Jupiter and the star Procyon. At that time, observers with computerized telescopes can point their instruments to star HIP 41843. By 7:51 p.m. EST on January 26 (0051 UTC on January 27) the space rock will be passing by star 34 Cancer (HIP 41904). Both stars are of magnitude 6. Note that the asteroid’s apparent closeness to a particular star may slightly differ due to the relative close distance of the space rock to our planet. Its nearness to us will change the perspective from point to point on Earth’s surface.

Don’t have a computerized telescope? If you can find the famous open cluster M44 (Beehive or Praesepe), you may witness one of the best asteroid sightings of your life. Point your telescope at M44, which lies between Jupiter and the star Pollux. Stellarium software shows that – on January 27 – between 12 a.m. EST (0500 UTC) and 12:45 a.m. EST (0545 UTC), the asteroid will be passing very close (eastern side) of this cluster. Amazing photo opportunity! Post at EarthSky Facebook, or submit here at our website if you do get a photo.

Experienced observers suggest the use of a wide angle (32mm or 35mm) eyepiece for this asteroid patrolling observation. These eyepieces capture more light and are best for dim objects.

You might be able to see a very slowly moving star. If you do, yes, that’s the asteroid.

Don Yeomans, who on January 9 retired as manager of NASA’s Near Earth Object Program Office after 16 years in the position, said:

I may grab my favorite binoculars and give it a shot myself.

Asteroids are something special. Not only did asteroids provide Earth with the building blocks of life and much of its water, but in the future, they will become valuable resources for mineral ores and other vital natural resources. They will also become the fueling stops for humanity as we continue to explore our solar system.

There is something about asteroids that makes me want to look up.

At this flyby of the asteroid, astronomers plan to observe it with microwaves, and to acquire radar-generated images of the asteroid during the days surrounding its closest approach to Earth.

Bottom line: The flyby of 2004 BL86 on January 26, 2015 will be the closest by any known space rock this large until asteroid 1999 AN10 flies past Earth in 2027. At the time of its closest approach, the asteroid will be approximately 745,000 miles (1.2 million kilometers) from Earth, or about three times the moon’s distance.