A space ant fires its lasers

A rare natural laser beaming from the heart of the spectacular Ant Nebula suggests the presence of a double star system. 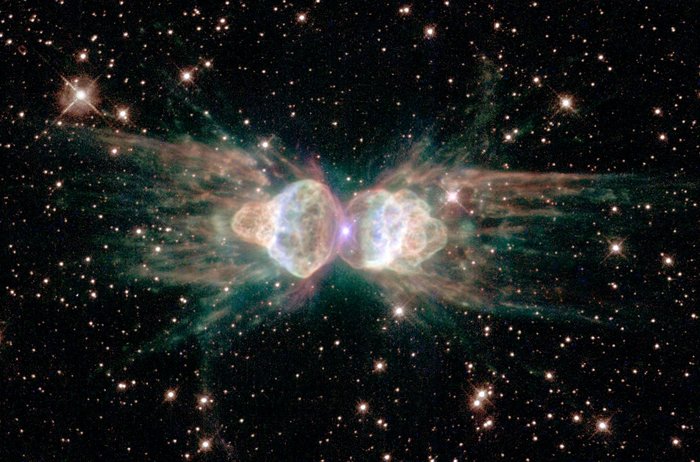 Here’s the Ant Nebula – aka Menzel 3, or Mz 3 – as captured by the Hubble Space Telescope. See the resemblance to the head and body of a garden ant? Image via NASA/ ESA/ and the Hubble Heritage Team (STScI/AURA).

The European Space Agency said on May 16, 2018 that its Herschel space observatory has observed a rare phenomenon: an unusual natural laser emission beaming from the core of the Ant Nebula. This nebula is a striking double-lobed cloud in space – located in the direction to the southern constellation Norma – and now it’s known to contain one of the few space infrared lasers discovered so far. ESA said the laser light beaming from the nebula suggests the presence of a double star system hidden at the nebula’s heart.

The Ant Nebula is what’s called a planetary nebula. In this case, the word planetary has nothing to do with planets. Instead, this sort of nebula represents the sloughed-off outer layers of a dying star. Our own sun, for example, will become a planetary nebula as it ages and begins to die.

By coincidence, astronomer Donald Menzel who first observed and classified this particular planetary nebula in the 1920s (it is officially known as Menzel 3 after him) was also one of the first to suggest that in certain conditions natural light amplification by stimulated emission of radiation – from which the acronym laser derives – could occur in gaseous nebulae. This was well before the discovery and first successful operation of lasers in laboratories in 1960.

When we observe Menzel 3, we see an amazingly intricate structure made up of ionized gas, but we cannot see the object in its center producing this pattern.

Thanks to the sensitivity and wide wavelength range of the Herschel observatory, we detected a very rare type of emission called hydrogen recombination line laser emission, which provided a way to reveal the nebula’s structure and physical conditions.

This kind of laser emission needs very dense gas close to the star. Comparison of the observations with computer models found that the density of the laser-emitting gas is around 10,000 times higher than that of the gas seen in typical planetary nebulae and in the lobes of the Ant Nebula itself.

Normally, the region close to a dead star – close in this case being about the distance of Saturn from our sun – is empty, because most of its material is ejected outwards. Any lingering gas would soon fall back onto it. Co-author Albert Zijlstra said:

The only way to keep gas close to the star is if it is orbiting around it in a disk. In this case, we have actually observed a dense disk in the very center that is seen approximately edge-on. This orientation helps to amplify the laser signal. The disk suggests the white dwarf [the dying star at the heart of the nebula] has a binary companion, because it is hard to get the ejected gas to go into orbit unless a companion star deflects it in the right direction.

Astronomers have not yet seen the expected second star, but they think that the mass from the dying companion star is being ejected and then captured by the compact central star of the original planetary nebula, producing the disk where the laser emission is produced.

Read more about the Ant Nebula and its laser from ESA 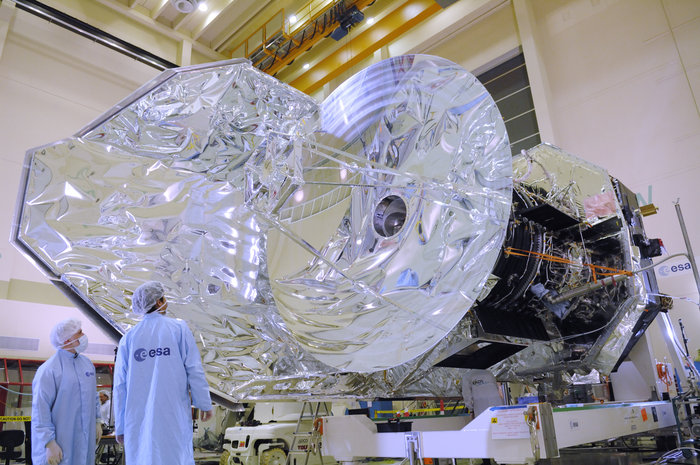 The Herschel telescope in the clean room. Image via ESA.

Bottom line: Observations by the Hershel space telescope suggest the presence of a double star system hidden at the heart of the Ant Nebula.