Young moon and bright Venus after sunset April 24 to 26

After the sun sets on April 24-26, 2020, look west for the waxing crescent moon near the brightest planet in Earth’s sky, Venus.

It has been glorious to see Venus – the brightest planet – in the western sky after sunset these past several months. In late April, Venus is brightest for this entire evening apparition. And now the moon is about to move through this part of the sky. Look for the young moon – a waxing crescent – beneath dazzling Venus on April 24 and 25, 2020. On April 26, the waxing moon and bright planet will be very close and a wonderful sight to see after the sun goes down.

On April 24, 2020, some of the world finds the moon just over one day old at sunset. For us in North America, the moon will be a bit older, nearly two days old as the sun sets on April 24. Generally speaking, it’s tough to see a day-old (or younger) moon, that is, a moon less than one day (24 hours) after the new moon. On April 24, find an unobstructed sunset horizon. Binoculars might come in handy. Don’t get too discouraged if you miss the moon that evening. If your sky is clear, there’s no way you can miss dazzling Venus, the second-brightest heavenly body of nighttime, after the moon.

On April 25, 2020, no matter where you live worldwide, the slender lunar crescent will be easier to spot. That’s because, on April 25, the moon presents a wider crescent that’s higher up in the sky at sunset – and, therefore, stays out longer after dark. On the average, the moon sets about 50 minutes later with each following day.

On April 26, 2020, the moon will be a fatter crescent still and higher still in the west after sunset. It’ll be glorious with Venus in the twilight sky.

To find out when the sun and moon set in your sky, click on this Sunrise Sunset Calendar, remembering to check the moonrise and moonset box.

After you first spot the young moon on any of these dates, notice that it sinks downward until it goes beneath the horizon. Because the Earth spins on its axis from west to east, the moon appears to cross our sky in the opposite direction – east to west – just as the sun does, and for the same reason. This is called the moon’s diurnal (daily) motion. The moon travels about 1/2 degree (its own angular diameter) westward every 2 minutes, or about 15 degrees westward per hour.

On the other hand – relative to the backdrop stars and planets of the zodiac – the moon travels eastward. This eastward movement of the moon in front of the constellations of the zodiac is due to the moon’s own orbital motion around Earth. That motion accounts for the day-to-day movement of the moon, the movement shown on the chart at the top of this post. The moon travels through the zodiac at the rate of about 1/2 degree (the moon’s own angular diameter) eastward per hour, or 13 degrees eastward per day.

Want to know which constellation of the zodiac presently lies behind the moon? Click on Heavens-Above. 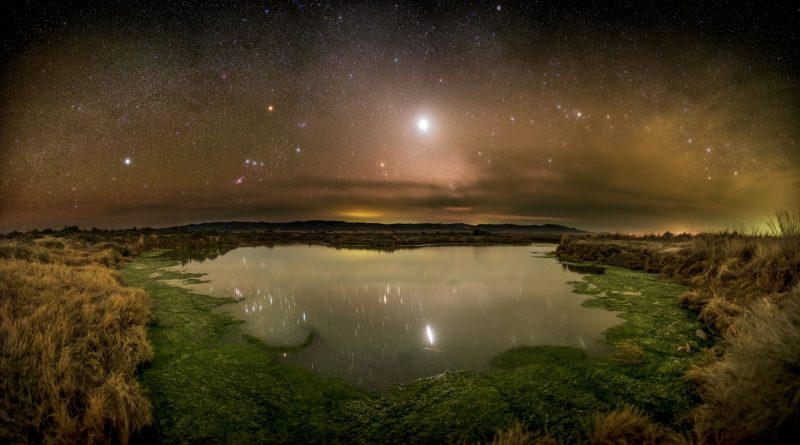 View at EarthSky Community Photos. | The bright object in this image is the planet Venus. Marc Toso captured it on April 18, 2020, in Horseshoe Springs, Utah. The moon will come back to this part of the sky – and sweep past Venus – after sunset around April 24 to 26. Thanks, Marc!

Bottom line: After the sun sets on April 24-26, 2020, look west for the waxing crescent moon near the brightest planet in Earth’s sky, Venus.

Read more: Venus at its brightest in late April