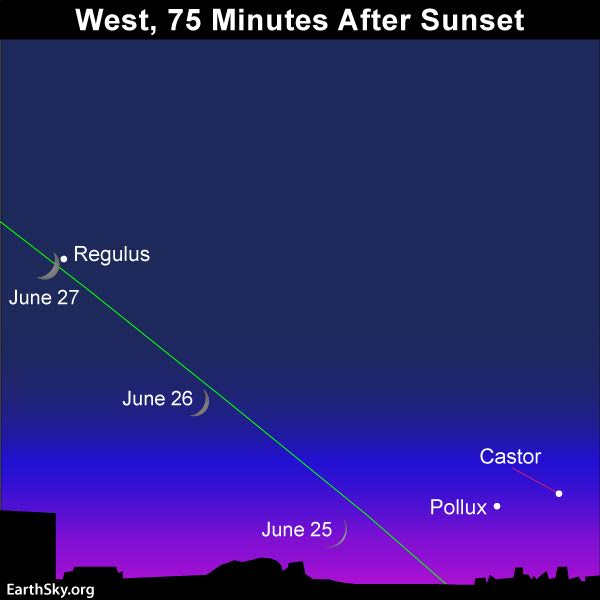 Tonight – June 25, 2017 – look for the young moon to adorn the western evening twilight. Just find an unobstructed horizon in the sunset direction. Then scan for the slender lunar crescent close to the horizon. The exact time will depend on your location, but try about 45 to 60 minutes after sundown. Binoculars always help out with any young moon hunt, especially if your sky is hazy or murky near your horizon’s sunset point.

From most places worldwide, except at far-northern latitudes, the moon will set better than hour after sunset on June 25. Click here to find out when the sun and moon set in your sky, remembering to check the moonrise and moonset box.

From the Northern Hemisphere, the brightest stars in the constellation Gemini, Castor and Pollux, might be visible to the right (north) of tonight’s waxing crescent moon. From North American mid-northern latitudes, the young moon pretty much aligns with Castor and Pollux on June 25.

On this date from mid-northern latitudes in Europe and Asia, the young moon sits a bit lower in the sky relative to these Gemini stars.

No matter where you live, be sure to look for the June 25 young moon as dusk is giving way to nightfall. After dark may be too late, because tonight’s young moon will follow the sun beneath the horizon soon after sunset. If you miss the young moon on June 25, try again tomorrow or the day after. Each day, a wider waxing crescent moon lies farther east of the setting sun. And so, as the days pass, the moon will appear higher up at sunset and set later after sundown.

Bottom line: On June 25, 2017, soon after sundown, look for the young crescent moon near the sunset point on the horizon.

Thank you! Your submission has been received!
Oops! Something went wrong while submitting the form.
END_OF_DOCUMENT_TOKEN_TO_BE_REPLACED