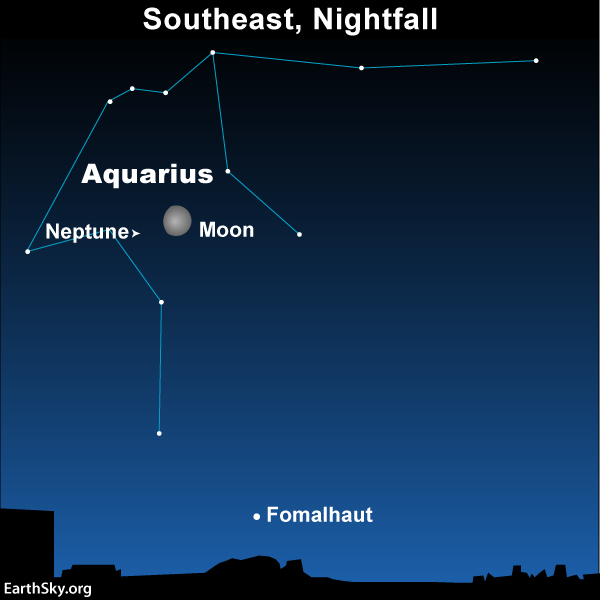 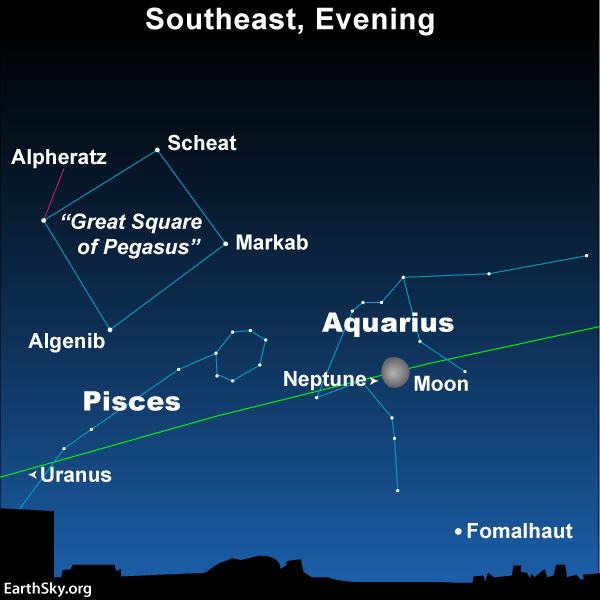 Neptune – now considered the most distant major planet from the sun by the International Astronomical Union – requires an optical aid to be seen.

Which background stars can you expect to see in the light of the bright moon? Possibly Fomalhaut, and the four stars in the Great Square of Pegasus.

From temperate latitudes in the Southern Hemisphere, Fomalhaut shines high overhead, whereas the Great Square of Pegasus appears in the northern sky.

If you want to find distant Neptune – assuming you have a telescope to enable you to see it – you’ll need a sky chart even more detailed than the one above. You’ll find a finder chart for Neptune (and Uranus) here.

Then you’ll need to familiarize yourself with the constellation Aquarius. With optical aid, a good sky chart, and lots of patience, you can star-hop to Neptune.

Then all you have to do is wait for a dark, moonless evening to seek out the solar system’s two most distant planet, Neptune.

Still want to find Neptune? Check out this article from SkyandTelescope.com, for the June 2016 to March 2017 observing season.

Bottom line: Tonight’s moon – October 12, 2016 – guides you to the great Square of Pegasus, the star Fomalhaut and the general location of Neptune in the sky. If you can familiarize yourself with this part of the sky, you’ll have better luck spotting Neptune in a moonless sky.

Thank you! Your submission has been received!
Oops! Something went wrong while submitting the form.
END_OF_DOCUMENT_TOKEN_TO_BE_REPLACED