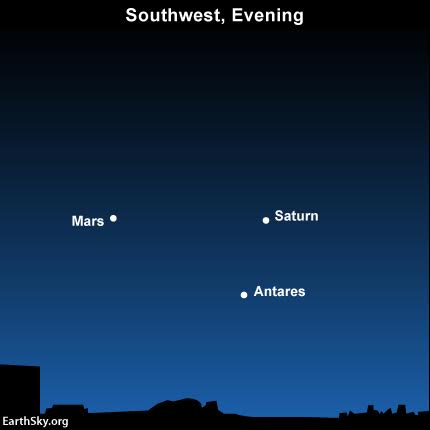 Tonight – September 13, 2016 – Mars presents its smallest phase of the year toward Earth. Did you know Mars shows phases? It does, though not as noticeably as Venus or Mercury, the two plants orbiting inside Earth’s orbit around the sun. You need a telescope and good seeing conditions to glimpse the Martian disk about 85% illuminated in sunshine around now. To the eye alone, Mars appears starlike, though this world tends to shine with a steadier light than the twinkling stars.

By a wonderful coincidence, the moon and Mars momentarily display the same phase on September 13. Neat, huh? And perfectly coincidental. Although the moon goes through the whole range of phases in September (and every month), Mars exhibits nearly the same phase all month long. Look for tonight’s waxing gibbous moon to provide a very good approximation of Mars’ present phase.

Because Mars orbits the sun outside the Earth’s orbit, Mars does not exhibit the whole range of phases, as our moon does.

In fact, only planets that orbit the sun inside of Earth’s orbit – Mercury and Venus – show the complete range of phases.

Planets that orbit the sun outside the Earth’s orbit – Mars, Jupiter, Saturn, Uranus and Neptune – always stay full or close to full, as Mars is doing now with its 85% phase.

Mars’ smallest phase always happens when this world is at quadrature, that is, making an angle with the Earth and sun that is 90 degrees. If you had a bird’s-eye view of the solar system plane, you’d see the sun, Earth and Mars forming that right angle in space now – and at every quadrature – with Earth at the vertex of this angle. See the diagram below.

At east quadrature on September 13, 2016, the day side of Mars covers 84.7% of the Martian disk, showcasing the smallest Martian phase of the year.

Incidentally, when the moon is at east quadrature, or 90o east of the sun, it’s at first quarter phase. So it’s really pretty ordinary, yes? Like Mars, the moon at eastern quadrature climbs highest up in the sky about six hours after the sun soars to its highest point at solar noon (midday).

Yet, unlike Mars, whose phase is conspicuously gibbous at east quadrature, the lunar disk is 50% illuminated at this juncture.

Martian highlights for the year 2016

At west quadrature on February 7, 2016, the Martian disk was more greatly illuminated than at east quadrature on September 13, 2016 (89.9% versus 84.7%). The difference is due to Mars’ highly eccentric (oblong) orbit around the sun, which causes Mars’ distance to be far from equal at each Martian quadrature.

Bottom line: As darkness falls on September 13, 2016, look for the waxing gibbous moon to simulate the planet Mars’ smallest phase of the year.

Thank you! Your submission has been received!
Oops! Something went wrong while submitting the form.
END_OF_DOCUMENT_TOKEN_TO_BE_REPLACED