Find Mercury, below Venus, after sunset 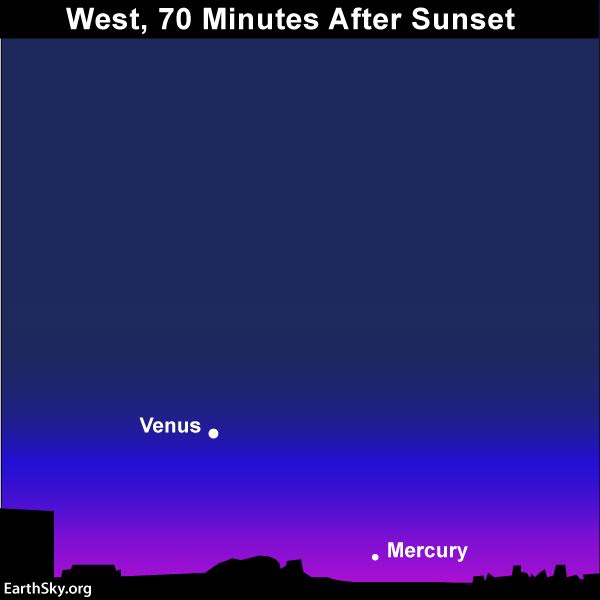 In the first few weeks of July 2018, Mercury continues its fine showing in the west after sunset. You’ll find Mercury – the innermost planet of our solar system – beneath Venus, the third-brightest celestial object to light up the sky after the sun and moon. Look westward, in the general direction of sunset, as soon as the sky begins to darken. If you can’t see Mercury beneath dazzling Venus in the deepening dusk with the eye alone, then try scanning with binoculars first. After you spot it, remove the binoculars and look with your eye alone.

Given clear skies, almost every place worldwide should be able to spot Mercury beneath Venus as dusk gives way to darkness in early July 2018. The exceptions are the far-northern regions of the globe, where continuous or near-continuous daylight extinguishes nighttime at this time of year.

Mercury, the closest planet to the sun, and Venus, the second-closest planet, are called inferior planets because they orbit the sun inside Earth’s orbit. Since Mercury never stays far from the sun in Earth’s sky, the innermost planet is oftentimes lost in the sun’s glare. However, Mercury can be viewed when it’s far enough east of the sun to be glimpsed after sunset, or far enough west of the sun to be glanced upon before sunrise. At present, Mercury is nearing its greatest eastern (evening) elongation of 26 degrees east of the sun. So Mercury is now staying out for a maximum amount of time after sunset.

Mercury is easily as bright as a 1st-magnitude star right now but may be hard to see in the glare of evening twilight, especially from far northerly latitudes. Mercury’s phase is waning in the evening sky, so this world will slowly but surely dim over the course of this month. In other words, catch Mercury while you can.

Two other planets are out at nightfall and early evening: brilliant Jupiter and modestly-bright Saturn. The red planet Mars is now rising in the east after Venus sets (around mid-evening). Seek for Mars, which is about the same brightness as Jupiter, beneath the golden planet Saturn. Click here for a recommended almanac providing Venus’ setting time and Mars’ rising time in your sky. And check out EarthSky’s guide to the bright planets; it can help you follow the planets throughout this and every month.

Bottom line: In early July, 2018, find an unobstructed horizon in the direction of sunset, and then seek for Mercury, the innermost planet, beneath dazzling Venus in your western sky. Try looking as soon as the sky begins to darken. Mercury will set not long after the sun.

Thank you! Your submission has been received!
Oops! Something went wrong while submitting the form.
END_OF_DOCUMENT_TOKEN_TO_BE_REPLACED