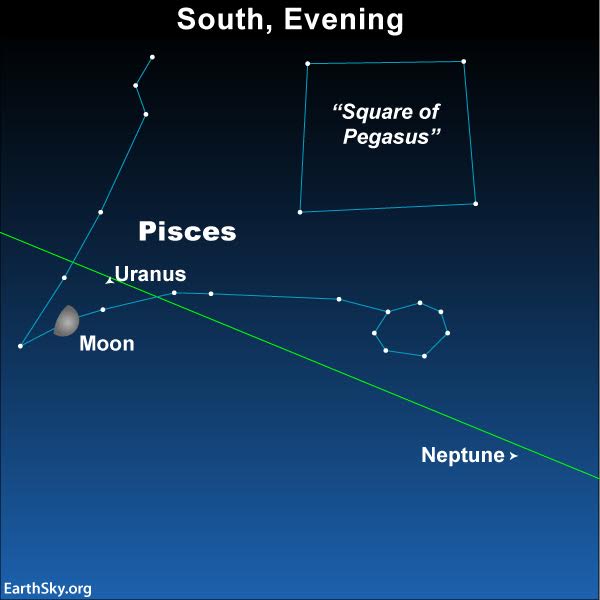 Tonight – December 27, 2017 – as darkness falls, the waxing gibbous moon will be rather close to the planet Uranus on the sky’s dome. Just don’t expect to see Uranus, the seventh planet outward from the sun, by the moon this evening, at least not with the unaided eye.

On a dark, moonless night, practiced sky watchers with exceptional vision can barely perceive this planet as a faint speck of light. In the moon’s glare … probably not.

Toward the end of the first week in January 2018, when the moon drops out of the evening sky, try star-hopping to Uranus in a dark sky. You’ll probably need binoculars, a detailed sky chart and some patience to find Uranus in front of the graceful V-shaped constellation Pisces.

The moon will swing to the south of Uranus, as the moon makes its monthly rounds through the constellations of the zodiac.

Uranus is a mighty gas or ice giant planet in the outer solar system. It is much, much larger than our moon. Neptune only appears small and faint because of the planet’s much greater distance from Earth. Uranus resides about 19.6 astronomical units away from Earth. That’s nearly 8,000 times farther than tonight’s moon.

You’ll find a couple of useful charts on these pages:

Bottom line: As darkness falls on December 27, 2017, the waxing gibbous moon shines close to the planet Uranus on the great dome of sky.

Thank you! Your submission has been received!
Oops! Something went wrong while submitting the form.
END_OF_DOCUMENT_TOKEN_TO_BE_REPLACED