Moon near Antares and Saturn May 11-13 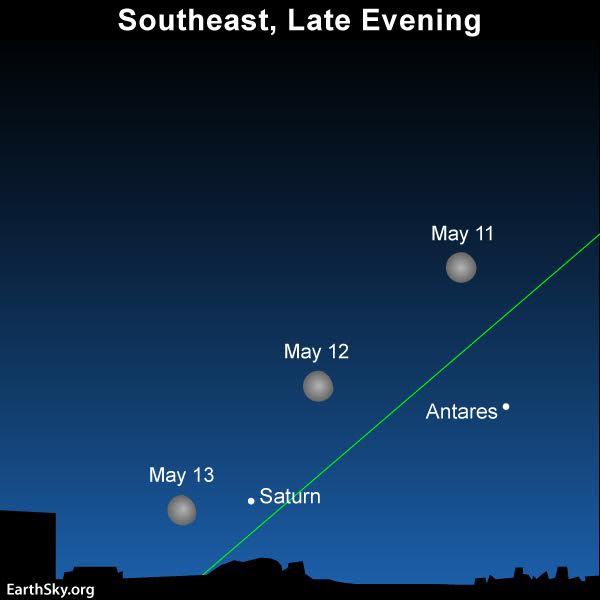 Click here for recommended almanacs; they can help you find the rising times of the moon, Antares and Saturn into your sky.

Saturn is nearly at its best and will be closer to the moon on the night of May 12. Read more about Saturn at tomorrow’s night sky post.

Or check out this article on Saturn: Got 5 minutes? Learn to see Saturn

Tonight, focus on ruddy Antares, the brightest star in the constellation Scorpius the Scorpion. It’s a red supergiant star, whose immense size makes our sun appear puny. Although Antares’s size isn’t known with absolute precision, it’s thought that its radius is better than three times the Earth’s distance from the sun, a distance commonly called the Astronomical Unit (AU).

In other words, if Antares replaced the sun in our solar system, its circumference would extend well beyond the orbit of Mars and roughly 60% the way to Jupiter. Yes, our sun is huge, with the diameter of 109 Earths and the volume of about 1.3 million Earths. Yet Antares’ diameter spans about 650 sun diameters and its volume is somewhere around 275 million suns. Talk about gargantuan!

The name Antares means “like Mars” because of the similarity in color (and sometimes brightness) of Antares and the red planet Mars. In February 2018, Mars and Antares will be in conjunction and at virtually the same brightness, giving you an opportunity to try to distinguish the ruddy star from the red planet in the morning sky.

Bottom line: On the nights of May 11, 12 and 13, 2017, watch for the bright waning gibbous moon to shine near the red star Antares and golden planet Saturn.

TwitterFacebookPinterestBufferShare
Posted
May 11, 2017
in
Science Wire

Thank you! Your submission has been received!
Oops! Something went wrong while submitting the form.
END_OF_DOCUMENT_TOKEN_TO_BE_REPLACED