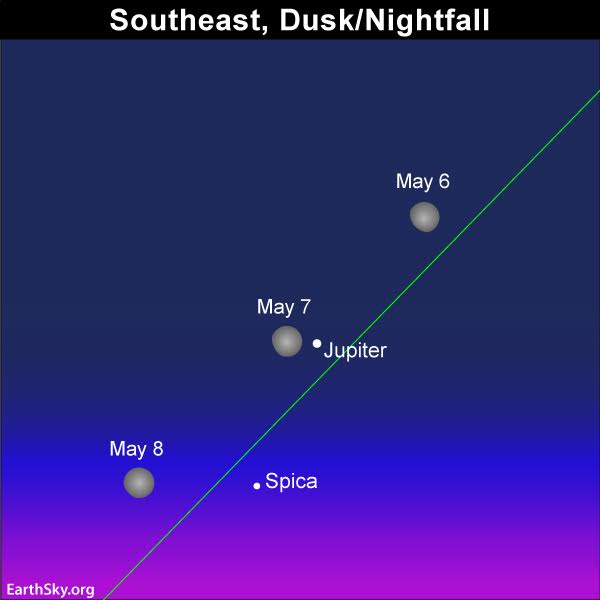 Tonight – May 6, 2017 – and for the next few evenings, watch for the moon and the dazzling planet Jupiter to pop out almost immediately after sunset. Then as dusk ebbs into nightfall, look for the star Spica to come out below Jupiter. On May 6, Spica is almost on line with the bright waxing gibbous moon and Jupiter.

The grand celestial procession on May 6-8, 2017 – the moon, Jupiter and Spica – will travel westward across the nighttime sky for the same reason that the sun goes westward during the day. It’s because the Earth spins from west-to-east on its rotational axis, causing the sun, moon, stars and planets to rise in the east, set in the west and to go westward across our sky each day.

The moon’s daily change of position is due to the moon’s orbital motion around Earth.

Watch for yourself – and contemplate the moon moving in orbit around Earth – as the moon swings by Jupiter and then the star Spica over the next few days.

Bottom line: Use tonight’s moon – May 6, 2017 – to see a grand procession of celestial bodies. The moon and Jupiter are the evening sky’s brightest objects. The star Spica is also bright and noticeable nearby.

TwitterFacebookPinterestBufferShare
Posted
May 6, 2017
in
Sky Archive

Thank you! Your submission has been received!
Oops! Something went wrong while submitting the form.
END_OF_DOCUMENT_TOKEN_TO_BE_REPLACED