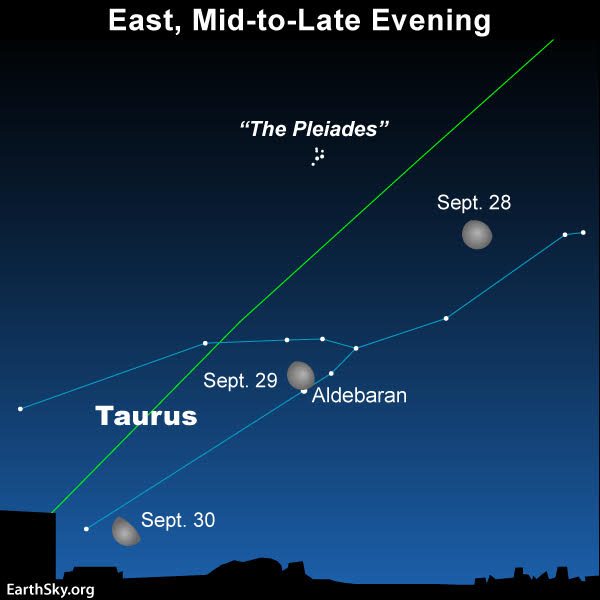 On September 28, 29 and 30, 2018, watch as the waning gibbous moon sweeps eastward through the constellation Taurus the Bull. The bright moon might make it tough to see all of the starlit figure of the Bull on these nights. But you should be able to make out Aldebaran, Taurus’ brightest star, as well as the tiny, misty, dipper-shaped Pleiades star cluster.

If you’re not one to stay up late, get up before daybreak to view the moon and Taurus in the predawn sky.

From the Northern Hemisphere, the moon and Taurus’ two major signposts – Aldebaran and the Pleaides – may well be up before your bedtime.

From temperate latitudes in the Southern Hemisphere, Taurus won’t be up until very late evening, or fairly close to the midnight hour.

Click here and check the moonrise and moonset box to find out when the moon rises into your sky.

Click here and check Aldebaran as your celestial object of interest to find out when Aldebaran rises into your sky.

Recently, on September 3, 2018, the moon occulted (passed in front of) Aldebaran, presenting the final occultation of a monthly occultation series that started on January 29, 2015. But month by month, and year by year, the moon’s trajectory will slowly but surely shift northward as it goes through Taurus the Bull. In fact, for the next 15 years, the moon will be sweeping in between Aldebaran and Alcyone, Pleiades’ brightest star.

The monthly occultation series involving the moon and the Pleiades star Alcyone will take place from September 5, 2023, till July 7, 2029.

Bottom line: On September 28, 29 and 30, 2018, watch the bright waning gibbous moon journey eastward through the constellation Taurus the Bull.

Thank you! Your submission has been received!
Oops! Something went wrong while submitting the form.
END_OF_DOCUMENT_TOKEN_TO_BE_REPLACED