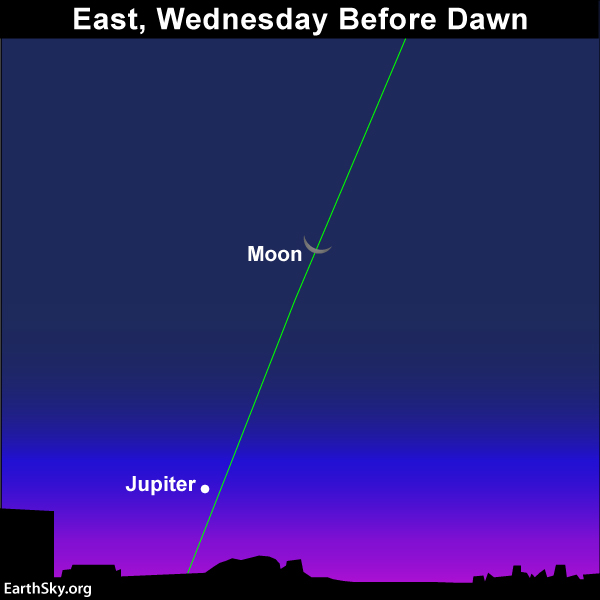 Tonight – October 25, 2016 – the waning crescent moon crosses the Earth’s orbital plane going from south to north. So, as the world wakes up before daybreak tomorrow (October 26), the moon will on or near the ecliptic – Earth’s orbital plane projected outward onto the great dome of sky. When the moon crosses the ecliptic, going from south to north, the moon is said to be at its ascending node.

More about ascending node below, and about what it means for solar and lunar eclipses viewed from our world. But first, look at the chart above. The moon is about to sweep past the very bright planet Jupiter in the east before dawn. On the morning of October 26 note that the bow of the lunar crescent points in Jupiter’s direction.

The moon will be edging closer to Jupiter in the next few mornings, as shown on the chart below:

Okay so … what’s so special about the moon at ascending node? It’s only when the moon is on the ecliptic – at ascending or descending node – that an eclipse can occur. For us in North American, the very special date of a very special eclipse will be August 21, 2017. That’ll be the first total solar eclipse visible from the contiguous United States since 1979. No kidding … make your hotel reservations now!

There’s no eclipse in October 2016, because it’ll be a waning crescent moon – not a new moon or full moon – that aligns with the moon’s ascending node.

At that moment, the waning crescent moon will still be below the U.S. horizon, because the moon at this phase appears in the morning sky. Many of our friends in the world’s Eastern Hemisphere will actually see the moon at the moment that it crosses the ecliptic.

Bottom line: No eclipse will happen in October, 2016, because it’ll be a waning crescent moon – not the new moon or full moon – that aligns with the moon’s ascending node.

More about the first total solar eclipse in mainland United States since 1979.

Thank you! Your submission has been received!
Oops! Something went wrong while submitting the form.
END_OF_DOCUMENT_TOKEN_TO_BE_REPLACED