Moon moves through Taurus the Bull 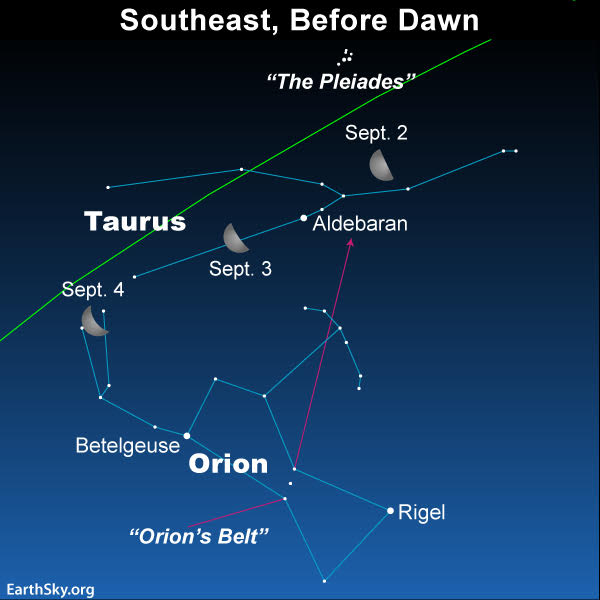 The next few early mornings – September 2 to 4, 2018 – look for the moon to sweep through the constellation Taurus the Bull. This is one of our sky’s most prominent constellations, an easy one to identify, even from small cities. If you’re a night owl, you might spot the moon and constellation Taurus above your eastern horizon before your bedtime.

But the view of the moon and Taurus is best before dawn, when they’ll be highest in the sky.

Let the moon guide your eye to the constellation Taurus’ two major signposts, the bright star Aldebaran in the V-shaped Face of the Bull and the tiny, dipper-shaped Pleiades star cluster, also known as the Seven Sisters.

Although the moon will move out of Taurus after several more days, and will leave the morning sky in about a week, you can always use Orion’s Belt to star-hop to the star Aldebaran and the Pleiades cluster.

From around the world on the morning of September 2, note that the lit side of the waning moon is pointing eastward, or in the direction of Aldebaran. Relative to the backdrop stars of the zodiac, the moon travels 1/2 degree (its own angular diameter) eastward per hour, or about 13 degrees (26 moon diameters) eastward per day. That’s because the moon, in its orbit, goes full circle in front of the constellations of the zodiac every month.

The feature sky chart above shows the sky scene for mid-northern North American latitudes. At this same time and date in the world’s Eastern Hemisphere, you’ll find the moon somewhat offset toward the previous date. In fact, as seen from Moscow, Russia, the moon will be pretty much due north of Aldebaran in the September 3 predawn/dawn sky.

The moon will occult – cover over – Aldebaran in the northernmost regions of the globe on September 3, 2018. This will be the final occultation in a series of 49 monthly occultations of Aldebaran that started on January 29, 2015.

From here on out, from everywhere worldwide, the moon will swing to the north of Aldebaran every month for nearly 15 years, or until the next series of 48 monthly occultations begins on August 18, 2033, and concludes on February 23, 2037.

Bottom line: Let the moon be your guide to the constellation Taurus the Bull in early September, 2018. Then use Orion’s Belt to locate Taurus when the moon moves away.

Thank you! Your submission has been received!
Oops! Something went wrong while submitting the form.
END_OF_DOCUMENT_TOKEN_TO_BE_REPLACED