Moon and Spica on September 4 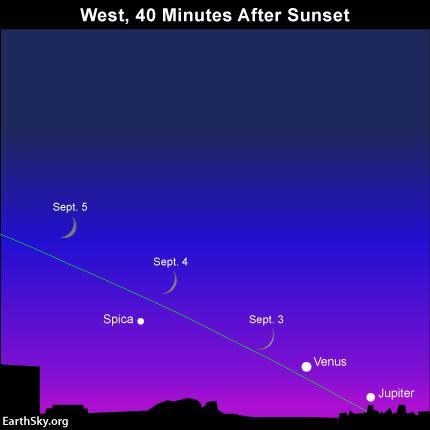 Tonight – September 4, 2016 – after sunset, the slender waxing crescent moon shines quite close to star Spica. Look first for the moon, and the nearby star popping out at nightfall will be Spica, the brightest in the constellation Virgo the Maiden.

Of course, when we say the moon is near Spica, we mean the two are close together on the sky’s dome. The moon and Spica are actually nowhere close together in space. The moon is somewhat over 250 thousand miles (over 403 thousand km) away from Earth on the evening of September 4. In contrast, the star Spica lies some 260 light-years distant.

This evening, the sun resides about 371 times the moon’s distance from Earth. But Spica is way far away, at about 16,000,000 times the distance of our sun. At Spica’s distance, our sun wouldn’t even be visible to the unaided eye.

At dusk, or about 20 to 30 minutes after sunset, see if you can catch the planet Venus (and possibly the planet Jupiter) near the western horizon. This will be before Spica pops out at nightfall. Binoculars could come in handy when seeking out Venus (and especially Jupiter).

Keep in mind that the lit side of the waxing crescent moon points in the direction of Venus (and Jupiter). Venus is the brighter of these two planets, and is the easier one to see, because Venus shines higher in the sky at sunset and stays out later after sundown.

As darkness falls on these September 2016 evenings, watch for Venus to climb upward day by day, and for the star Spica to fall downward. Venus and Spica will finally meet up for a conjunction on September 18, 2016.

Bottom line: On September 4, 2016, use the waxing crescent moon to find the dazzling planet Venus at dusk and the star Spica at nightfall.

Thank you! Your submission has been received!
Oops! Something went wrong while submitting the form.
END_OF_DOCUMENT_TOKEN_TO_BE_REPLACED