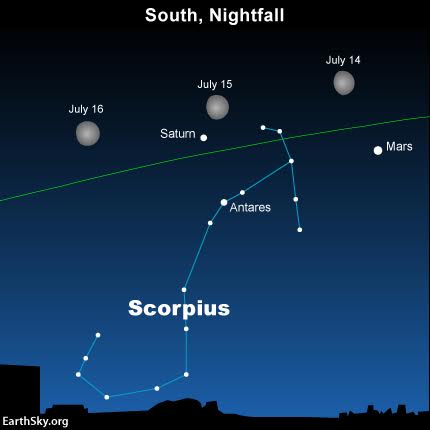 Tonight – July 14, 2016 – and for the next couple of evenings, you can’t miss the waxing gibbous moon as darkness falls. Use the moon to guide you to two planets – Mars and Saturn – plus the bright star Antares over the next few nights.

The Red Planet is fainter now than it was a month ago, but it’s still a sight to behold.

Because Mars and Saturn are planets, they shine by reflecting the light of the sun. Antares, being a star, shines by its own light.

There’s a third planet in the July, 2016 sky. Look westward after darkness falls to view the largest world in our solar system, Jupiter.

Dazzling Jupiter – brighter now than Mars, and much brighter than Saturn – will set in the west by around mid-evening. Be sure to view this world at nightfall. Meanwhile, the moon, Mars and Saturn (plus the star Antares) will stay out until well after midnight.

Mars, Jupiter and Saturn are called superior planets because they orbit the sun outside of Earth’s orbit. Mars is the fourth planet outward from the sun, whereas Jupiter is the fifth, and Saturn the sixth.

We list the distances of solar system planets from the sun in astronomical units (AU) on the chart below.

Mean distance (semi-major axis) in AU from sun to each planet.

Planets that orbit the sun inside of Earth’s orbit – Mercury and Venus – are called inferior planets. Both of these worlds – especially Mercury – are difficult to see right now because they follow the sun beneath the horizon so shortly after sunset. We’ll talk more about the upcoming conjunction of Mercury and Venus on July 16.

Bottom line: Use the moon to find Mars, Saturn and Antares as darkness falls on July 14, 2016.

Thank you! Your submission has been received!
Oops! Something went wrong while submitting the form.
END_OF_DOCUMENT_TOKEN_TO_BE_REPLACED