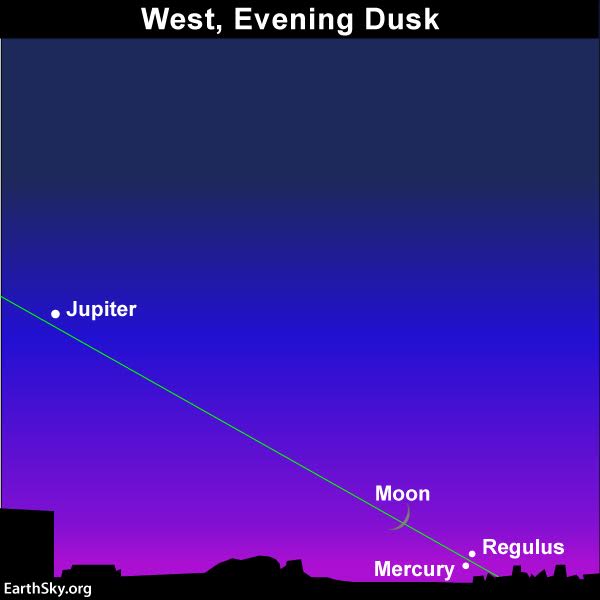 Tonight – July 25, 2017 – if you have a clear sky and an unobstructed western horizon, you might catch the furtive rendezvous of the planet Mercury and star Regulus at evening dusk. It won’t be easy, especially at northerly latitudes. At mid-northern latitudes – like those in the U.S. and Europe – the twosome will follow the sun beneath the horizon somewhat more than one hour after sunset.

Start your search half an hour to 45 minutes after sunset. Undoubtedly, binoculars will come in handy for this challenging observation!

Click here for recommended sky almanacs; an almanac can help you find Mercury’s setting time in your sky.

Want to know more about Regulus? Click here. It’s the brightest star in the constellation Leo and represents the Lion’s Heart.

Here’s one tip that might help. As shown on our chart at top, an imaginary line from the very bright planet Jupiter through the July 25 moon points in the direction of the planet Mercury and Regulus. Jupiter and the waxing crescent moon will be the first two celestial bodies to pop into view, shortly after sunset

And, by the way, the green line on our chart also depicts the ecliptic, or pathway across our sky’s dome of the sun, moon and planets. Even if you don’t see Mercury and Regulus, think about this imaginary line in our sky. It can help you get a sense of the solar system in 3D, since it represents, more or less, the plane of our solar system.

If you do have a clear sky after sunset on July 25 – and you look, and see something – but that something, so near the sunset glare, appears as a single starlike point of light, that point will probably be Mercury. This world shines over two times brighter than Regulus, which is nonetheless a 1st-magnitude star. Just know that the luster of both Mercury and Regulus will be subdued by glare of evening twilight.

Bottom line: Tonight – July 25, 2017 – if you have a clear sky and an unobstructed western horizon, you might catch the furtive rendezvous of the planet Mercury and star Regulus at evening dusk. If all goes well, you can see three planets by nightfall: Mercury, Jupiter and Saturn.

Thank you! Your submission has been received!
Oops! Something went wrong while submitting the form.
END_OF_DOCUMENT_TOKEN_TO_BE_REPLACED