Corona Borealis looks like the letter C. A dark sky is best for seeing this faint semicircle of stars.

Tonight, look for the constellation Corona Borealis, also known as the Northern Crown. You’ll need a pretty dark sky to see it, but, if you have one, the constellation is easy to pick out because it makes the shape of the letter C. Hopefully, tonight’s waxing crescent moon won’t be too intrusive, but remember that the last week of July 2019 will offer deliciously dark skies.

To see this famous C-shaped assemblage of stars from the Northern Hemisphere, during the evening hours in July, you’ll be looking high overhead. From the Southern Hemisphere, the constellation is low in the northern sky. The Corona Borealis constellation is distinctive. It looks like a half-circle, in the middle of which is a white jewel of a star called Alphecca or Gemma.

R and T Corona Borealis are famous variable stars in this constellation. Image via skyandtelescope.com.

Arcturus has already passed its highest point in the evening at this time of year and is slowly descending to the west. Vega is still high in the east on July evenings. With dark skies you will notice the orange color of Arcturus, and Vega’s bright blue-white tinge.

Corona Borealis can be found between these two stars, though closer to Vega. Remember, a dark sky is best for seeing the faint semicircle of stars composing this constellation. 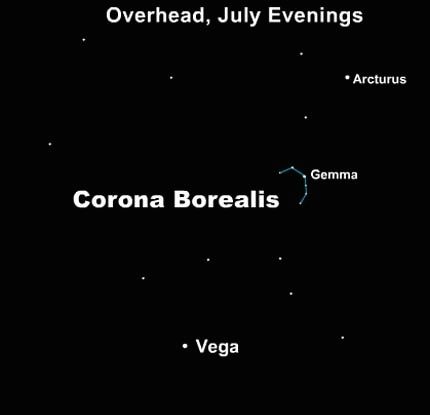 Look for Corona Borealis between the stars Vega and Arcturus.

By the way, the meaning of the Latin star name Gemma should be obvious. This star is the gem of the Northern Crown.

But the star is also called Alphecca, from an Arabic phrase meaning the bright one of the dish.

Gemma, aka Alphecca, is an eclipsing binary system. It consists of a smaller sunlike star that passes in front of a brighter star every 17.4 days, as seen from our earthly vantage point. 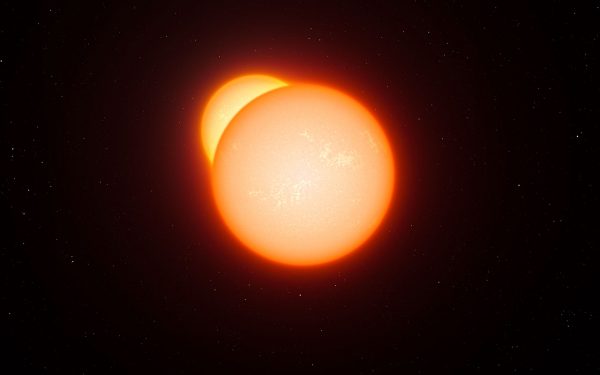