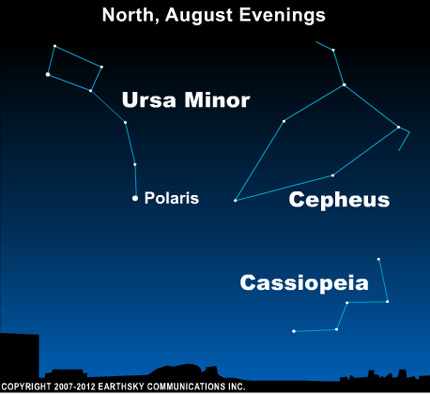 Tonight, see if you can find the constellation Cepheus, which represents a King. This constellation is faint, but its distinctive shape makes it easy to locate if you look in the north on August and September evenings.

At nightfall Cepheus appears to the upper right of Polaris, the North Star. Then this constellation rotates around Polaris in a counter-clockwise direction during the night. It swings high over Polaris after midnight, and then sweeps to the left side of Polaris around dawn.

Cepheus resembles the stick house we all drew as children – and that children today still draw – with a square for the base and a triangle for the roof. In the case of Cepheus, the tip of the roof (a star known as Gamma Cephei, or Errai) points generally northward.

In the sky, “northward” always means “toward the sky’s north pole,” or toward Polaris. Thus the roof of the house in Cepheus is pointing mostly north, even though – as darkness falls – that means it’s pointing sideways and downward.

Sky chart of the constellation Cepheus the King

In Greek mythology, Cepheus represents a King of Ethiopia. To find Cepheus, you might want to locate a more prominent constellation, Cassiopeia the Queen. For more about Cassiopeia, see yesterday’s sky chart.

Thank you! Your submission has been received!
Oops! Something went wrong while submitting the form.
END_OF_DOCUMENT_TOKEN_TO_BE_REPLACED

Deneb: How astronomers know how far away it is

Will the Tau Herculid meteors produce a storm?