Moon in front of Cancer on February 27 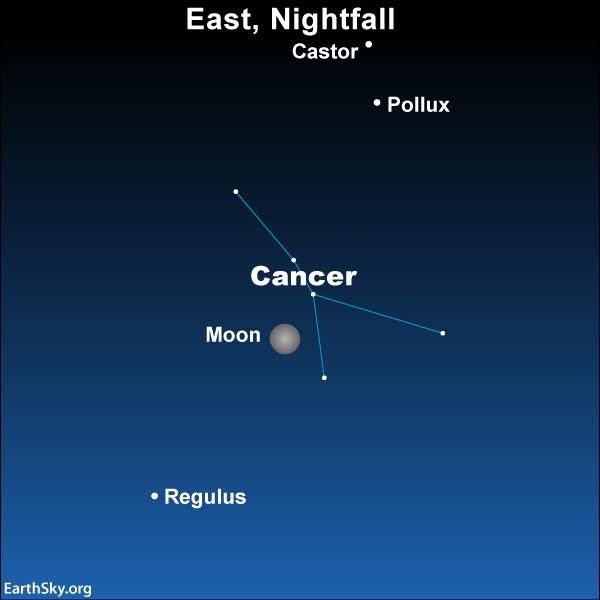 On February 27, 2018, the almost-full waxing gibbous moon puts the constellation Cancer in the spotlight, but out of view. Demure Cancer the Crab is the faintest of the constellations of the zodiac. You can see Cancer only on dark, moonless nights.

The starry sky is like a great big connect-the-dots book, enabling stargazers to star-hop from brighter stars to more obscure nighttime treasures. And that’s why noticing the stars around the February 27, 2018, moon can be helpful. By around the end of the first week of March, when the moon drops out of the evening sky, Cancer the Crab will be showing its delicate starlit figurine in the region of sky in between the Leo star Regulus and the Gemini stars Castor and Pollux.

Our featured chart at top shows the moon and Cancer for North American mid-northern latitudes. At nightfall, at mid-northern latitudes from around the world, the stars and planets are similarly positioned. As seen from Europe and Asia, though, the moon on February 27, 2018, is offset toward the Gemini stars, Castor and Pollux. This difference in the moon’s position, relative to the backdrop stars of the zodiac, is due to the moon’s own motion in orbit around Earth.

From the Southern Hemisphere, the differences are due in part to the moon’s movement, and in part to the difference in perspective from one hemisphere to the other. Still, we all live under the same sky, and no matter where you live worldwide, the moon beams in the vicinity of Cancer tonight, with the moon sandwiched in between Castor and Pollux on one side and the star Regulus on the other.

Just remember – although we outline Cancer for you on our chart, you’re not likely to see this constellation in the drenching moonlight on February 27. Notice the stars around it, and come back in 10 days so to find the faint Crab when the moon has moved on its way – and left the evening sky dark for stargazing.

Bottom line: The almost-full moon puts the constellation Cancer the Crab in the spotlight – but out of view – on the night of February 27, 2018.

Thank you! Your submission has been received!
Oops! Something went wrong while submitting the form.
END_OF_DOCUMENT_TOKEN_TO_BE_REPLACED