A new study reveals that the illegal harvesting and trading of Southeast Asian monitor lizards – valued for their skins and as pets – continues.

A team of German and Indonesian scientists recently published the first comprehensive study on the conservation and threatened status of all Southeast Asian species of monitor lizards. The authors conclude that several of these fascinating giant lizard species are obviously being exploited at unsustainable levels, even though national and international regulations and laws are in place. This critical study was published in the well-known online journal “Herpetological Conservation and Biology”.

Besides the demand for the pet trade (where particular species are targeted), the commercial trade in skins must be understood as a major threat for some species and populations. Next to crocodilians and giant snakes, monitor lizards are the species group of lizards that are exploited most frequently within the skin trade. Annually, Indonesia documents the legal export of 450,000 skins of the water monitor lizard (Varanus salvator) for the manufacture of e.g. handbags and watch straps, the latter of these then being marketed in Germany as “lizard straps”. Dr. Andre Koch of the Zoological Research Museum Alexander Koenig in Bonn has strong reservations and states: “Especially, the poorly monitored trade in island species and populations must be feared detrimentally, if current trade levels continue; here over-exploitation and extinction are closely linked.” Since many years, and alike his co-authors, Dr. Koch is engaged in research on the monitor lizards of Southeast Asia specifically regarding their underestimated diversity, their distribution and their phylogenetic relationships. 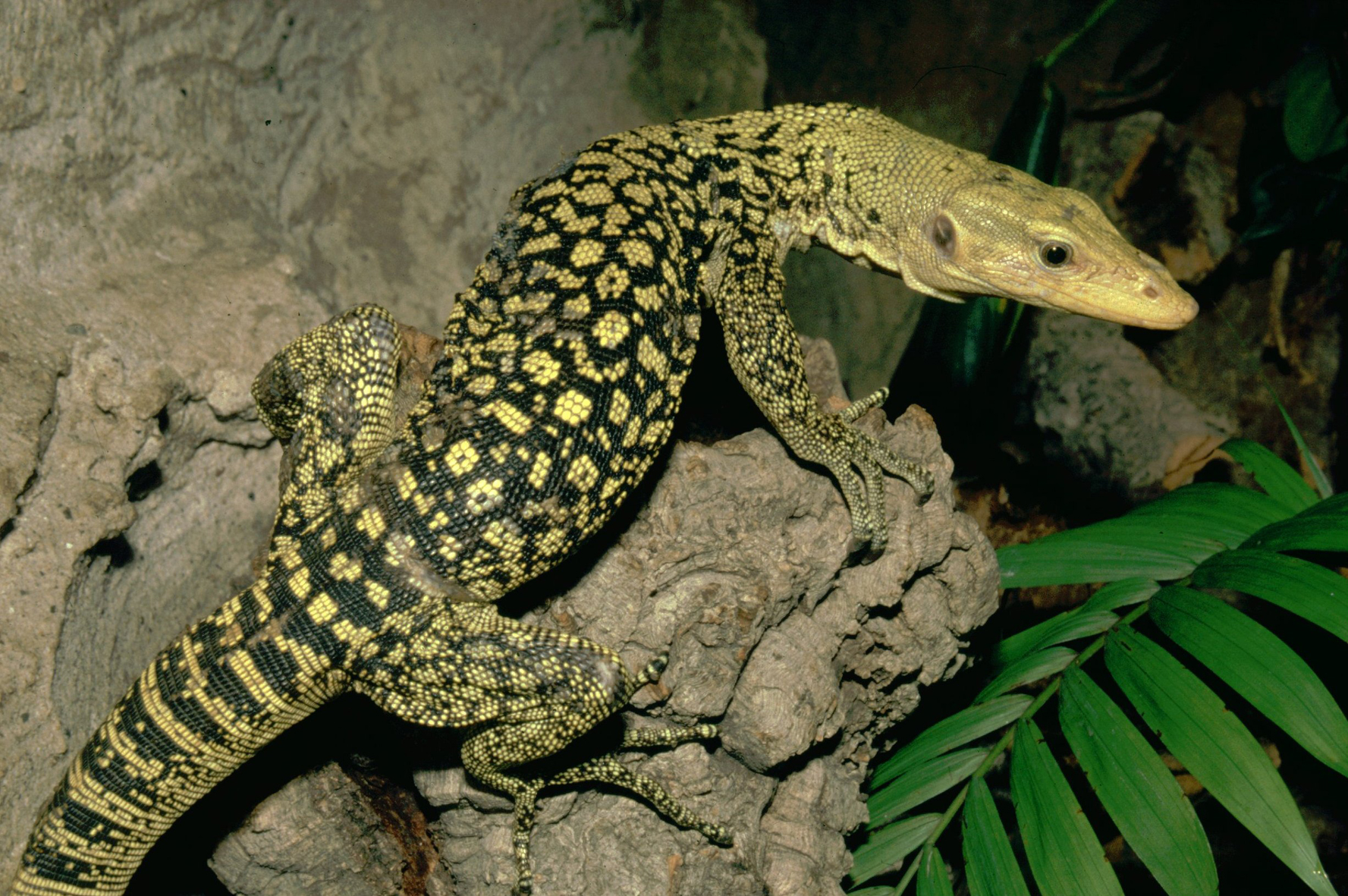 View Larger | The Quince Monitor (Varanus melinus) from the Moluccas was described by the researchers of the Museum Koenig in 1997. Due to its colourfulness, this monitor lizard is a target species of the international pet trade. Photo: Thomas Ziegler

In 2010, for instance, the reptile experts from Bonn were able to identify three new species of monitor lizards of the Philippines. “These are only the last spectacular new discoveries of large-bodied monitor species.” explains Prof. Dr. Wolfgang Böhme, senior herpetologist and former Vice-director of the Zoological Research Museum Alexander Koenig in Bonn. He further states, that “Since the 1990s we described more than 10 new species from Southeast Asia and New Guinea. Among these were the eye-catching Quince monitor lizard described from the Moluccas in 1997 and a strikingly blue-coloured tree monitor lizard discovered in 2001. Latter species is restricted to little Batanta Island offshore north-western New Guinea. This island has a size of only 450 km2, which is comparable with Lake Constance.”

The Monitor Lizards’ demise is a combination of several factors

“No doubt, the tree monitor lizards of New Guinea belong to the most colourful reptiles”, emphasizes PD Dr. Thomas Ziegler, Curator of the Aquarium and Coordinator of the Cologne Zoo, who is strongly engaged in species conservation issues in Vietnam. He adds: “In zoos, monitor lizards can serve as flagship species for the conservation of their kind. Within breeding programs, zoos also have the chance to build up captive populations of species with very limited distribution ranges. Here, the Cologne Zoo engages since years, also supported by the World Association of Zoos and Aquaria (WAZA), in the research and breeding of only barely known and threatened monitor lizard species. Only recently, the world’s first F2 (i.e., second generation) breeding of the Quince Monitor Lizard succeeded at Cologne Zoo.” Dr. Mark Auliya, Helmholtz Centre for Environmental Conservation (UFZ) in Leipzig, and senior author of the study is an expert on reptile trade and conservation issues in Southeast Asia, further notes: “It is their colourfulness, their rarity value and strong protection status that drives the demand. Quite often four-digit amounts are paid, for pairs occasionally even five-digit sums. Even the large Komodo dragons are illegally traded, although international trade regulations under CITES (Convention on International Trade in Endangered Species of Wild Fauna and Flora) do not permit commercial trade of wild specimens of this species.”
Apart from trade, monitor lizards native to Southeast Asia also encounter other human imposed threats. Local conflicts arise when certain species are found to have killed domestic fowl. Further, road kills are common in certain regions, and some species are even targeted for bush meat. 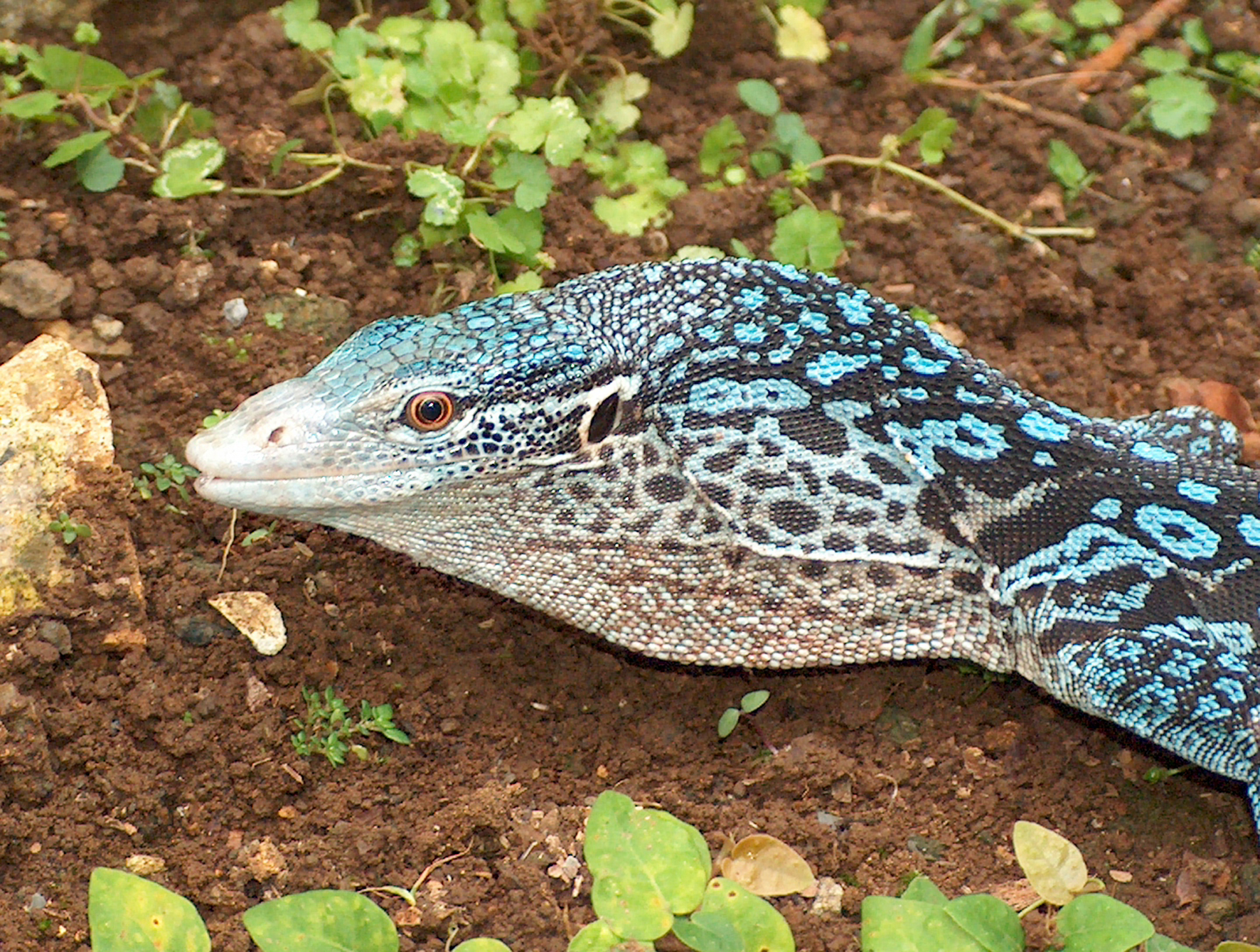 View Larger | The strikingly blue-coloured tree monitor species Varanus macraei belongs to the most magnificent reptiles of the world. This rare monitor species was discovered in 2001. It is highly threatened and restricted to the little Indonesian Island of Batanta offshore New Guinea. This island has a size of only 450 km2, which is comparable with Lake Constance. Photo: André Koch

An Identification Key to help control the international trade

Although all monitor lizard species are protected under CITES, annual off-take levels are not adequately monitored, and not all species are traded on the basis of annual released harvest and export quotas. Sound knowledge on monitor species is commonly not available among responsible authorities. “For that reason, we created a comprehensive identification key of all monitor lizard species of the study region including many photographs. This key shall assist the management authorities and customs to improve the enforcement of current legislations in order to warrant sustainable conservation of Indonesian monitor lizards”, states Dr. Evy Arida from the Indonesian National Natural History Museum near Jakarta, who also co-authored this study. 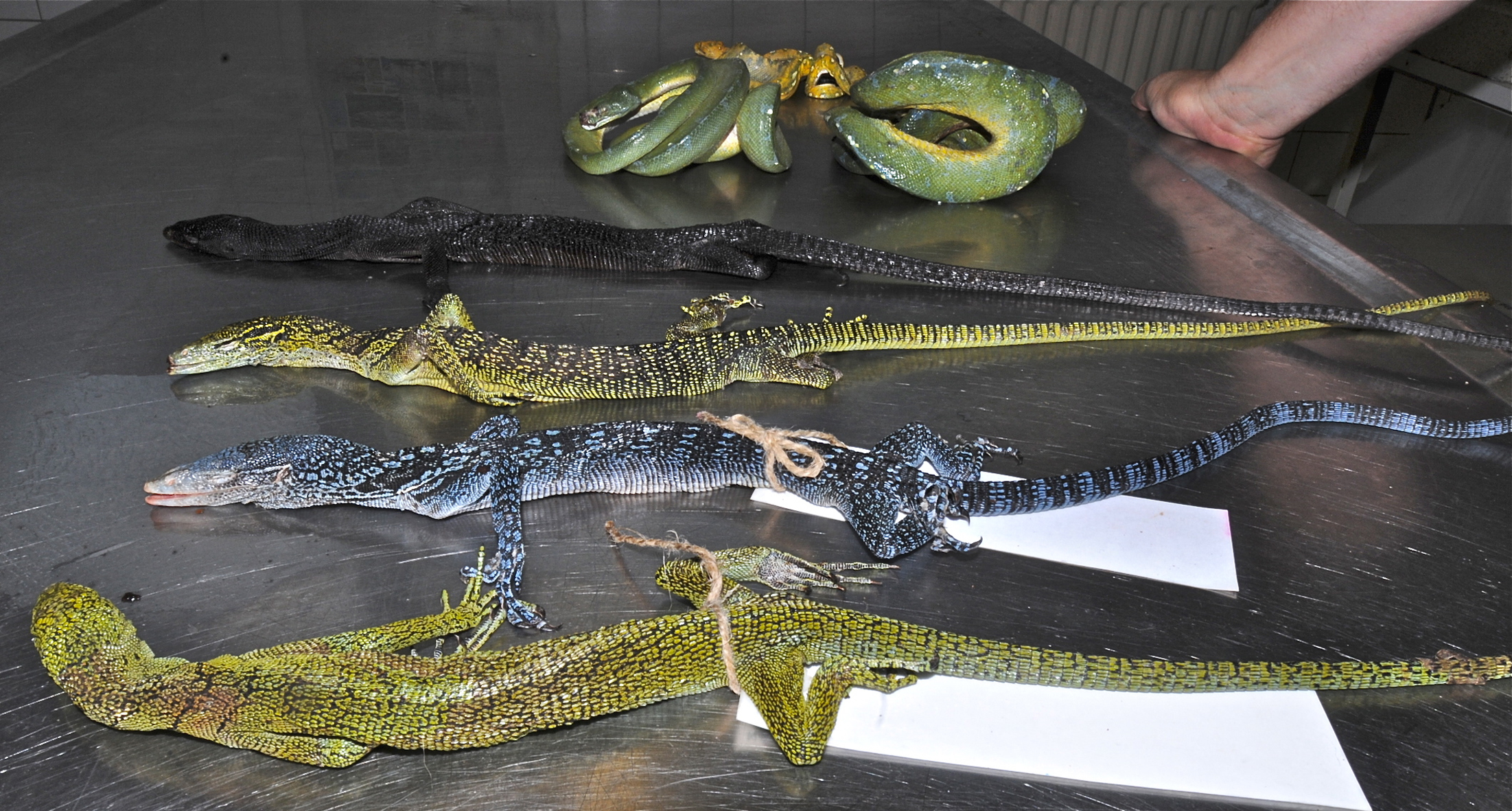 Two thirds of all captured reptiles meant for the pet trade do not enter the trade chain because they perish earlier under cruel conditions at the first collecting points along these trade routes. Photo: Mark Auliya

Southeast Asia and New Guinea as a diversity centre of the world’s monitor lizard species
Southeast Asia including New Guinea represents the global centre of monitor lizard diversity with currently 44 described species. Although other reptile groups, such as skinks and geckos, largely exceed monitor lizard diversity in this region (Indonesia represents one of 17 megadiversity countries worldwide and harbours more than 700 reptile species!), the giant lizards occupy the end of the food chain. Particularly New Guinea, the world’s second largest island, still possesses wide untouched rain forests and harbours the highest monitor lizard diversity in Southeast Asia. Dr. Auliya, who visited the Indonesian part of the island in 2011, reports on a recent study of Australian colleagues, who demonstrated that approximately only one third of all captured reptiles meant for the pet trade do actually enter the trade chain. The remainder perishes mostly under cruel conditions at the first collecting points along these trade routes. “Consumers should be aware of their responsibility in purchasing wild captured reptiles. Therefore, captive-bred specimens from reliable sources must always be favoured and also strongly promoted.” as Dr. Auliya notes.

All in all, the authors of the new study are strongly in favour of a revision of the current export quotas of some species and the establishment of quotas for those species, which have not been assessed yet. In addition, the scientists advocate stricter compliance with all legislative regulations as well as improved and regular trainings for the relevant authorities to minimize and prevent illegal trade activities. Moreover, no population trend studies exist of any monitor lizard species, which are exploited for commercial purposes. This could have fatal consequences for some sought-after species!