Venus brightest in mid-February for all of 2014

What’s that very bright star or planet in the east before sunrise now? It’s the planet Venus, now near its time of greatest brilliancy.

Have you seen the brilliant object shining in the east before sunrise now? It’s the beautiful morning “star,” really the planet Venus, brightest planet ever seen in Earth’s sky. Venus is the second planet outward from our sun. It’s always the third-brightest object in Earth’s sky, after the sun and moon. Right now, though – around mid-February 2014 – Venus is at its brightest. It is at what astronomers call its greatest illuminated extent or greatest brilliancy, which peaks on February 15, but which is noticeable for many weeks around mid-February 2014. Follow the links below to learn more about Venus at its brightest.

When can I see Venus?

How bright is Venus?

Why is Venus at its brightest now?

Venus in front of the Milky Way, rising over the eastern horizon before sunrise on February 8, 2013, as seen from Pemaquid Point Lighthouse in Bristol, Maine by Mike Taylor. Visit Taylor Photography. 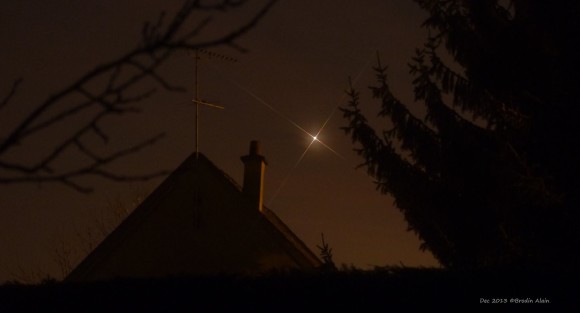 When can I see Venus? You can’t miss Venus if you look outside before the sun comes up. Look in the same direction as the sunrise. Venus will be shining there – looming there, actually – a bright and somewhat eerie-looking object.

Venus always looks a bit eerie around its time of greatest brilliancy. At these times, many people report Venus as a UFO. Plus, there are multiple stories in military history about people mistaking Venus for an enemy spy balloon, and trying to shoot it down. 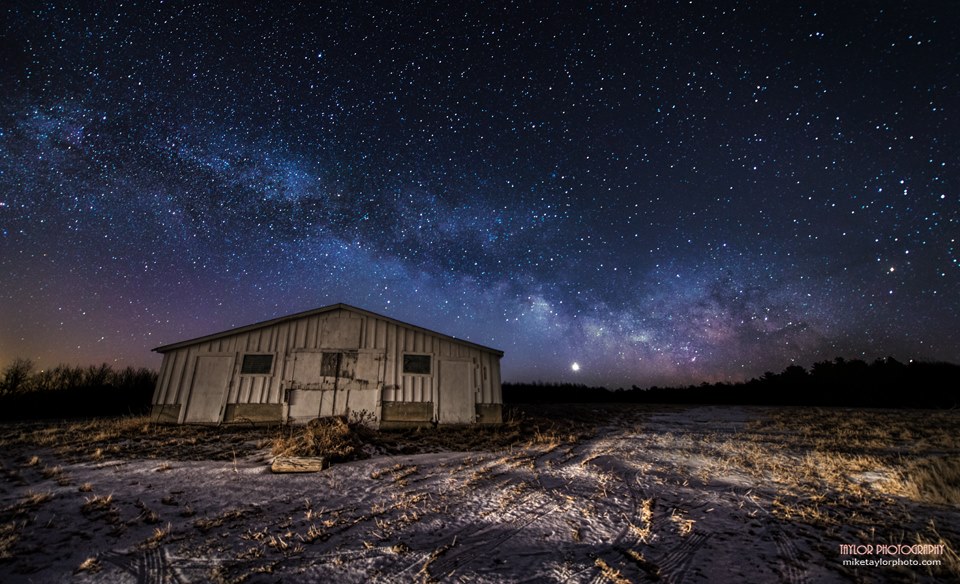 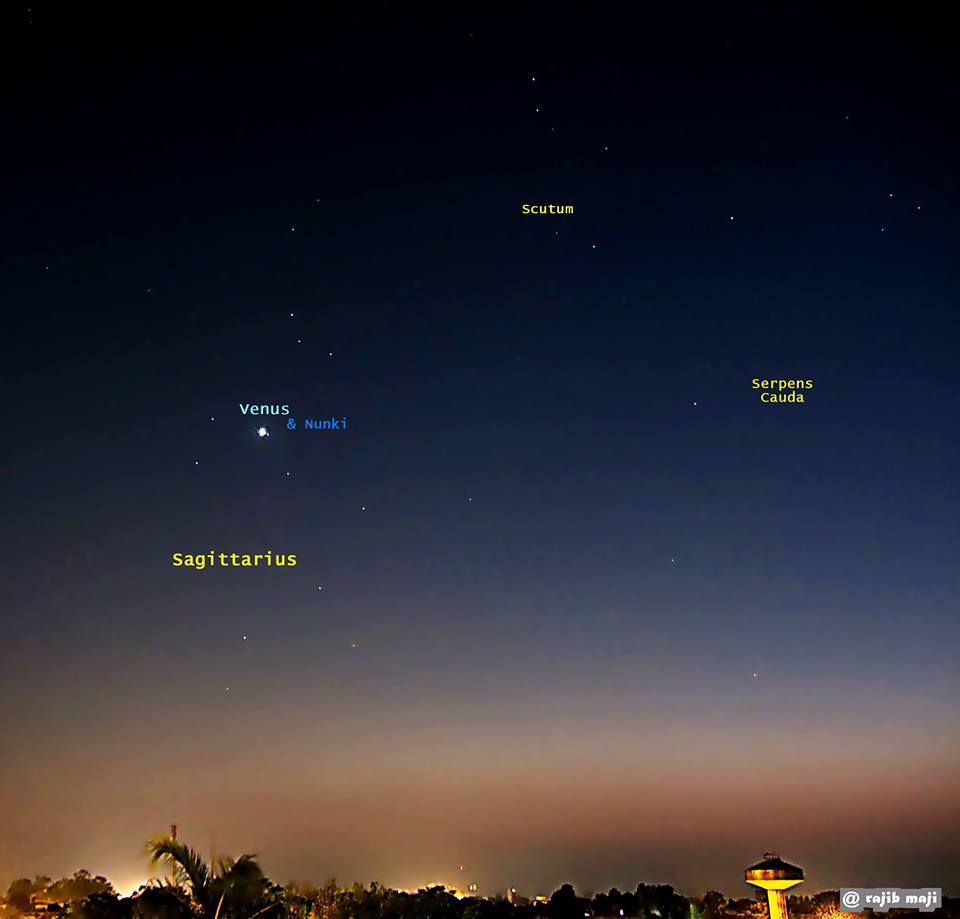 Venus easily outshines any nearby stars. Here is Venus in November 2013, when it was near the star Nunki, in the constellation Sagittarius. Photo taken November 19, 2013 by EarthSky Facebook friend Rajib Maji in India. Thank you, Rajib!

How bright is Venus? Venus easily ranks as the brightest starlike object in all the heavens.

This planet ranges in magnitude from -3.9 to -4.9. A negative magnitude means an exceptionally bright celestial object. Our sun, for example, has a magnitude of -26!

Or contrast the brightness of Venus to the very brightest stars. Consider the well-known star Betelgeuse in the constellation Orion, which shines at a magnitude of 0.45. At its faintest, Venus shines nearly 40 times brighter than Betelgeuse. At its brightest, Venus is about 100 times brighter.

Venus waxes and wanes in phase, and the size of its disk increases and shrinks, depending on where Earth and Venus are in orbit. As Venus comes closer to Earth, its phase shrinks but its disk size enlarges. Image via Statis Kalyvis

Why is Venus at its brightest now? Consider that Venus is a planet, like Earth, in orbit around the sun. Its orbit is inside ours; Venus is closer to the sun.

That’s why this dazzling world displays the full range of phases, much like our moon. You need a telescope to observe the phases of Venus, and they are most fun to watch around the time that Venus passes between us and the sun. Around then, the lighted half or day side of Venus is facing mostly away from us. Venus appears in a crescent phase.

Believe it or not, Venus doesn’t exhibit its greatest brilliancy at the full phase. In order to see Venus as full, that planet must be far across the solar system from us, and, at such times, the size of its disk is small. So Venus appears fainter then.

Likewise, Venus doesn’t shine at greatest brilliancy when it’s closest to Earth. Then the planet is either an extremely thin crescent as seen from Earth, or it’s not visible at all because its day side faces entirely away from us and it’s in the sun’s glare. 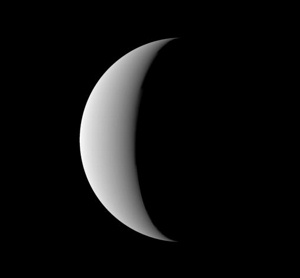 This is an illustration, showing the phase of Venus at greatest brilliancy, or greatest illuminated extent, on February 15, 2014. It always happens when we are seeing about 25% of the day side of Venus. Image via US Naval Observatory

Here’s the secret to Venus at its brightest: Venus reaches its greatest illuminated extent when the planet’s illuminated portion or day side covers the greatest square area of sky.

That happens when Venus’ disk is about one-quarter (25%) illuminated by sunlight, as shown in the image at right.

So watch for Venus. It’s bright and beautiful around now. People from across the globe will be gazing in wonder at it, asking what it is, and you can tell them! 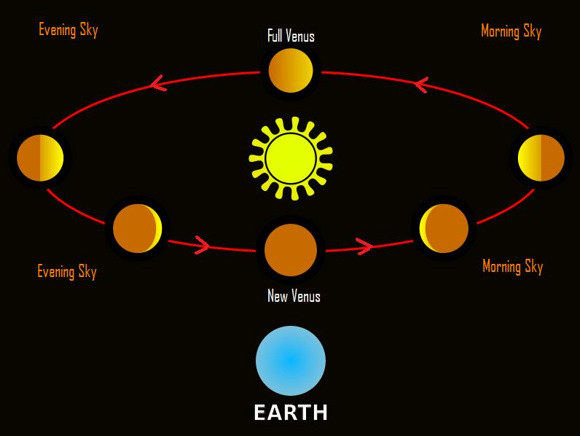 As seen from Earth, Venus shows phases, much like the moon. That’s because Venus orbits closer to the sun than Earth does. Sometimes we see its fully lighted day side, and sometimes we see only a fraction of the day side. Venus transitions to the morning sky at new phase and into the evening sky at full phase. Venus and all the solar system planets go counterclockwise around the sun as seen from the north side of the solar system plane, as in this diagram.

Bottom line: What’s that very bright star or planet in the east before sunrise around mid-February 2014? It’s the planet Venus, now near its time of greatest brilliancy.