What’s the birthstone for October?

If you were born in October, your birth month has 2 birthstones: opal and tourmaline.

Opal
The opal is a fragile hydrated silica material, made of submicroscopic silica spheres held together by more silica and water. It is a soft stone, easily altered in appearance by changes in heat and pressure. This mineral contains varying amounts of water within it that determine the appearance of the gemstone. When water evaporates out of an opal, the stone appears slightly smaller and the stress of the evaporation creates cracks on it.

Opals are formed in near-surface volcanic rocks, within cavities and cracks. In sedimentary volcanic ash rock, percolating water in the ground dissolves silica that eventually precipitates to form the opal, sometimes becoming the replacement material for fossils – shells, bones, wood – whose original material had dissolved away. 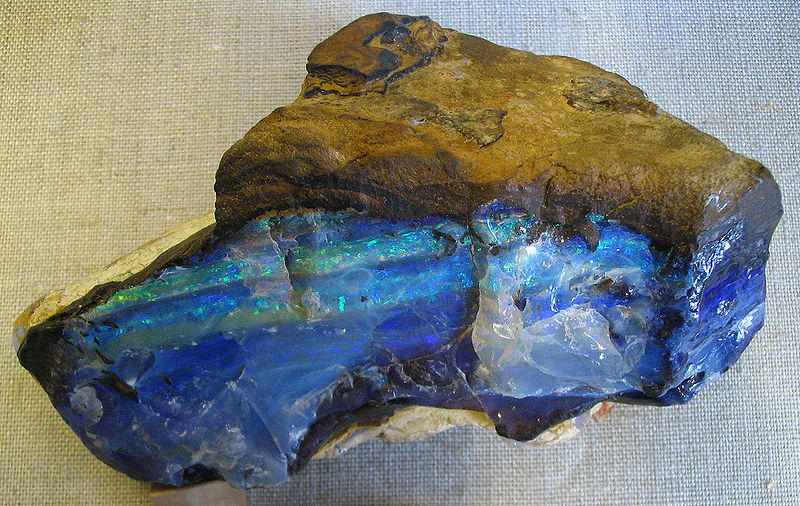 Opals are famous for their “play of colors” – many stones flash the colors of the rainbow when moved, due to the interference of light on small cracks and other internal structural differences. Opals also have characteristic colors due to impurities within the stone. The milky or pearly appearance of some opals is due to inclusions of tiny gas bubbles. Yellows and reds betray the presence of iron oxides. The spectacular black opals that sometimes flash green, blue and red get their color from magnesium oxides and organic carbon within the stone. Perhaps the most valuable opal pattern is the “harlequin,” large angular patches of red, yellow and green resembling the checks on a clown’s costume.

The principal source of opals is Australia, noted for its magnificent black opals. Fire opals were first mined in Mexico, and continue to be produced there today. In the United States, brilliant fire opals are found in Nevada. Other commercial sources of opal are Brazil, Honduras, Nicaragua, Guatemala, Japan and Ireland.

The name opal is derived from the Sanskrit word “upala,” as well as the Latin “opalus,” meaning “precious stone.” Opal is a gemstone of much variety; the ancient Roman natural historian Pliny once described it in the following way:

It is made up of the glories of the most precious stones. To describe it is a matter of inexpressive difficulty: There is in it the gentler fire of the ruby, the brilliant purple of the amethyst, the sea-green of the emerald, all shining together in an incredible union.

There is an Indian legend about the origin of the opal. Quoted from “Gemstones” by Willard Heaps:

The gods Brahma, Vishnu and Shiva once vied in jealous love for a beautiful woman. This angered the Eternal, who changed the fair mortal into a creature made of mist. Thereupon each of the three gods endowed her with his own color so as to be able to recognize her. Brahma gave her the glorious blue of the heavens, Vishnu enriched her with the splendor of gold, and Shiva lent her his flaming red. But all this was in vain, since the lovely phantom was whisked away by the winds. Finally, the Eternal took pity on her and transformed her into a stone, the opal, that sparkles in all the colors of the rainbow.

To ancient Romans, the opal was a symbol of love and hope. Asians called it the “anchor of hope.” Arabs say it fell from the heavens in flashes of lightning. It was believed to make its wearer invisible, hence the opal was the talisman of thieves and spies.

During the Medieval period, a change in color intensity of an opal was believed to indicate if its wearer was ill or in good health. The opal was supposed to maintain a strong heart, prevent fainting, protect against infection and cleanse foul-smelling air. The stone, as in ancient times, was still regarded as a symbol of hope.

But the opal’s reputation changed in the mid-14th century. The Black Death swept across Europe, killing one quarter of its population. The gem was believed to be the cause of death. When worn by someone struck with the deadly plague, it would appear brilliant only until the person died. Then it would change in appearance, losing its luster. In reality, it was the sensitivity of this stone to changes in temperature that altered its appearance, as the heat from a burning fever gave way to the chill of death.

In Elizabethan England, the opal was treasured for its beauty. Shakespeare wrote of it in “Twelfth Night” as the “queen of gems.” Queen Victoria presented her children with opal jewelry, thus making the the stone popular. But the stone continued to have a mixed reputation, chiefly due to a novel written by Sir Walter Scott in 1887 that depicted it as a stone of evil.

In Australia, there is a legend of a huge opal that governs the stars and guides human love, as well as controls the gold in mines. But Australian Aborigines see it in a different light: to them, the opal is the devil that lurks in the ground, a half-serpent and half-human with flashes of wicked magic that lure men to destruction.

Tourmaline
The alternate birthstone for October is the tourmaline, a gemstone that exhibits the broadest spectrum of gemstone colors. Gem-quality forms of this mineral have in the past been misidentified as rubies, emeralds and sapphires. In fact, a famous tourmaline – the size of a pigeon’s egg – belonging to the Russian empress Catherine the Great was long thought to be a ruby. The name of this gemstone is believed to derive from the Singhalese (Sri Lankan) word “toramalli,” a term applied to yellow, green or brown stones, that means “something little out of the earth.”

Tourmaline is a complex aluminous borosilicate mineral built of crystals with complicated aggregations of sodium, aluminum, boron, oxygen, hydrogen and silicon atoms. Other metals are also present within the crystal structure, and are responsible for the characteristic colors of the gemstones. Pink, for example, is due to the presence of manganese, while ferrous iron, chromium or vanadium betray their presence as green gemstones.

Most tourmalines are found in a myriad of colors: yellow, green, red, blue, pink, brown, black. Some even have bi-colored properties. A valued bi-colored variety of tourmaline, found in Brazil, is called the “watermelon.” The outer edges of the gem are green, transitioning to a transparent white zone that gives way to a pink or light red interior. 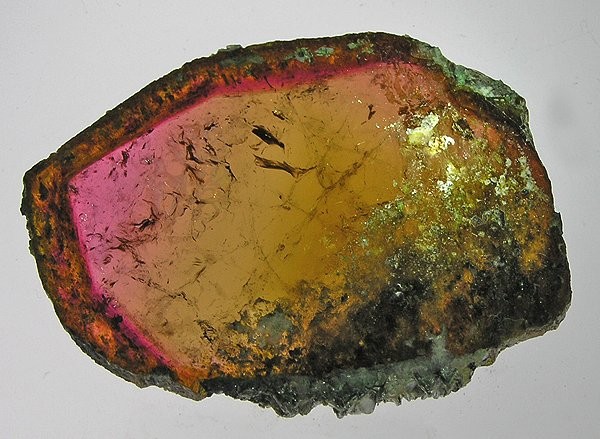 Tourmaline has an unusual property. When it is warmed or rubbed, it attracts small bits of paper, lint and ash. This occurs because the gem becomes charged with static electricity. In fact, Benjamin Franklin used this gem in his studies of electricity. Maintaining a tourmaline exhibit at museums requires frequent cleaning of the gemstone because heat from lights of the display case create a charge in the stone that attracts dust.

Compared with other gemstones, tourmalines are a relatively recent discovery. Hence, it lacks the rich lore that accompanies many other precious gems. However, among some people, the stone is known as the “peace stone,” believed to dispel fear and make its wearer calm.

Find out about the birthstones for the other months of the year:

Bottom line: The birthstones for the month of October are opal and tourmaline.