January’s birthstone is the garnet

Happy birthday, January babies!  Your birthstone is the garnet.

The birthstone for January is the garnet.

The name “garnet” is derived from the Latin “granatum” meaning “pomegranate” because the crystals resemble the pomegranate’s red, round edible seeds. Most people think of the garnet as a red gemstone, but in fact, it exists in all kinds of colors – such as black – as well as many shades of red and green. It can even be colorless. The garnet’s variety of colors comes from metals such as manganese, iron, calcium, and aluminum. Some varieties even contain mineral fibers that produce the illusion of a four- or six-rayed star within the stone. Green garnets are most highly prized but are very rare. Emerald green and colorless stones are highly valued, followed by pure red garnets. 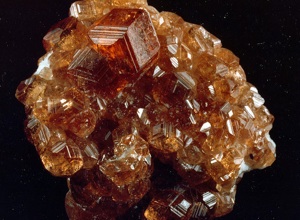 Garnets are commonly found as small pebbles in streams, where the igneous and metamorphic rocks that contain them have weathered away. They’re found in many places around the world, including North and South America, Australia, India, Asia and Spain.

Ancient warriors believed that garnets brought victory. The Crusaders used them as protection against wounds and accidents during their journeys. In contrast, Asian warriors believed that glowing garnets, used as bullets, inflicted more severe wounds. In 1892, during hostilities on the Kashmir frontier, the Hanza tribesmen fired on British soldiers with garnet bullets, believing them to be more effective than lead bullets.

In the former Czechoslovakia, evidence of garnet jewelry dating to the Bronze Age was found in ancient graves. Garnet jewelry has also been discovered dating back to 3100 B.C. in Egypt, 2300 B.C. in Sumeria, and 2000-1000 B.C. in Sweden. Garnets were treasured in 3rd and 4th century Greece, and continued in popularity during Roman times. Across the Atlantic, pre-Columbian Aztecs and Native Americans also used garnets in their ornaments.

As with many precious stones, garnets were once believed to hold medicinal powers. In medieval times, it protected its wearer against poisons, wounds and bad dreams, and cured depression. Red garnets relieved fever, hemorrhages and inflammatory diseases.

Bottom line: If you were born in January, your birthstone is the garnet.