April’s birthstone is the diamond

Happy birthday, April babies! Your birthstone, the diamond, is the rich cousin of graphite.

April’s birthstone is the diamond.

Diamonds are the rich cousins of graphite. Both are crystalline forms of pure carbon. The enormous differences in their properties are a result of the way the carbon atoms are bonded together. In graphite, carbon atoms are arranged in sheets that easily slide past each other, which makes graphite ideal as a lubricant and, of course, as pencil lead. Diamond crystals, on the other hand, are a tight-fisted network of carbon atoms securely held in four directions, making it the hardest naturally-occurring substance in the world.

In order to achieve such a compact and strongly-held network of carbon atoms, it is believed that diamonds must have crystallized deep under the Earth’s surface. At these depths the proper conditions for the formation of diamonds exist; at 90 to 120 miles deep, pressures are more than 65,000 times that of the atmosphere at the Earth’s surface, with temperatures exceeding 2,700 degrees Fahrenheit (1,500 degrees Celsius). Such pressures and temperatures reproduced in laboratories have successfully yielded synthetic diamonds.

There are many kinds of diamonds: transparent, translucent, or opaque; ranging from colorless to sooty black, with many colors in between. Mostly transparent diamonds, colorless or tinted, are used as jewelry. Others are used widely in industry. The color of a diamond depends on the kind of impurities embedded inside it. Yellow diamonds, for example, betray minute quantities of nitrogen, while boron imparts a bluish hue. There are other inclusions in diamonds that have great scientific value. Such samples are time capsules that yield valuable information about conditions deep in the Earth’s upper mantle where diamonds formed, as well as clues to the formation and age of the diamond.

Diamonds are found in alluvial deposits – gravel swept by streams, rivers, glaciers and ocean currents. They are also found in sedimentary rock where gravel deposits and organic material have been compressed into rock. Diamonds can be found in some samples of kimberlite – a type of volcanic rock first identified in Kimberley, South Africa. Diamonds found in kimberlite are thought to be very old, perhaps as much as three billion years old. Tiny flecks of diamond have even been found inside meteorites – bits of rocky space debris that land on Earth.

Diamonds are crystals. Crystals are the ultimate form of symmetry in nature. Their shape reflects the internal orderly arrangement of atoms within the crystal. In diamonds, atoms of carbon are held tightly by covalent bonding, where two neighboring atoms share an electron, endowing the diamond crystal with great strength. But despite that hardness, diamonds can be cut with saws and polished with grinding wheels coated with tiny industrial diamond fragments. In their natural form, diamonds can appear quite unimpressive. They are cut and polished by skilled craftsmen in a pattern that reflects and refracts the light among its facets to reveal the hidden beauty of the stone.

Diamonds’ cold, sparkling fire has held us spellbound for centuries, inspiring rich, passionate myths of romance, intrigue, power, greed and magic. Ancient Hindus, finding diamonds washed out of the ground after thunderstorms, believed they were created by bolts of lightning. In our place and time, the diamond is a symbol of enduring love, and often graces engagement rings. 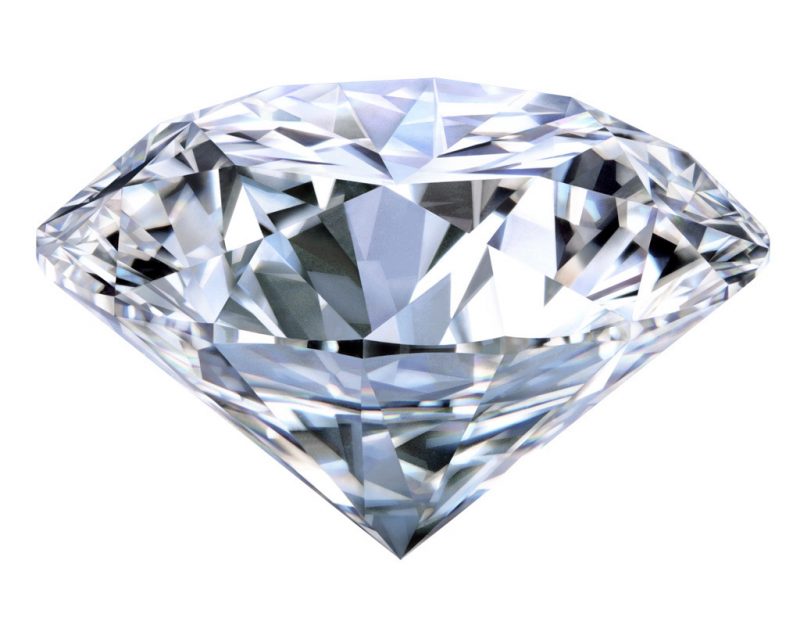 A single large diamond, with facets cut to maximally reflect and refract light.

Some diamonds seem to have lived lives of their own. One legendary stone in the diamond hall of fame is the Koh-i-noor (“Mountain of Light”). The Koh-i-noor diamond’s early history is shrouded in time. It is believed to be 5,000 years old, and was featured in the great Sanskrit epic The Mahabharata. Originally owned by the Rajah of Malwa in India, the Koh-i-noor has since been a player in victories and defeats spanning India, Persia and Afghanistan. It was in the possession of the great Mogul dynasty from 1526 to 1739. Its owners included Shah Jehan, who built the Taj Mahal in memory of his queen Mumtaz. The Persian invader Nadir Shah briefly possessed it until his assassination in 1747. The jewel then fell into the hands of Afghan rulers who eventually surrendered it to the Rajah of Punjab, Ranjit Singh.

Two years after Ranjit Singh’s death in 1839, Punjab became part of India under British rule. The stone was presented to Queen Victoria, who had it cut from its original 187 carats to 108 carats in an attempt to further enhance its beauty. After her death, the diamond became part of the British crown jewels. Queen Elizabeth (later the Queen Mother) wore it in her crown at her 1937 coronation.