Should we ever adopt the International Fixed Calendar, we’d have 13 months in a year, with each month containing a Friday the 13th. Friggatriskaidekaphobia – aka fear of Friday the 13th – would be rampant! Or not. Read more about this calendar system here.

A month is based loosely on the cycle of the moon. Image via Tomruen/Wikimedia Commons.

The month, of course, is an arbitrary concept, based loosely on the cycle of Earth’s companion moon. Months can be, and have been, many different lengths. In contrast to the Gregorian calendar, an International Fixed Calendar would be composed of 13 months, each of which would have 28 days (for a total of 364 days). With the International Fixed Calendar, weekday names would fall on the same dates each and every month. If your birthday was on a Monday one year, it’d be on a Monday every year. What this calendar system calls its Year Day would be a special day, existing outside of any week, inserted in between Saturday, December 28, and Sunday, January 1. Because Year Day would exist outside of any week or year, it’d be a holiday with no weekday name … to be celebrated as “a day out of time.”

Of course, in a 13-month calendar system, we’d also have a new additional month. The International Fixed Calendar system calls this extra month Sol and requires that it fit between the months of June and July.

And what about leap years in the International Fixed Calendar? In a leap of year of 366 days, Leap Day would come one day after Saturday, June 28, and one day before Sunday, Sol 1. Like Year Day, Leap Day would reside outside of any week and therefore would have no weekday name.

Every month in the 13-month calendar would harbor 28 days, with each month showcasing a Friday the 13th. Image via Wikipedia.

How likely are we to adopt the International Fixed Calendar? Not very likely. According to an article from Bloomberg/a>:

Momentum behind the International Fixed Calendar, a 13-month calendar with 28 days in each month and a leftover day at the end of each year (it also followed the Gregorian rules with regards to Leap Years), was never stronger than in the late 1920s.

Read more from Bloomberg CityLab: The death and life of the 13-month calendar 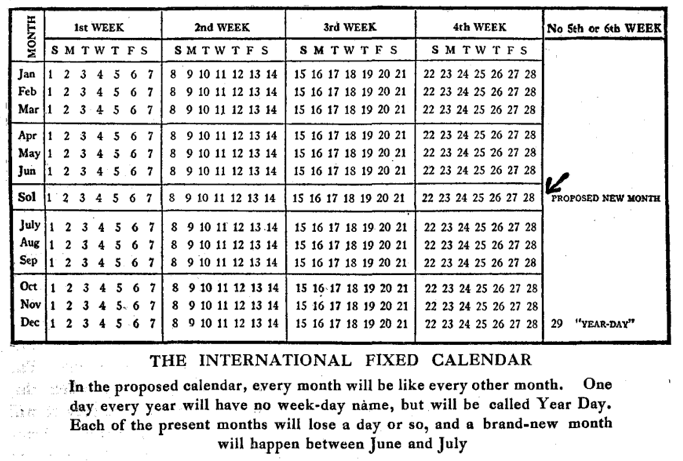 The International Fixed Calendar of 13 months containing 28 days each. Note that all 13 months start on a Sunday and have a Friday the 13th. Illustration via CityLab.

Still, some people claim the 13-month calendar better synchronizes solar and lunar cycles, because the moon travels full circle in front of the constellations of the zodiac in about 27.3 days. This 27.3-day period is known as the sidereal month. Also, since the 28-day month corresponds to the mean length of the female menstrual cycle, the 13-month calendar is sometimes regarded as a feminine calendar.

On the other hand – still speaking of nature’s cycles here – the lunar (or synodic) month, which is based on the moon’s phases, lasts a solid two days longer than the 27.3-day sidereal month. The time period between successive full moons is about 29.5 days, which is about 1 1/2 days longer than the proposed 28-day calendar month.

So we’d lose our Blue Moons if we ever were to adopt the 13-month International Fixed Calendar. The second of two full moons in a single month is commonly called a Blue Moon. In this 13-month calendar, there wouldn’t be time in a single month for the moon to go from full, through all its phases, and back to full again.

In our Gregorian calendar, only the month of February can have no full moon. This last happened in February 2018, and will next happen 19 years later, in February 2037. 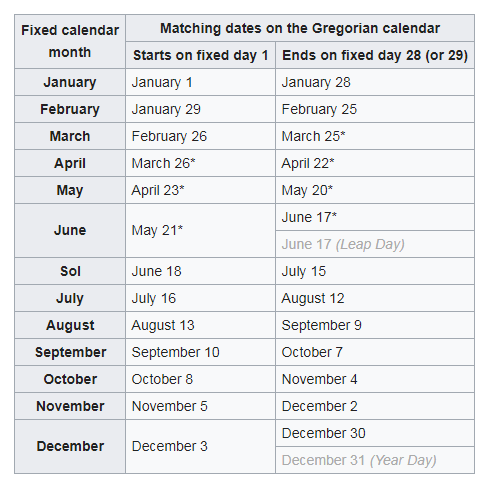 The Gregorian dates between March and June are a day earlier during a Gregorian leap year. Image via Wikipedia.