What is Earth’s shadow, and when can you see it?

Like all worlds orbiting suns, our planet Earth casts a shadow. Here are some times to look for it. 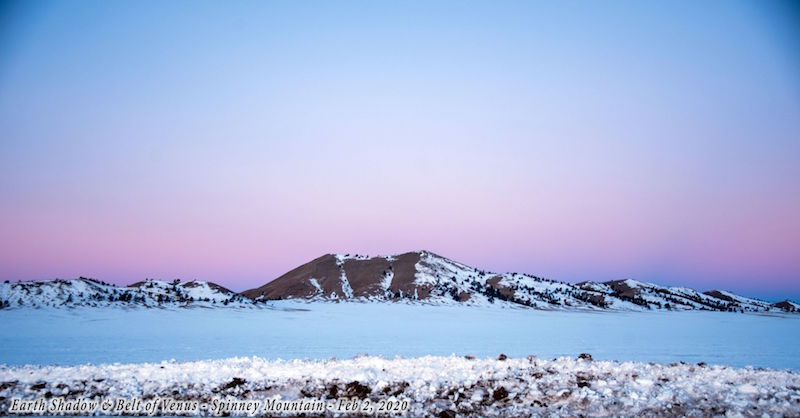 View at EarthSky Community Photos. | Stephanie Longo captured this image on the morning of February 2, 2020, at Eleven Mile Canyon State Park in Colorado. She said: “I was treated to a display of Earth’s shadow and the Belt of Venus over the Continental Divide. The mountains of the Divide were a little too far away for a quick shot and my fingers were painfully numb, so I decided on shooting this large hill named Spinney Mountain.”

Like all worlds orbiting a sun, Earth casts a shadow. Earth’s shadow extends about 870,000 miles (1.4 million km) into space. You might not realize it, but, from Earth’s surface, you can see the shadow. In fact, it’s easy to see, and you’ve probably already seen it, many times, as day changes to night.

That’s because night itself is a shadow. When night falls, you’re standing within the shadow of Earth.

The best time to watch for Earth’s shadow is when it’s creeping up on your part of Earth … Like all shadows, the shadow of Earth is always opposite the sun. So you’ll want to look eastward after sunset for the shadow (or westward before sunrise). 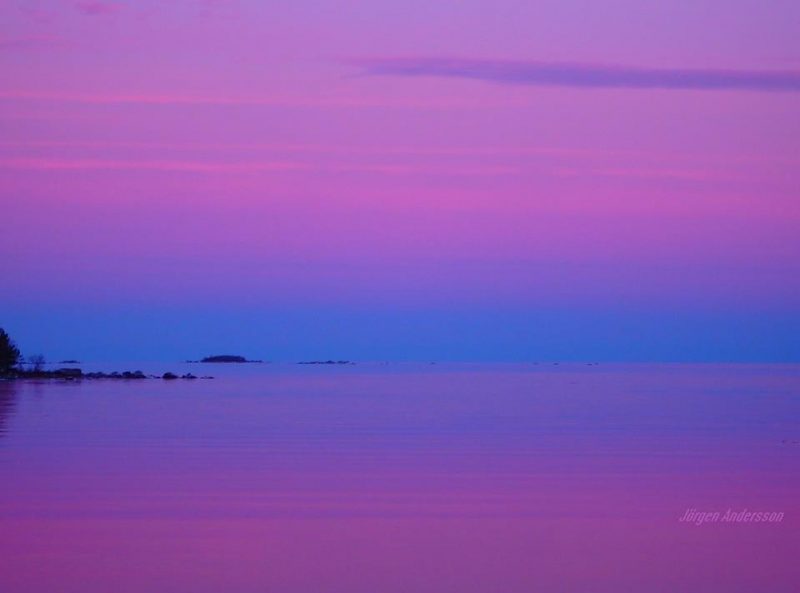 Earth’s shadow is the dark blue line above the horizon in this photo by Jörgen Andersson in Sweden. 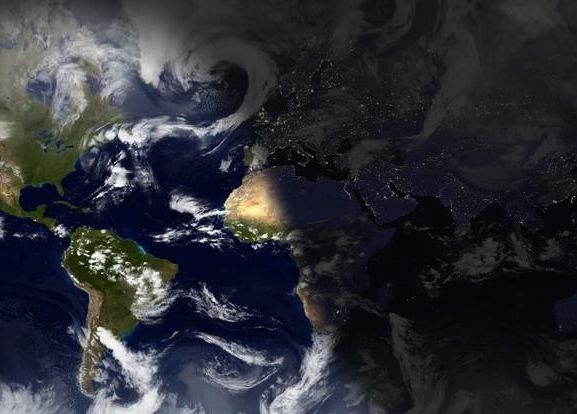 The shadow is a deep blue-grey, and it’s darker than the blue of the twilight sky. The pink band above the shadow is called the Belt of Venus.

The shadow of the Earth is big. You might have to turn your head this way and that – along the arc of the horizon opposite the sun – to see the whole thing. And, just so you’ll recognize it more easily, remember that the shadow is curved, in exactly the same way that the whole Earth is curved.

And, once you spot it, don’t go back inside just yet. Wait awhile, and watch Earth’s shadow ascending in the east at exactly the same rate that the sun is setting below your western horizon. 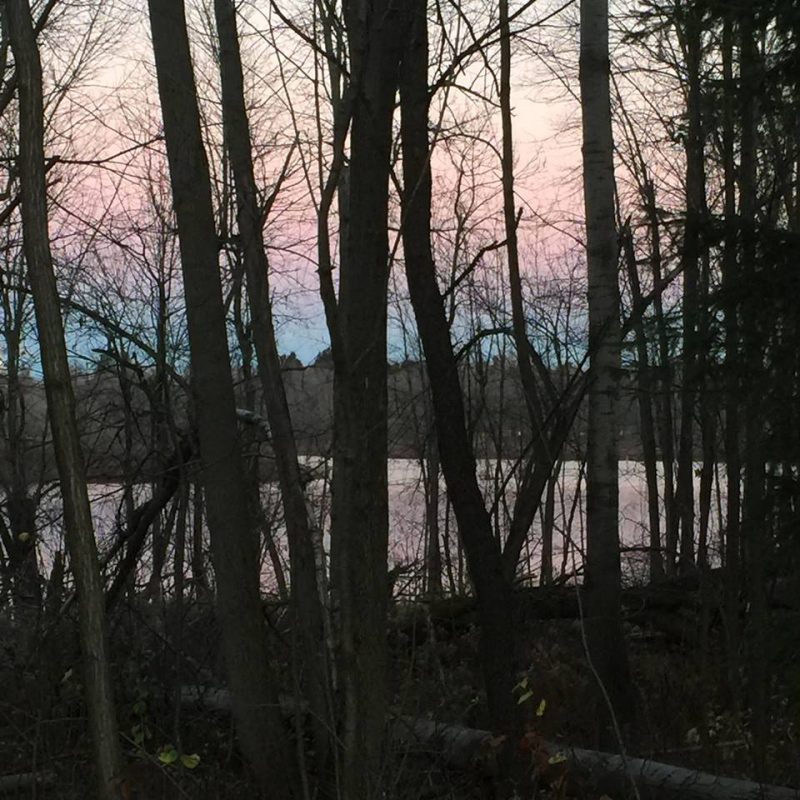 Earth’s shadow is the blue line near the horizon, behind the bare trees, in this November 2017 photo by Alice McClure. The pink band above the shadow is the Belt of Venus. 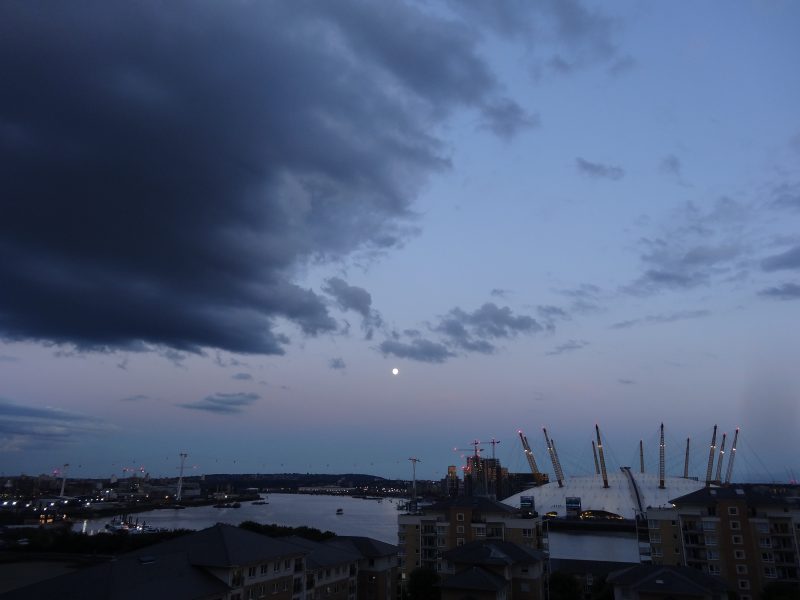 You don’t have to be in a country location to see Earth’s shadow. Sucheta Wipat caught the Earth’s shadow and Belt of Venus on a cloudy August evening in London.

Earth’s shadow extends so far into space that it can touch the moon. That’s what a lunar eclipse is. It’s the moon within Earth’s shadow.

When the sun, the Earth and the moon are aligned in space (nearly or perfectly), with the Earth between the sun and moon, then Earth’s shadow falls on the moon’s face. That’s when people on Earth see the shadow gradually turn a bright full moon dark in a lunar eclipse.

As seen from Earth’s surface, there are typically two or more lunar eclipses every year. Some are total, some are partial, some are a subtle kind of eclipse known as penumbral. 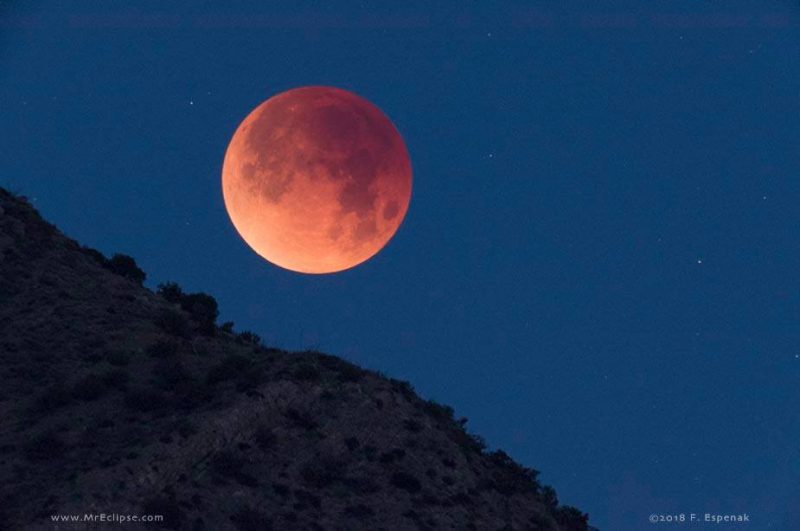 Eclipse guru Fred Espenak in Arizona – whose calculations of eclipses have been a mainstay of eclipse observing for decades – wrote of the January 31, 2018, total lunar eclipse: “What a wonderful total lunar eclipse! This was my 30th, and the 1st one I’ve seen where the moon set during totality.” 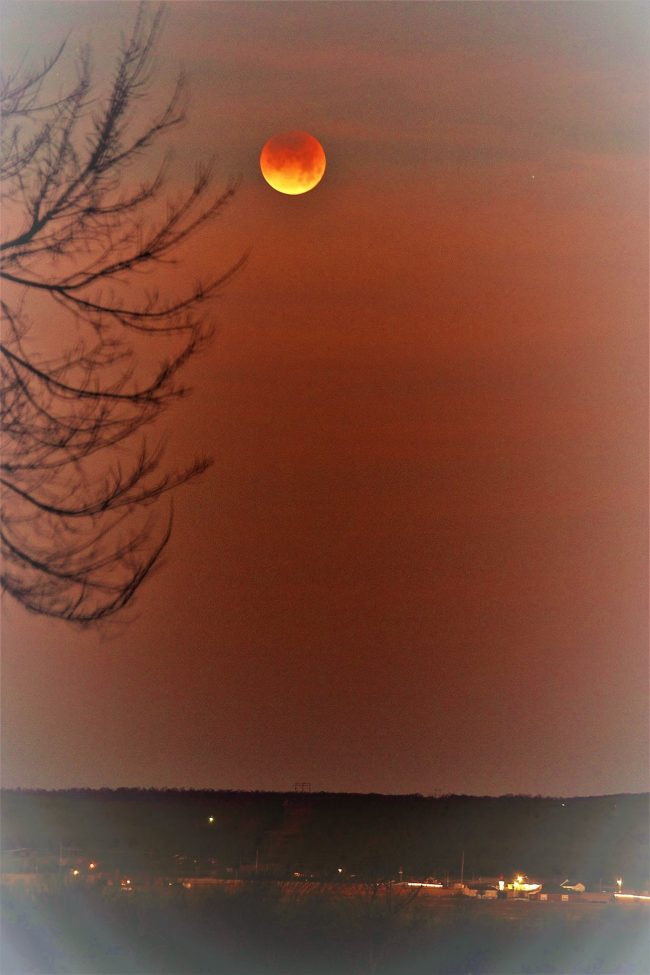 Mike O’Neal submitted this gorgeous shot of the January 31, 2018, lunar eclipse. He wrote: “Could not quite get to full before the clouds rolled in over northeastern Oklahoma.”

Another way to get an awareness of Earth’s shadow is simply to think about it as seen from space.

The image below provides a beautiful global view of Earth at night. It’s a composite image, assembled from data acquired by the Suomi National Polar-orbiting Partnership (Suomi NPP) satellite over nine days in April 2012 and 13 days in October 2012.

The dark part is, of course, Earth’s shadow.

Bottom line: Look for Earth’s shadow in both the evening and morning sky. It’s a blue-gray darkness in the direction opposite the sun, darker than the twilight sky. The pink band above the shadow – in the east after sunset, or west before dawn – is called the Belt of Venus.