Scientists have discovered unique bacteria and fungi in one of the driest places on Earth.

Scientists have discovered unique bacteria and fungi inhabiting the dry volcanic slopes that dot the Atacama region in South America. The newly discovered microbes were genetically distinct from many other microorganisms that are known to exist on Earth. The research was published on June 26, 2012 in the Journal of Geophysical Research.

The Atacama Desert, located at the base of the Andes Mountains in South America, is thought to be the driest place on Earth. In the core of the desert, rainfall averages less than 5 millimeters (0.2 inches) per year, and decades can sometimes pass without any rainfall whatsoever.

Environmental conditions are also very harsh on the slopes of two Atacama volcanoes, Volcán Socompa and Volcán Llullaillaco, where scientists discovered the new microbes. In addition to being extremely dry despite the occasional snowfall, the soil surface is exposed to intense ultraviolet radiation and it experiences huge daily swings in temperature that can range from freezing lows of -10 degrees Celsius (14 degrees Fahrenheit) to soaring highs of 56 degrees Celsius (132.8 degrees Fahrenheit).

To look for the presence of life in the high-altitude, martian-like landscape, scientists collected soil samples from an elevation of roughly 6000 meters (19,685 feet), and analyzed the samples for the presence of microbial DNA. The expedition was part of a broader global study of biodiversity in high altitude environments of the Andes, the Rockies and the Himalayan mountain ranges. 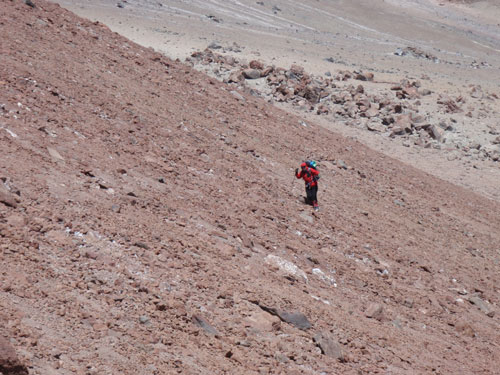 A scientists climbs the slopes of a volcano in the Atacama region in South America. Image Credit: Steven Schmidt.

The scientists found DNA evidence of bacteria and fungi in the soil samples, and many of the microbes appear to be unique species.

Ryan Lynch, a microbiologist with the University of Colorado and lead author of the study, commented on the findings in a press release. He said:

The study is believed to represent the highest terrestrial ecosystem yet analyzed for the presence of microorganisms. 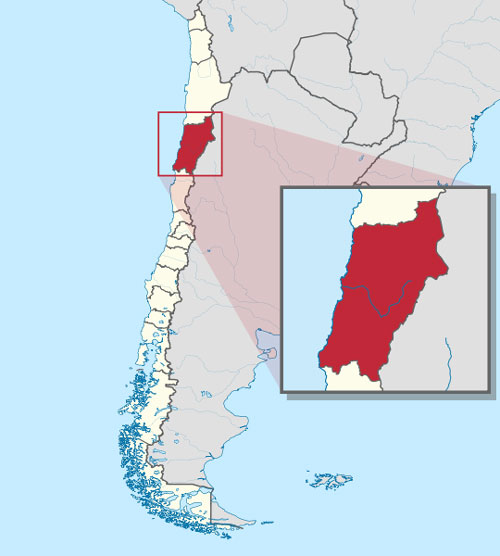 How microorganisms survive in the harsh Atacama climate is still a mystery. The scientists think that the microbes may only be active intermittently during episodes of favorable environmental conditions. Also, the microbes may possess metabolic machinery that allows them to derive energy, not from photosynthesis, but from chemical reactions that make use of diffuse atmospheric and volcanic gases such as carbon monoxide and dimethyl sulfide that are present in the area.

Steven Schmidt, a microbiologist at the University of Colorado and co-author of the paper is currently working with astrobiologists to improve the search for life on other planets. The Atacama volcanoes, with their thin atmosphere, high radiation and rocky terrain, are some of the most similar places on Earth to Mars. If past conditions on Mars were able to support life, that life might resemble something you may find in the Atacama region.

If we know, on Earth, what the outer limits for life were, and they know what the paleoclimates on Mars were like, we may have a better idea of what could have lived there.

The research was funded by the National Science Foundation, the National Geographic Society and the University of Colorado.

Bottom line: Scientists have discovered unique bacteria and fungi inhabiting the dry volcanic slopes that dot the Atacama region in South America. The newly discovered microbes are genetically distinct from many other microorganisms on Earth and the findings may help to improve the search for life on other planets like Mars. The research was published on June 26, 2012 in the Journal of Geophysical Research.