In 2012, scientists completed a first-ever study with detailed data on the limits of life that thrives deep in the cracks of hot undersea volcanoes, places called hydrothermal vents. The microbes that live in the ocean depths inhale hydrogen and carbon dioxide and exhale methane. And they might even give scientists answers to questions about alien life, beyond Earth. EarthSky spoke to study co-author and microbiologist James Holden of the University of Massachusetts at Amherst. He told us:

There is a tremendous, enormous amount of microbial biomass living within the Earth’s crust in the sediments. Some estimates are that it’s about 1/3 of the total biomass. Others have suggested that it may even rival the biomass that’s living on the surface of the planet. 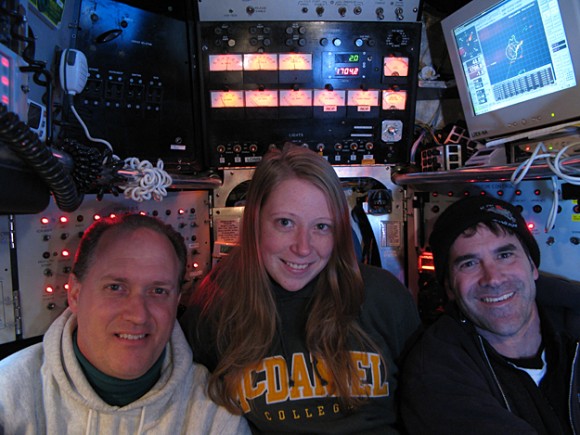 Dr. Holden’s lab took the research sub called Alvin out to hydrothermal vents in the Pacific Ocean, off the coast of the U.S. states of Washington and Oregon. They collected samples of microbes under the sea – then brought them back to their lab to grow them there – in order to test the limits of how much hydrogen these microbes need to grow.

Places such as Jupiter’s icy moon Europa, or even the dry desert landscape of the planet Mars, might have had hydrothermal vents and environments much like those in the deep sea of Earth. Holden said:

We think that if there is life, say, on Mars, or on Europa, then it’s going to be similar kinds of life. Life that’s independent of sunlight and life that’s independent of oxygen. So by understanding the life and the constraints on the life that lives in these hydrothermal environments, it gives us some idea of what to expect we can expect on these other planets and how we might be able to model this life, using computer models.

And that way, if we do look for life on Mars, where should we look for it? And what should we be looking for? It’d be based on what we know that’s here in similar environments on Earth. 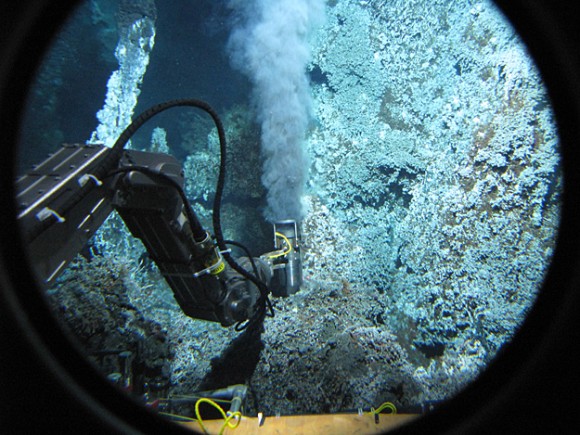 Undersea vehicle Alvin extends its mechanical arm to a high-temperature black smoker in the ocean depths. This image is from what scientists call the Endeavor Segment, at the Juan de Fuca Ridge in the Pacific Ocean Image via Bruce Strickrott/WHOI.

Holden said there might still be some hydrothermal activity on Mars today.

We think that there was past hydrothermal vent activity on Mars. And there may still be some hydrothermal activity on Mars today. We don’t really know. So it’s possible that there still is water circulating in the crust of Mars that’s being driven by a heat source and has some gas coming to it. Or that this certainly happened in the past.

So, because there’s liquid water, and there’s volcanic activity, there may be hydrothermal vents deep below the ice on Europa as well. 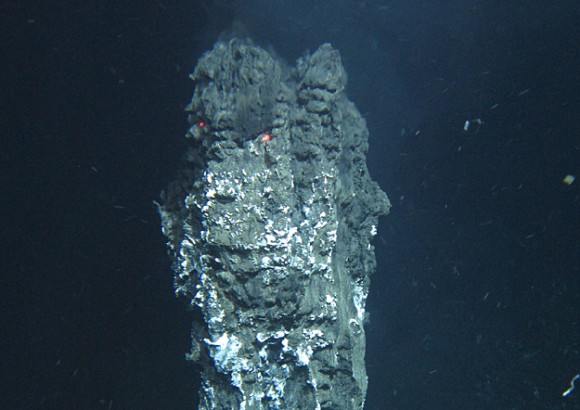 He said this research would lead to a greater understanding of how life in general functions.

Life is remarkably flexible, especially microbial life. It is capable of metabolizing all sorts of things that we can hardly dream of – consuming different types of gases and reacting with metals, rocks, and all sorts of different things. Hydrothermal vents give us an opportunity to really explore and understand just how diverse life is, and how it is that life can live in really extreme conditions and in extreme environments

And from that, we can begin to understand the primary principles of how life functions.

That understanding opens up all sorts of possibilities – in medicine, in technology, in the search for life elsewhere – if we can understand those basic principles of how life operates.

Bottom line: Scientists have completed a first-ever study with detailed data on the limits of life that thrives deep in the cracks of hot undersea volcanoes, place called hydrothermal vents. The microbes that live there inhale hydrogen and carbon dioxide and exhale methane. And they might even give scientists answers to questions about alien life, beyond Earth. That’s according to study co-author and microbiologist James Holden of the University of Massachusetts at Amherst.