Typhoon Rammasun is thrashing the Philippines

An intensifying typhoon slammed into the Philippines earlier this morning (July 15, 2014) between 5-7 a.m. EDT(9-11 UTC). Typhoon Rammasun, also called Glenda in the Philippines, produced wind speeds of at least 185 kilometers per hour (115 mph) which is equivalent to a Category 3 storm. The forecast was for the typhoon to intensify as it approached the Philippines. Unfortunately, the forecast verified as the storm developed a distinct eyewall prior to making landfall today. The storm made landfall around southeastern Luzon just north of Legaspi. The storm is expected to move across the Philippines throughout the day today and produce extremely heavy rainfall that could produce flash flooding and mudslides.

Flooding is already occurring in Manila, and flood and wind damage in the city have to potential to make Rammasun one of the top 10 most expensive natural disasters in Philippine history.

Hurricane Central at weather.com summed it up this way:

– Worst impacts to the north of Haiyan (Yolanda) ravaged areas

– Rammasun is a threat to southern China and northern Vietnam late this week. 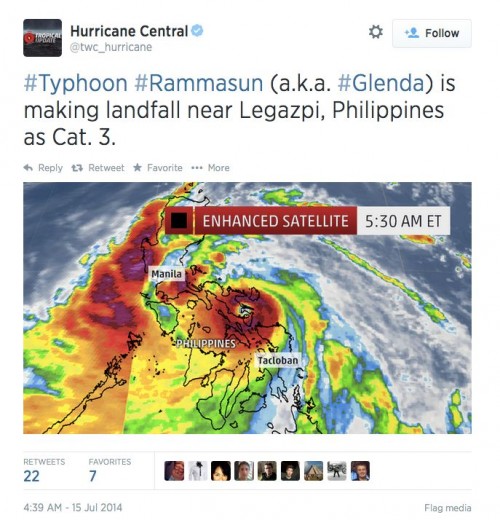 Over 2,100 people, many of whom still living in tents after Haiyan, were evacuated to the Tacloban Astrodome, given the wind forecast.

Typhoon Rammasun is expected to push across the Philippines but is expected to maintain typhoon status of 175 kph/110 mph as it passes very close to Manila. It will continue to advance to the northwest as it moves over the open waters of the South China Sea. The storm is expected to stay north of the Paracel Islands and could make a second landfall in Hainan near the city of Haikou packing sustained winds of 190 kph/120 mph/105 knots on Friday, July 18.

With this in mind, the Joint Typhoon Warning Center is expecting Rammasun to intensify again as it traverses through the South China Sea where sea surface temperatures are extremely warm, especially near the areas where it intensified. In fact, sea surface temperatures were over 30 degrees Celsius (86°F) which is more than favorable for tropical cyclone intensification along the east coast of the Philippines.

It is one of the many reasons why the storm intensified so quickly prior to making landfall.

Storm chaser James Reynolds traveled to Legazpi and experienced both the eye and eyewall of Rammasun (Glenda) Tuesday. 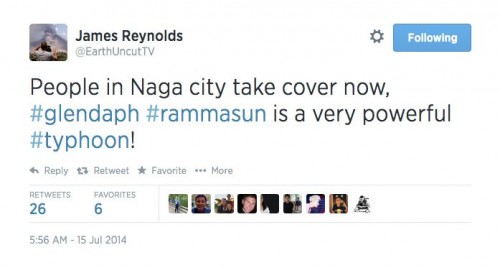 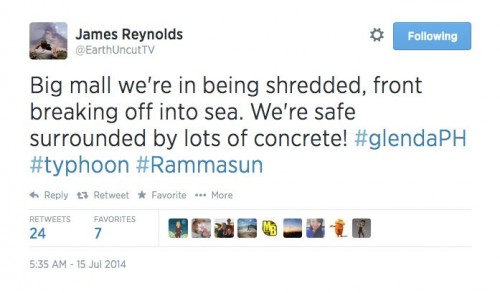 Rainfall from Rammasun across the Philippines looks quite impressive. Some areas could see over 300 millimeters (mm) or 11 inches of rainfall, especially south of Manila. The heavy rainfall rates could cause substantial flooding and produce several mudslides across the region.

Bottom line: Typhoon Rammasun intensifed before making landfall earlier today (July 15, 2014). It is expected to bring storm surge flooding, damaging winds, flash flooding and mudslides to the Philippines and to have typhoon status of 175 kph/110 mph as it passes very close to Manila. The storm will weaken while over the Philippines, but then is expected to intensify again as it moves over open waters to southern China and northern Vietnam later this week. Rammasun is the strongest typhoon to strike the Philippines since last year’s Super Typhoon Haiyan (Yolanda).

Thank you! Your submission has been received!
Oops! Something went wrong while submitting the form.
END_OF_DOCUMENT_TOKEN_TO_BE_REPLACED