Whether they are stumbled upon or searched for in a methodological manner, thousands of new species are discovered each year. This year’s picks for the top 10 new species of 2014 include an Antarctic sea anemone, a gecko with a tail shaped like a leaf, and a furry carnivore that is closely related to raccoons.

The top 10 new species of 2014, in alphabetical order of their scientific names, are as follows:

1. Olinguito (Bassaricyon beblina). Olinguitos are reclusive carnivores that live amongst the trees in the cloud forests of Colombia and Ecuador. They are closely related to raccoons (family Procyonidae). 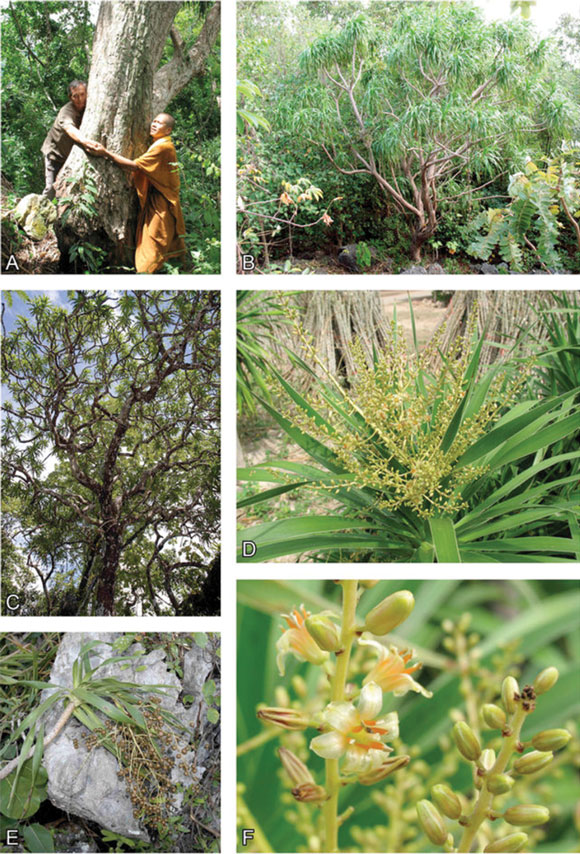 2. Kaweesak’s Dragon Tree (Dracaena kaweesakii). Kaweesak’s Dragon trees grow on top of limestone mountains in Thailand and Burma. The trees can reach up to about 12 meters (39 feet) in height. Only about 2,500 of these trees are thought to exist in the wild.

3. Andrill Anemone (Edwardsiella andrillae). These small sea creatures, which are less than 2.5 centimeters (1 inch) in length, were discovered living on the underside of a glacier on the Ross Ice Shelf in Antarctica. This species was named Andrill after the Antarctic Geological Drilling Program, which sent out the remotely operated vehicle that first discovered the new type of anemone.

4. Skeleton Shrimp (Liropus minusculus). Skeleton shrimps are tiny marine crustaceans, hence the name minusculus. They belong to a diverse family of shrimps (Caprellidae) that can be found throughout the oceans, but this new unique species was discovered in a cave on Santa Catalina Island, which is located off the coast of Southern California.

5. Orange Penicillium (Penicillium vanoranjei). This new fungus was discovered living in soil in Tunisia. It secretes an extra-cellular matrix that may help to protect it from drying out during times of drought. Colonies of this fungus are bright orange in color. It was named vanoranjei in honor of the Dutch royal family.

6. Leaf-tailed Gecko (Saltuarius eximius). These leaf-tailed geckos live on rocky terrain in the rainforests of northeastern Australia. Their mottled brown and cream colors keep them camouflaged against the backdrop of rocks and lichens, as does their tail, which is flattened into the shape of a leaf.

7. Amoeboid Protist (Spiculosiphon oceana). Amoeboid protists are single-celled organisms. The new amoeboid protists are a type of foraminifera that were discovered in an underwater cave off the southeastern coast of Spain. They are unusually long relative to other protists and can range up to 4 to 5 centimeters (1.6 to 2 inches) in length. Amoeboid protists collect stiff sponge fragments from the seafloor and use them to construct a spiny shell that can ensnare prey.

8. Clean Room Microbes (Tersicoccus phoenicis). Clean rooms are sterilized work spaces that are used in a variety of scientific fields including medicine and space science. Unfortunately, sterilization resistant microorganisms occasionally make an appearance in clean rooms. Such was the case when this new type of bacteria was found in Mars Phoenix spacecraft assembly facilities. It was aptly named phoenicis after the Mars Phoenix lander.

9. Tinkerbell Fairyfly (Tinkerbella nana). Fairyflies are one of the smallest types of insects on Earth. They belong to a diverse family (Mymaridae) of parasitoid wasps. The newly discovered Tinkerbell fairyflies top out at about 250 micrometers (0.00984 inches) in size, and they were discovered in a forest at the LeSelva Biological Station in Costa Rica. The fairyflies have feathery looking wings. They were named after the characters Tinker Bell and Nana in the play Peter Pan written by J. M. Barrie.

10. Domed Land Snail (Zospeum tholussum). Domed land snails have very small translucent shells. One specimen of this new species was discovered deep within a cave in western Croatia, but several empty shells were found nearby.

The top 10 species lists are put together by taxonomy experts associated with the International Institute for Species Exploration (IISE). These experts examine new reports of species discoveries in the previous year and select 10 to feature in their yearly review. The top 10 list is released in May to honor Carolus Linnaeus, the renowned 18th century botanist, whose birthday falls on May 23. Linnaeus devised the first widely accepted system for naming species. I thought it would be worthwhile to mention this list again at the close of 2014.

In 2011, a group of scientists estimated that there are perhaps 8.7 million species on Earth and that about 86% of existing species have yet to be discovered. I can’t wait to see what next year’s list will look like.

Bottom line: Thousands of new species are discovered each year. This year’s picks for the top 10 new species of 2014 include an Antarctic sea anemone, a gecko with a tail shaped like a leaf, and a furry carnivore that is closely related to raccoons. The top 10 species lists are put together by taxonomy experts associated with the International Institute for Species Exploration (IISE).

Thank you! Your submission has been received!
Oops! Something went wrong while submitting the form.
END_OF_DOCUMENT_TOKEN_TO_BE_REPLACED