Scientists have identified more than 2,800 bacterial species that were deposited onto Mt. Bachelor, Oregon during two trans-Pacific dust plume events in 2011.

Not all bacteria are hardy enough to survive the harsh conditions present in the upper atmosphere. However, the ones that can survive are capable of some serious long-range transport. In a paper to be published in the February 2013 issue of Applied and Environmental Microbiology, scientists identified more than 2,800 bacterial species that were deposited onto Mt. Bachelor, Oregon during two trans-Pacific dust plume events in 2011. The dust is thought to have originated somewhere near China, Korea or Japan.

Each year strong winds blowing over arid lands in Asia pick up and deposit up to 70 million tons (64 teragrams) of aerosols onto the continent of North America. These aerosols are composed of particles of dust, debris and microorganisms. The aerosols are often transported during dust plumes events that can take as little as 7 to 10 days to cross the Pacific Ocean.

Scientists took samples of two trans-Pacific dust plume events from the top of Mt. Bachelor in Oregon during the spring of 2011. They extracted DNA from the samples and sequenced it to determine what types of microorganisms were present in the dust plumes. They found over 2,800 different bacterial species (or operational taxonomic units) at the peak of the plume events. 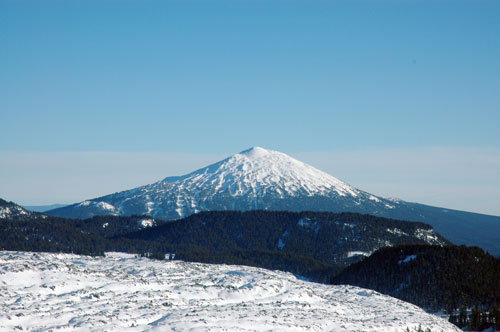 Many of the microorganisms present in the samples can also be found in background air samples, the scientists say. The scientists think that the trans-Pacific dust plume events were noteworthy because of the elevated amounts of microorganisms they were depositing onto Mt. Bachelor. A few species of marine archaea were found only during plume events, and these species have never been seen before at high altitudes.

David Smith, lead author of the study and graduate of the doctoral program in astrobiology at the University of Washington, commented on the findings in a news release. He said:

The long-range transport and surprising level of species richness in the upper atmosphere overturns traditional paradigms in aerobiology. It’s a small world. Global wind circulation can move Earth’s smallest types of life to just about anywhere.

Smith says that future research aimed at understanding how bacteria can survive at high altitudes could be invaluable to the fields of biotechnology and medicine. 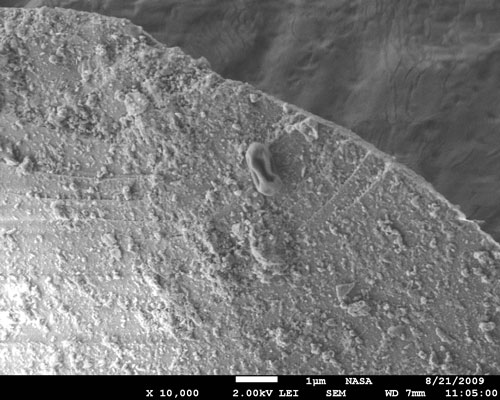 Raisin shaped bacterial spore that hitchhiked on a grain of dust across the Pacific Ocean. Image Credit: NASA.

Funding for the research was provided by the National Science Foundation, the National Geographic Society, NASA’s Astrobiology Institute and the University of Washington.

Bottom line: Scientists have identified over 2,800 bacterial species that were deposited onto Mt. Bachelor, Oregon during two trans-Pacific dust plume events in 2011. The dust is thought to have originated somewhere near China, Korea or Japan. The results of their research will be published in the February 2013 issue of Applied and Environmental Microbiology.