Large amounts of oxygen released by ocean plankton made Earth’s atmosphere breathable for the first time in history. This happened about 500 million years ago.

About 500 million years ago, the Earth, for the first time, attained an atmosphere that we would consider breathable. A perfect storm of conditions allowed photosynthetic plankton to release large amounts of oxygen into the atmosphere. Evidence of this event was found in the chemical composition of 500-million-year-old rocks by Matthew Saltzman of Ohio State University and his colleagues, and reported in the February 21 edition of the Proceedings of the National Academy of Science.

Today, the atmosphere holds about 21 per cent oxygen. Over the Earth’s 4.6 billion year history, oxygen did not appear in the atmosphere until perhaps about 2.5 billion years ago. Since then, oxygen levels have fluctuated in tandem with global geological and biological events, such as mass extinctions.

When the first simple organisms appeared in the oceans more than 3.5 billion years ago, the atmosphere was mostly nitrogen, hydrogen, water vapor, and carbon dioxide. Some scientists speculate that these organisms were similar to microbes found in hydrothermal vents, which derive their energy via chemosynthesis from gases like methane and hydrogen sulfide spewed from the vents.

Not long after, possibly about 3 billion years ago, the first photosynthetic organisms had evolved and begun releasing oxygen, much of it used up in geological processes. The rest started to slowly accumulate in the atmosphere. (The history of oxygen on early Earth is quite complex and fascinating. Check out the Wikipedia “Great Oxygenation Event” for more information.)

During the Cambrian period, there were at least four major extinction events where some species of organisms were wiped out to be replaced by others. This could have been one of the causes of the great diversity of life that evolved during that period.

One of those extinction events occurred 500 million years ago. The amount of oxygen in the ocean dropped dramatically, a condition called anoxia, wiping out many free-floating and bottom-dwelling organisms in the sea. This geologic event, known as the Steptoean Positive Carbon Isotope Excursion (SPICE), was characterized by the burial of large amounts of organic matter on the ocean floor.

We still don’t know why the anoxia spread all over the world. We may never know. But there have been many other extinction events in Earth’s history, and with the exception of those caused by meteor impacts, others likely share elements of this one – changes in the balance of oxygen and carbon dioxide in the atmosphere and oceans.

The SPICE event is also associated with a subsequent surge of oxygen into the atmosphere, with levels climbing from about 10 to 18 percent to as high as 28 percent, followed by a slow decline. Saltzman and his colleagues found evidence that the dramatic increase in atmospheric oxygen was caused by plankton in the ocean.

The evidence was found in fossils called acritarchs. Rock samples containing these fossils, from the US, Australia, and China, preserved an indirect record of the amount of oxygen in the atmosphere, in the form of carbon isotopes. Isotopes of an element have the same number of protons but different numbers of neutrons. There are two stable carbon isotopes in nature: the most common, C-12, has 6 protons and 6 neutrons; but about 1.1 percent is C-13, with 6 protons and 7 neutrons. In an atmosphere with high levels of oxygen, photosynthesis within plankton favored carbon-12 over the heavier carbon-13, a signature that was preserved in the fossil record.

Cambrian-Ordovician rock succession at Shingle Pass in the Egan Range of Nevada. The SPICE carbon isotope event is in Late Cambrian strata at the far left side of the picture, and the succession becomes younger into the Middle Ordovician toward the right. Plankton and animal biodiversity increases from the Cambrian to Ordovician (left to right). Image Credit: Matthew R. Saltzman, Ohio State

When the SPICE event occurred – when large amounts of organic matter were buried on the sea floor, possibly from large die-offs of plankton – it opened up a niche in the sea for other organisms to fill. Photosynthetic plankton took advantage of the situation, pulling carbon dioxide out of the atmosphere and releasing large amounts of oxygen. This outpouring of oxygen 500 million years ago created an atmosphere that we would consider breathable. It peaked over a few million years, then slowly declined slightly, varying at different levels over the subsequent geological history of the Earth. Photosynthetic plankton thrived and diversified. Their role at the bottom of the food chain had a ripple effect that led to the diversification of higher marine organisms for the next 40 million years, into another significant time in the evolutionary history of life known as the Great Ordovician Biodiversification Event (GOBE). 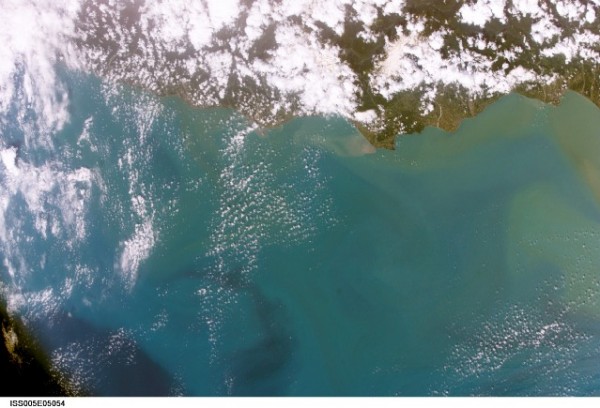 Related posts:
Daniel Sigman on ocean algae and global cooling of the past