Posted by
Matt Daniel
and
Deborah Byrd
and

UPDATE NOV. 8, 2013, 4:30 CDT (1030 UTC): Super Typhoon Haiyan – Yolanda, as the storm is known in the Philippines – on Thursday, November 7, became the strongest typhoon or hurricane of 2013 and one of the strongest storms ever recorded. The storm plowed across the Philippine islands after making landfall on Samar, in the region of Eastern Visayas, with maximum sustained winds at 195 mph. That’s well above the Category 5 classification used for Atlantic and East Pacific hurricanes and just 6 mph shy of an EF-5 tornado. Plus there were gusts up to 235 mph. Both the BBC and CNN are reporting 3 dead at this time. According to CNN:

Three people were reported dead, more than 100,000 took refuge in evacuation centers and hundreds of flights were canceled. 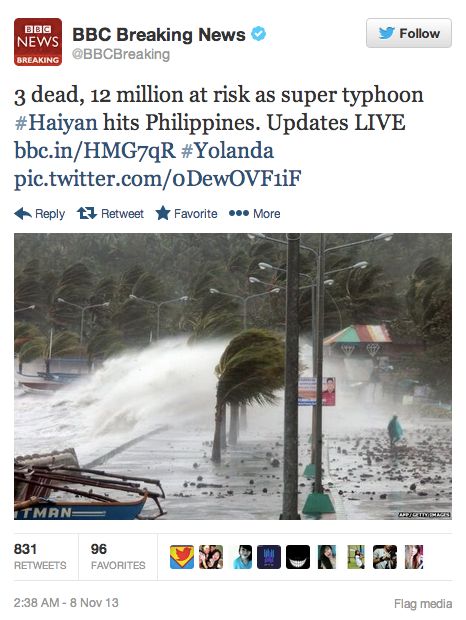 Yolanda or Haiyan is one of the worst storms on Earth, ever. The Global Disaster Alert and Coordination System (GDACS) had said on November 6:

Tropical Cyclone HAIYAN-13 can have a high humanitarian impact based on the maximum sustained wind speed and the affected population and their vulnerability.

The U.S. Navy’s Joint Typhoon Warning Center had earlier said it expected the storm to weaken as it crossed the ocean to the Philippines. Instead, Haiyan intensified and accelerated as it moved closer to the country. Why? According to NOAA’s Visualization Laboratory, deep warm water in the Pacific fueled Haiyan’s intensification. NOAA said that “ideal” environmental conditions for intensification – namely low wind shear and warm ocean temperatures – exist in the Pacific now. See the orange-ish image below.

ORIGINAL POST, NOV. 6, 2013: Haiyan will become the fifth storm to directly affect the Philippines this year. According to Jeff Masters of Weather Underground, four storms have directly impacted the Philippines killing 30 people. The strongest of these, Typhoon Utor, which had sustained winds of 140 mph, hit the Philippines on August 12, 2013 and cost $25 million dollars in damage.

The Philippines typically average eight to nine storms per year, so activity has been slightly below average. However, the overall Western Pacific Typhoon season has been very active, especially north of the Philippines. So far in 2013, we have seen 28 named storms. The last time we had this much activity was back in 2004, when we recorded 32 named storms. In general, the Western Pacific is an area likely to spawn some of the strongest tropical cyclones in the world.

Haiyan will continue to push to the west-northwest and push into the Philippines by Friday morning. Haiyan has significantly strengthened over the past 24 hours from a minimum typhoon to a super typhoon. It has great outflow and very deep convection with a symmetric eye. It is likely that Haiyan will slightly weaken as it undergoes an eyewall replacement cycle. For now, the Joint Typhoon Warning Center is expecting Haiyan to strike the Philippines as a Category 4 storm with sustained winds of 145 mph. Haiyan has the potential to create significant damage, flooding, and mudslides along a very populated area.

Bottom line: Super Typhoon Haiyan – now the strongest such storm of 2013 – will slam into the Philippines Friday morning and produce damaging winds and flooding rains. Evacuations are already underway as the storm pushes to the west-northwest at 20 mph. Heavy rain, damaging winds, flooding, and mudslides are likely as it pushes over the country Friday.

Thank you! Your submission has been received!
Oops! Something went wrong while submitting the form.
END_OF_DOCUMENT_TOKEN_TO_BE_REPLACED